Artificial Sweeteners Are Not Harmful For Gut Microbiota, They Are Even Prebiotics
By Hank Campbell | February 21st 2019 09:02 AM | Print | E-mail

Hank Campbell
Food is plentiful and affordable, and that has brought an increase in consumption of foods that matched an ancient evolutionary mandate; sweetness.

In ancient times, humans knew that sweetness meant more calories and in a world where they often weren't sure where the next meal would come from, getting as many calories when they were available was important. When agriculture came into existence, farmers began genetically modifying foods to be bigger and sweeter. Beginning in the late 1980s, science gave us a true food boom, with more food grown on less land with less environmental strain than thought possible when claims of a "population bomb" by authors such as Paul Ehrlich and John Holdren were popular.

Even then the calorie problem was well-known, so science had come up with a way to mimic the sweetness of table sugar without the calories. They were called artificial sweeteners, labeled such at a time when the public were a little more grounded in science and didn't assume artificial was bad.

Almost immediately, trial lawyers at groups like Center for Science in the Public Interest began claiming these artificial sweeteners were harmful to humans. When their war on all saccharin, the first popular noncaloric sweetener, failed, those groups began to focus on diet soda. They dropped scary-sounding chemical names like formaldehyde and since most of the public are not aware that formaldehyde is also produced naturally, and that to get enough formaldehyde in a diet soda to have an impact requires ingesting 7,000 cans per day, they had some success. Even now a Goop or Whole Foods shopper will casually state that diet soda is "bad" for you.

The science doesn't show that, even in new fronts that has been opened up with microbiome hype. With gut microbiota the focus of supplement marketing, and claims that nurturing the microbiome can help with weight gain, eating disorders, cancers, gut diseases, and even autismn, there is a new wave of 'artificial sweeteners are bad for you' claims but a new review shows the data are not there.

Noncaloric sweeteners, like other food additives, are under the control of government bodies like the U.S. Food and Drug Administration (FDA) and the European Food Safety Authority (EFSA). Some governmental bodies abdicate their authority to organizations like the Joint FAO/WHO Codex Alimentarius or the International Agency for Research on Cancer (IARC). While they vary in international prestige, the FDA is the gold standard for the world while France's controversial IARC is the least credible of the prominent groups, none of them found harm in artificial sweeteners.

Not even IARC, whose statisticians adopted the flawed belief that five orders of magnitude for dose is legitimate, and it is usually quite easy to suggest harm if a teaspoon of something is considered the same dose as 10,000.

Simply put, these products would be removed from the market if they were harmful.

Artificial sweeteners don't cause harm - if you believe in prebiotics, they even help

A recent review of claims that diet soda are bad for gut microbiota show it isn't so. Instead, low‑calorie sweeteners seem to have beneficial effects since they act as prebiotics, which are said to be foods that good gut bacteria consume.

You read that right, diet soda is as beneficial as that fancy yogurt sold by actors. 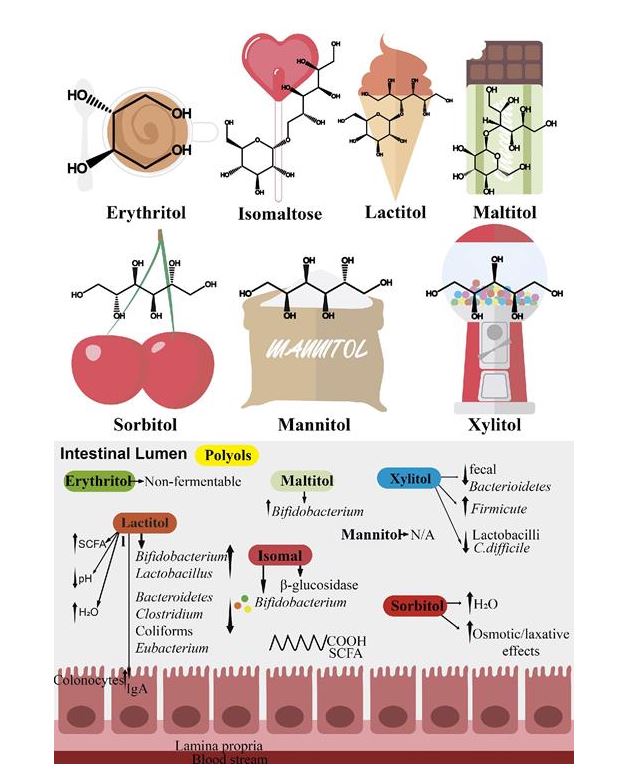 Effects of polyols on gut microbiota composition. Erythritol, sorbitol, and mannitol do not affect the composition of the gut microbiota; however, lactitol, isomaltose, xylitol, and maltitol provoke shifts in the gut microbiome, increasing bifidobacteria numbers in healthy people. The laxative effects of polyols need to be considered when they are consumed by patients with inflammatory bowel disease. C. difficile, Clostridium difficile; N/A, not available. Source: DOI: 10.1093/advances/nmy037

The review covered natural sweeteners (1),  synthetic sweeteners (2), and sugar alcohols and polyol sweeteners (3) to examine their effects on the composition of microbiota in the human gut. Obviously you should see the paper to find details on everything they reviewed.

There was no harm. There were some changes with saccharin and sucralose but there are also changes if you drink water, black coffee, or coffee with honey. They aren't negative effects.

What explains the prebiotic impact? “Sweeteners based on amino acid derivatives don’t exert great changes on gut microbiota due to their low concentration and because those amino acids are absorbed by the duodenum and the ileum," says co-author Ángel Gil, professor of Biochemistry and Molecular Biology from the University of Granada (sUGR) and President of the Iberoamerican Nutrition Foundation. "With respect to polyol sweeteners ... which are poorly absorbed or even not absorbed at all, they may have prebiotic actions and can reach the large bowel and increase the numbers of bifidobacteria in animals and humans.”

Every sweetener approved in the U.S. or Europe is safe and its impact on gut bacteria is meaningless, but the take home message remains use common sense: don't try and drink 7,000 diet sodas per day, don't drink 12 shots of whisky all at once, don't participate in a radio call-in water chugging contest. It's not the food harming us, it's what we do with it.