Celery Juice Joins Acai, Quinoa, And Curry In Being Goop Endorsed "Miracle Foods" That Do Nothing
By Hank Campbell | February 5th 2019 08:09 AM | Print | E-mail

Hank Campbell
I got a butter shaper for Christmas. I asked for one because I make lot of butter in a mason jar and then just throw it in tupperware but my friends sometimes want butter and it feels a little dismissive to just hand them tupperware.

Imagine my disappointment when I read the instructions which stated that it needed to be treated with "Organic Coconut Oil." Butter used to be something almost everyone made and now it was the providence of uninformed hippies, it seems. Or maybe this company was trapped in 2016?

Because that is the last year Coconut Oil was being touted as essential for anything.(1)  It burns fat and curbs hunger! It will help with diabetes, Crohn's disease, irritable bowel syndrome and thyroid problems, we were told by Dr. Oz and others, because it has medium-chain triglycerides rather than long chain.  It all sounded very science-y, but it was also nonsense(2) and now coconut oil is dismissed as a giant vat of saturated fat, just like every other vat of saturated fat, just like it was decades ago.

Ask a pro-science dietitian or nutritionist (so, not the ones selling NY Times diet books or appearing on Dr. Oz) and they can identify almost any year if you give them the name of a superfood. See how well you do; chia seeds, apple cider vinegar, acai berries, chaga mushrooms, sea vegetables. At some point if it has a catchy name it will make its way into being a superfood. On Twitter I was only half joking when I recently predicted 2019 would be the year beef jerky becomes a superfood, because Whole Foods shoppers will buy it when it's called something African like Biltong.

It's not just an American thing brought about because Harvard Chan School of Public Health epidemiologists need to publish papers, a U.K. analysis of a four-year period found 106 foods had been tackled by corporate journalists; 65 were miracle foods, 27 were dooming us, and 14 were both. If we want that sort of mindless food frequency questionnaire 'press release of the day' churnalism we can just read WebMD. 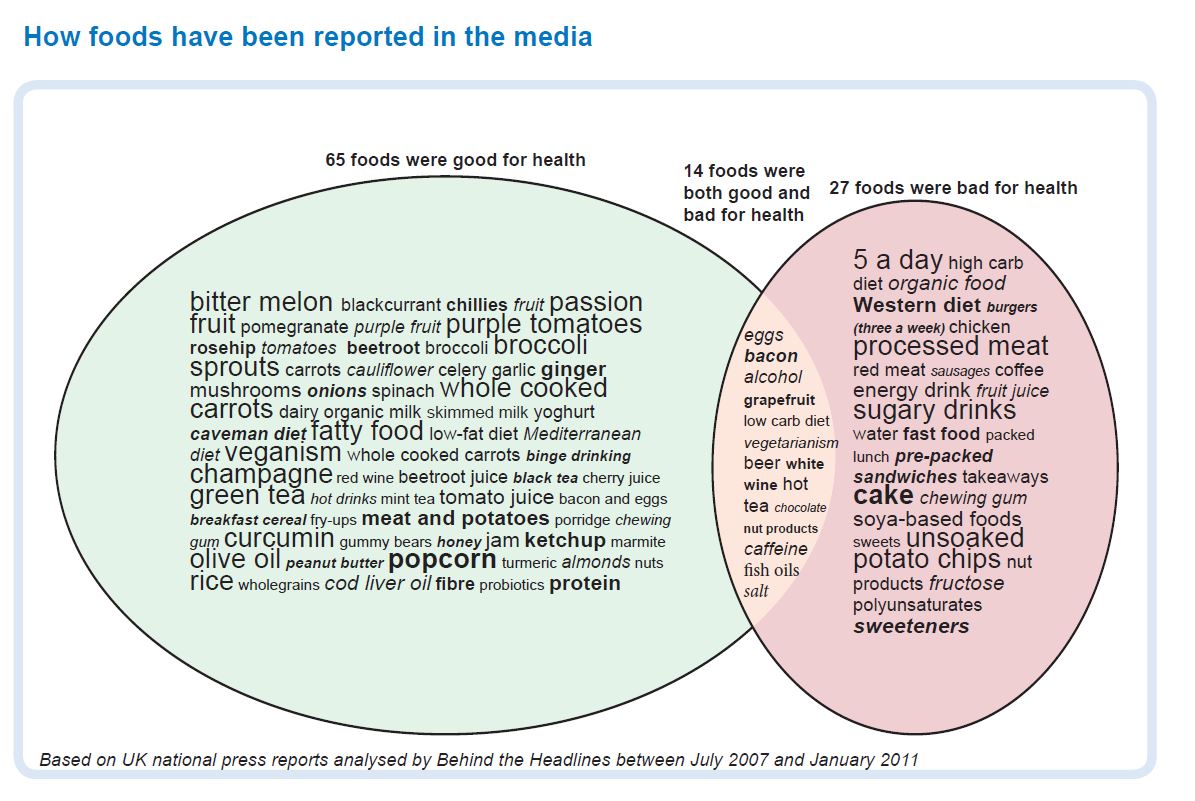 Which brings us to the latest Goop (Gwyneth Paltrow's alternative to science and medicine site) assault on common sense; celery juice.

Here is a piece written by "medical medium" Anthony Williams there. Maybe he calls himself a medical medium because his cures are ghosts. They certainly won't help anyone outside the astral plane, my seventh chakra went into retrograde just reading this: 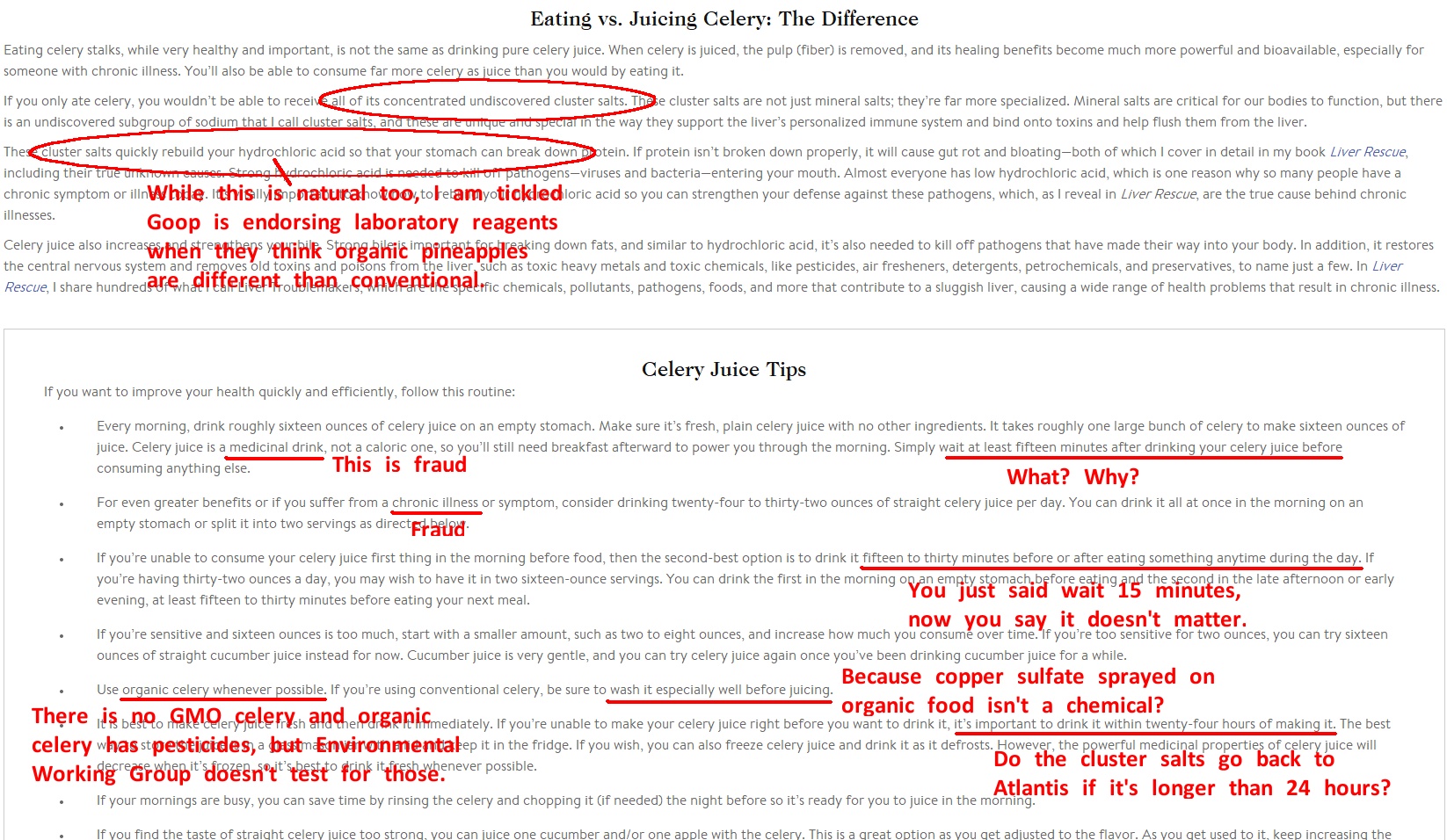 You'll need to click it to see the notes.

I'd never heard of these biological cluster salts so I had to Google them. Sure enough, he is the top search listing on Google because he made it up and says stupid old science just hasn't figured them out yet...

In The Telegraph, Maria Lally notes the problem may be getting worse, with 67,000 #celeryjuice posts popping up on Instagram.  And she cites registered dietitian Helen Bond who rightly notes that by juicing it you are removing the pulp, which our Health Whisperer at Goop claims makes the cluster salts more "bioavailable." Or something. He doesn't make a lot of sense.

But that is the whole point. Science-y sounding terms like phytosterols and diuretic properties make a great word salad, but since Goop wants you to juice it, their word salad won't even have the fiber benefits, it will just leave an icky taste in your mouth.

But if Goop is selling this stuff it's coming to a head, and that means like a pimple it will soon pop, and we can all get back to Martini Diets or Tapeworm Diets or whatever will become will circle around again.

(1) In my rural Pennsylvania youth, there were a lot of Amish people nearby and they made great butter. If they flew somewhere and to get coconut oil and then flew it back to use in butter molds they kept their journeys undocumented.

(2)  Also nonsense: Anything that claims it will make you look like a Kardashian without surgery. And everything that appears on Healthline.com
Science 2.0
More Articles All Articles
About