Coronavirus Has Caused Democrats To Move Back Toward Trust In Science
By Hank Campbell | May 21st 2020 09:49 AM | Print | E-mail

Hank Campbell
A year ago, and for this entire century, the nexus of anti-vaccine beliefs and other denial of science has been Democratic states. While places like Mississippi and Alabama had vaccine rates near 100 percent, an infectious disease crisis that began on the west coast forced politicians in California, where kids without vaccines totaled more than the other 49 states combined, to shuck off their wealthiest constituents and mandate them. (1)

Then COVID-19 took the world by storm and  all of that changed.

Wealthy people now demand a vaccine. California Governor Gavin Newsom, who had signed the vaccine law with trepidation because the wealthy elites opposed to vaccines are his largest donors, defied arguments that President Trump's restrictions were xenophobic and pointless, and put the state in lockdown.(2)

Some, like CNN journalist Chris Cuomo and his wife, still promote 'energy medicine', 'oxygenated herbs, marijuana oil, Peruvian tree bark, hemp, tinctures, organic food, and supplements, and the New York Times wonders if astrologers predicted the pandemic and what it's like to quarantine with a ghost, but most of the left has rushed to fill their homes with Lysol, Purell, and Clorox. They accept that social distancing helps.

Science is back in fashion among Democrats.

Obviously, there is no Party of Science, though both Republicans and Democrats try to wrap themselves in that flag. And I noted anti-GMO, anti-vaccine and energy science denial and how they are strongest on the left but one field is more strongly accepted by Democrats; climate change. Yet even that might teach some things about the underlying psychology of science acceptance, and how COVID-19 fits.

What do claims that safe levels of common chemicals are endocrine "disruptors", that medicine is a corporate conspiracy, that masks should be mandated by government, and that GMOs cause health problems share in common? They are all doomsday narratives, as are recent concerns about 200 foot sea level rises due to climate change.

Running a pro-science nonprofit I can tell you one thing with absolute evidence; telling people their food is safe is a terrible call to action. If an environmental lawyer tells you a Dow chemical is going to kill you, you are a lot more inclined to send them money if they insist their lawyering will stop it than you are to send us money if we show the chemical is safe unless you fall into a vat of it and drown. There is a reason environmental group funding dwarfs the pro-science side by 2,000X.

So a new Pew survey that shows Democrats are more inclined to accept coronavirus concerns might be a sign that they are lurching back toward medicine, or it might be an indicator some like the doomsday narrative aspect of it, in the same way some Republicans can make coronavirus masks a Deep State conspiracy.

Democrats believe in American Exceptionalism - when it comes to doomsday

In the survey, 66 percent of Democrats say they believe America has been hit harder by coronavirus than the rest of the world, but only 30 percent of Republicans think that.

Even when it comes to doomsday they make it about American Exceptionalism. Democratic icon Robert F. Kennedy and AlterNet and a bunch of others insist 5G cell service and affordable food made Americans biologically more susceptible to the coronavirus.

And they believe they know things the rest of us don't. Only 17 percent of Democrats believe CDC, NIH, FDA, and Health and Human Services efforts to control the spread of the coronavirus have involved public health experts. A whopping 83 percent believe that the 90 percent of government that are career employees, consisting of 80 percent Democrats, have been fired and Republican appointees are turning all of the knobs on health policy and want their voters to die?

It's political madness, but madness is fairly typical for both sides. Some Republicans still claim President Obama doesn't have a birth certificate, after all. 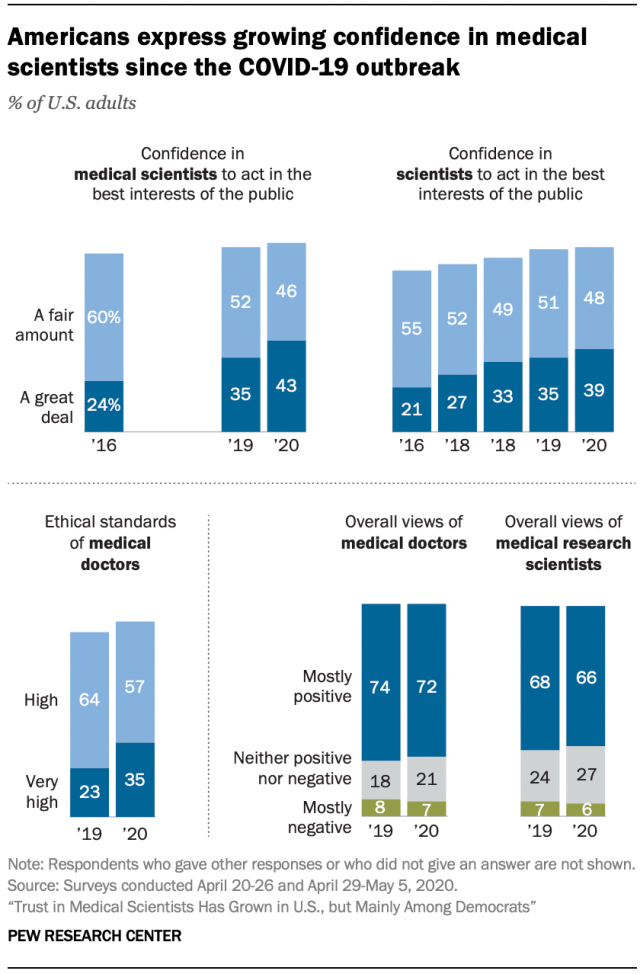 Yet there is positive news for Democratic trust in science. Before the outbreak, 87 percent of Americans overall had trust in medical science, dragged down by New York Times readers and their love of acupuncture and oxygenated herbs, but now it is up to 89 percent. And those with a great deal of confidence jumped 8 points in the last year. The difference is primarily in Democrats who have returned to the pro-science camp.

Two percent and eight percent might not sound like a lot, but when it is nearly 4 percent and 16 percent from one political party, it could change the world for the better.

This shift could be a big win for America

With Democrats coming back toward the side of science overall, we could see a new Golden Age for science in America.

Currently, America still runs the table in Nobel prizes, science output, and adult science literacy. But with 94% of science academia voting Democratic, while their tribe overwhelmingly distrusts applied science, science and science outreach are being held back, and that risks our future leadership. Even science communication risks being dominated by activists, because scientists don't want to be vilified on Twitter.

If this shift holds and Democrats begin to accept agriculture, energy, and medical science with the same fervor they accept climate science, it will be safe for scientists to speak up again. Science will be cool instead of corporate scientists being embarrassed to tell people what they do if they are Democrats.

That will inspire more of our best and brightest to go into science.

In an election year, everyone will try to make their political beliefs evidence-based. Here is what is true:

If you want to pretend that means the disease is harmless, so you don't need a mask, you can, the same way people told me at my software company in 1999 that the Y2K bug was a not a real thing, it was just a way for corporations to make money. When doomsday did not occur, they said they were right. On the other side, people argued that doomsday did not occur because we saw the problem and fixed it.

Given the rest of this article, you may think you can infer which political party was on which side in the Y2K debate - but you are probably wrong. Science acceptance shifts with cultural tides. Today, the political party that wanted more transparency and less "secret sauce" in EPA during Bush administration decision-making is now so opposed they got 600,000 comments lined up against it. Though NRDC led the charge to create more transparency in EPA back then, now the left claims it was instead a Big Tobacco tactic.

What changed? Political groups that benefited from secret sauce decision-making when their side was in charge now worry the regulations they got passed using secret statistical correlation won't survive if independent scientists have access to the data. The groups now lined up in opposition are a Who's Who of Democratic party organizations, from AAAS to Harvard. They all supported more transparency in the past.

One thing that coronavirus has not changed; science takes a back seat to politics, while both sides claim the evidence is on their side.

(1) California also rushed to believe weedkillers and bacon causes cancer despite any evidence, Berkeley and San Francisco are home to hundreds of groups in opposition to science because a friendly court has a community standard that matches their goals. The supplement market, which promotes itself as alternatives to science, did fantastic business in northeast and western states. They bought BPA-free cans of organic food and Non-GMO Project cat litter.

(2) Compare the result to New York, where NYC Mayor Bill de Blasio even told residents to rush to bars because he was going to be forced to close them - and their deaths at 7X California despite having half the population.

(3) The picture Rutgers included in their press release: 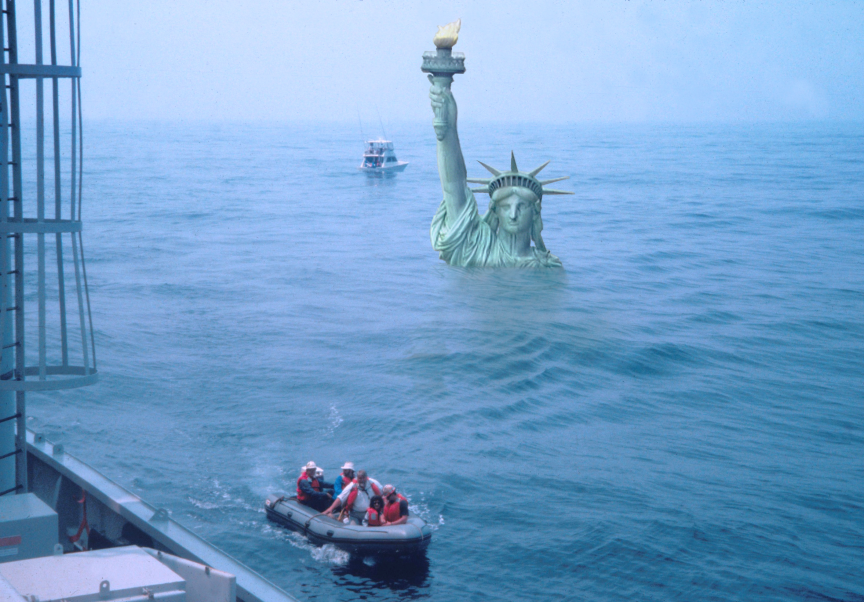