Hank Campbell
During the first year of the COVID-19 pandemic, 28 states experienced higher gun deaths, including suicides. New York, Minnesota, and Michigan saw numbers go up more than 100 percent, according to a recent paper. Only Alaska, which often leads the US, had significantly lower rates of gun deaths during that period.

The reasons must remain speculation but based on surveys about mental health it seems problems aggravated by any combination of government lockdowns and political infighting and cultural dogmatism caused a surge. Stress and lack of positive social interactions plus access to firearms can obviously be bad for someone with mental health issues. Which means more suicides and greater violence. The drug industry faces the same scrutiny as firearms so it seems that people with mental health issues, be they depression or hostility, have felt those magnified as COVID-19 worry approaches its third year.

Suicides tend to be final and accidents are rare but if more criminals are engaged in homicides, and that trend continues, it could burden a health system that is already dealing with co-morbidities leading to COVID-19 issues and then hospitalizations due to those complications. Is more violence really happening, though? The data instead say that actual gun violence peaked in 1993, when there were 18,253 murders using guns. Those had dropped 25 percent since then despite more people buying more guns than ever.(1)

That brings up a confounder in the paper, because it is talking about gun "violence." The authors say in some cases they were unable to determine in data from 6-18 months ago if the gun violence was actual homicide, which the public associates with violence, or accidental, which isn't associated with violence, or suicide, also not considered violence. Yet their source, Gun Violence Archive, claims they have a number of people making those determinations rapidly so there seems to be no reason this data couldn't be parsed out. Without knowing those, it is difficult to talk about gun violence if we should instead be talking about depression or other mental health issues.(2) The CDC says 60 percent of U.S. gun deaths are suicides. Among all countries that stat is basically flipped; over 60 percent of gun deaths are instead murder. Keeping guns stored safely, especially if people are on medication for depression or other psychiatric issues, is important.

March 2020 is the first month there were widespread government-imposed lockdowns and it is also the month when the authors say an alarming number of guns were purchased; dramatically higher versus March of 2019. When I looked at National Instant Criminal Background Check System (NICS) data, I saw that March of 2019 was down from 2018 - the first drop since 1998. So 2020 was up from a down year, which was not noted by the authors. Interestingly, it also looked like March is the month that leads in gun purchases each year. 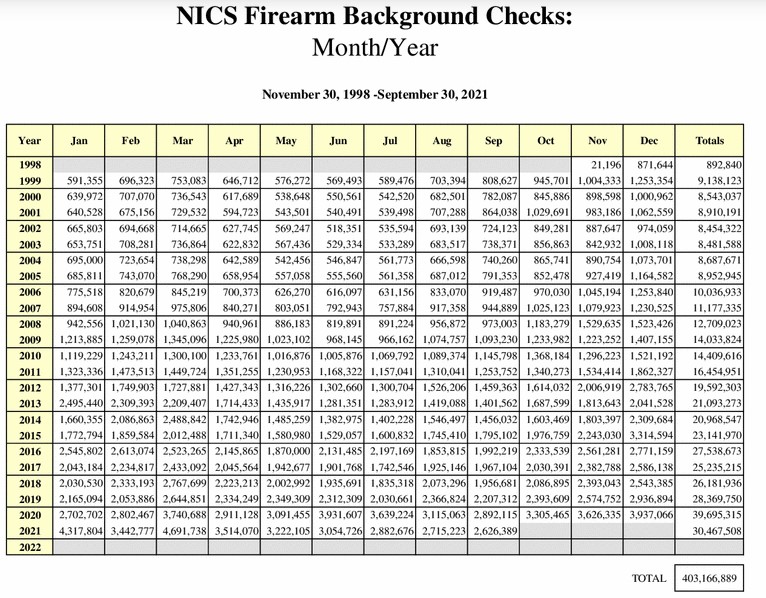 As confused as you probably are, I called Mark Oliva, Director Of Public Affairs at National Shooting Sports Foundation, which represents gun manufacturers and retailers and tracks sales, and he said while it was definitely the biggest month ever for background checks up to that point, most purchases happen in the fall when there are sales, hunting season, etc. Using background checks, which will include things like Concealed Carry Weapon (CCW) permits, and just one month means the data might include states that don't do background checks right away or even monthly.

The end of 2020 also saw a big increase in background checks, a reasonable proxy for purchases, but there was no corresponding surge in violence. There is an axiom that goes 'a Democrat in the White House is good for sales' - because they campaign on gun bans and restrictions more often than Republicans and with President Biden elected that may have spurred purchases. Will that mean more violence? Perhaps, but not so far. Like espresso machine sales, the background checks may have been purchases as part of a new pandemic hobby. More guns may have meant more bullets fired in ranges short term but they may now sit in a gun safe for years. Media attention to mass shootings and police actions may also be responsible for worries about personal safety. Those worries were certainly up. In May of 2020, Portland began three months of violent protests. In January of 2021, violent protesters stormed into Capitol Hill. Media attention coupled with other worries about safety have an impact.

Given media coverage of the pandemic last year, I wouldn't be surprised if it caused some panic buying among the public. But people who otherwise would not be gun owners did not suddenly go buy guns because they are going to commit violence. They might instead be worried about the rioting and looting the media discussed.(3)

If Halloween is any indication, people are no longer on red alert about the pandemic so mental health issues may also subside. Vaccines work but for some, masks will be around forever. "I think it's becoming slowly part of the furniture," UC Irvine epidemiologist Dr. Andrew Noymer told Joel Achenbach and Yasmeen Abutaleb at The Washington Post. "I don't want to wear scuba gear everywhere I go. This is just part of the human environment now."

For most, masks are going to be laying around like that fancy espresso machine, until the coffee device gets sold cheap. The odd thing about guns is that regulations make them difficult to sell, which means people who want them in the future will have to buy new - which will set off a new spike in background checks and thus correlation papers.

If you are experiencing chronic depression or dangerous thoughts, please call the National Suicide Prevention Lifeline at 1-800-273-8255.

(1) Murders are also not conveniently tied to access or purchases. California leads the US in employees directly related to gun sales and actual gun sales, by a wide margin, yet its homicide rate is negligible - 2,000 homicides in a state with a population of 40,000,000 people.

Rates don't always tell the most important story either. On gun violence maps, Montana looks like it is a national leader - when it was a tiny 244 gun deaths and only 42 murders.

(2) Japan, for example, bans guns but is still a world leader in suicides. They don't blame rope, the way guns are blamed as the reason suicides happen in the US.

(3) After Hurricane Katrina was over, actor Sean Penn was too afraid to even visit New Orleans without a shotgun in hand. He may have mounted M60 machine guns on his house due to COVID-19 coverage. 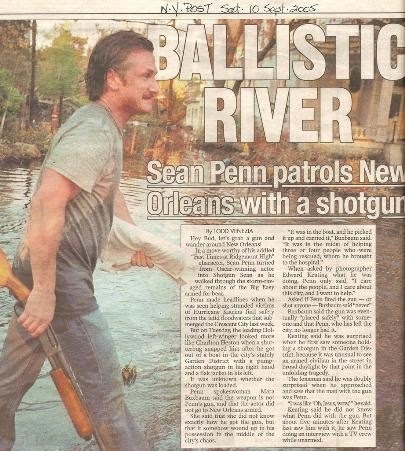