Hank Campbell
March is the time of year when even people who aren't college basketball fans get involved - because of March Madness pools, online or in the office.

Most, even experts will fail, because they do one thing wrong - they start in the beginning, which this year is March 17th, with dozens and dozens of teams, and work their way toward the NCAA Final. Yet that is the wrong way to go, according to a new study. Most people will be lured by the prospect of an upset along the way and are out of it by the Final Four.

The better strategy is to pick the Final Four right away, then work your way back. Then, once you have that in place, go for the Final. But don't just pick the top seeds, they get it wrong just like everyone else. The chances of all four top seeds actually reaching the Final Four are under 2 percent. Teams still have to play the games.
The new paper in Journal of Quantitative Analysis in Sports shows that if you are only in one pool. picking your final four teams in the beginning creates more clarity as you work your way back toward the earlier games. You are less likely to go crazy because you like the mascot name or the color of the uniforms if the future picks are set. Yes, upsets happen, but that is why they are called upsets, so being conservative helps, as always. 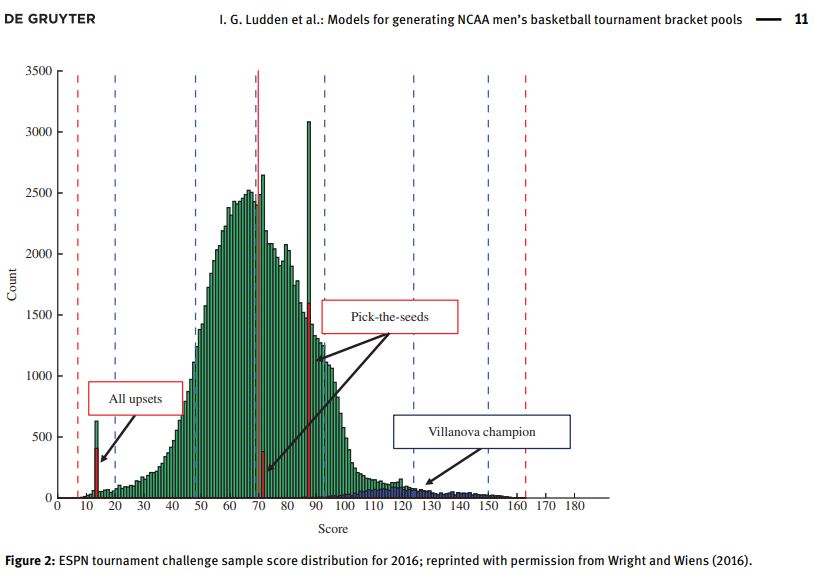 "For the 2016 through 2019 tournaments, our models produce many brackets that would have placed in the top 100 of the ESPN bracket challenge." says Ian Ludden, graduate student at the University of Illinois. "Our models that start by picking the Elite Eight or Final Four teams perform especially well, perhaps because they balance the two main risks: incorrect picks in the first two rounds, which may propagate through the tournament, and incorrect teams in the later rounds, where each game is worth more points."

A big qualifier; if successfully picking the past meant anything, economics would be science, but comparing simulated results to measured data is important. So use some judgment. Science can't keep your from getting coronavirus or something serious like the flu if you don't wash your hands and data can't help you win your office pool if you don't think about the finalists.

Super investor Warren Buffett famously promised $1 billion to anyone who could create a perfect run in their picks. The math is on his side. With 2^63 possible brackets there are over 9 quintillion (9 x 10^18) combinations, so forget the $1 billion, you only need to beat everyone else in your pool. The smart play is to select your Final Four teams first, and then build backward and forward from those games.

What if you don't even know how to pick a Final Four? The scholars would rather light a candle than curse your darkness so they have created a site with data analytics for you.

Obviously if you do win $1 billion using this article, our nonprofit science site is going to cash the check if you make a donation with some of your earnings.
Science 2.0
More Articles All Articles
About