It may not seem to make sense but most of the universe - mass - can really only account for about 6 percent of what is going on. The rest of it can be under just about any umbrella at this point. Some call it the God of the Gaps, scientists call the unknown mass Dark Matter.

What is it? No one knows, when it comes to the very large and the very small, physics does not have all the answers, but something has made the universe at least 100 billion light years in size even though it's only 13 billion years old. As you know, a light year is the distance light will travel in that time. Since nothing can go faster than the speed of light, it's long been time to think about what Nothing is.

That's dark matter. And whatever is propelling it can be called Dark Energy.

Unfortunately, that leaves a lot of room for speculation, and it can be confusing because scientists seeking media attention use the word "theory" in place of speculation. Between theory and speculation is inference, which is a valuable part of science, and that's where galaxy clusters come in.

We are in what the Romans saw as the via lactea and we now call the Milky Way galaxy. Obviously since we are inside it we are not really seeing it, we are seeing an edge-on view of it. The Milky Way is ~100,000 light years across and contains at least 100 billion stars.  We don't really know. Ancient people could see Orion and Sagittarius "arms" in our spiral galaxy and when I was a kid we knew we were "in" Orion. (1) That is why we can see so many objects in Orion well; we are looking at our own spiral arm. In the 1970s that began to be clarified thanks to telescopes with broader wavelengths. Now we know we are in a kind of spur between the two arms and not quite as insignificant as Carl Sagan made us feel in "Cosmos."

He would agree if he were here now. Science changes. That's a good thing.

Astronomers argue over everything in the sequence of universal events that led to earth today and me writing and you reading but compromise can always be reached by saying "it's all dark matter when you get right down to it." Dark Matter is the Smurf of astrophysics, it can be anything, but just like nothing must be Nothing, Dark Matter must be something, and science is getting better at trying to figure out what that something is.

One part of answer may be found in galaxy clusters, which are just what they sound like, thousands of Milky Way equivalents and hot gas all in a lump that just happens to be a billion light years wide. Galaxies have a core and so do galaxy clusters. The belief - let's not throw the word "theory" around if we don't want people to misuse it for economics, psychology and race studies - is that these clusters contain one massive Galaxy To Rule Them All in their core. A Brightest Cluster Galaxy. And it is not moving. 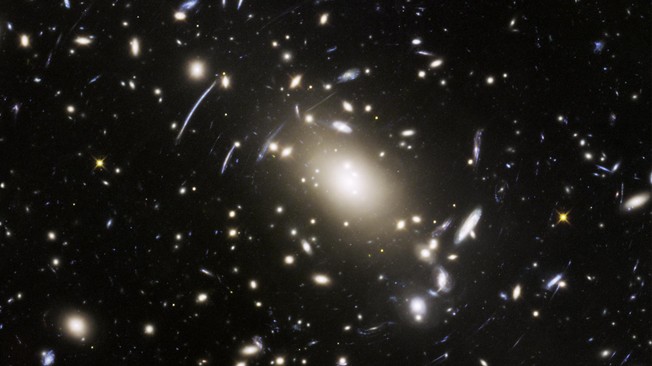 This brings us back to inference, how we often go from speculation to theory. Galaxy clusters are so massive that they warp the very spacetime around them and cause light to distort. So though we can't detect dark matter - if we could, it would be matter - scientists can map the wobbles in spacetime and infer where dark matter must be.  And where it must be is where this Brightest Cluster Galaxy is wobbling.

Those are numerical models, of course, and we have all heard the phrase about Garbage In Garbage Out. When you have lots of variables you can't solve an equation but you can converge on a good answer. And you do that by comparing your model to measured data. In this case the numerical models were in BAHAMAS (BAryons and HAloes of MAssive Systems) and the data were using the Hubble Space Telescope. And...it didn't work.

And yet it is happening, which means we don't even know what we don't know about dark matter. Science marches on.

(1) Which is why by about 6th grade I stopped believing there was any hope for my horoscope. I learned we were moving at 67,000 miles per hour so by the time someone had smacked my butt and cleaned me off after I was born, my position had changed so much I went from Virgo to Leo before my mother ever held me. And assuming we do math better than Babylonians in 450 BC I was...well, I don't know, you'd be worried I am in the wrong job if I did know.

Hank Campbell is the President of the American Council on Science and Health, a pro-science consumer advocacy group founded in 1978, and the founder of Science 2.0. He received no funding from Big Modified Newtonian Dynamics or anyone else to write this article.