Hank Campbell
If you believe solar power is ready for mass usage, you are likely an activist, in the industry, or one of the customers who really believes they are selling electricity back to the utility at the same price they are paying when they need it and it isn't being paid for by people in the apartments that we get told are better for the environment than single-family homes.

Without mandates and subsidies, plus fees tacked onto every non-solar-using customer, the industry would go back to the niche it was prior to 2010. Since 2010, the share of conventional energy needed has not moved while the world spent trillions underwriting alternatives.(1)

What may work is something I have discussed many times in the past - solar power in space. It's not a new idea but has never had a charismatic leader who can get political funding like Elon Musk. Here on earth solar power remains a gimmick because our atmosphere exists to protect us from the sun. Already inefficient panels then decline in output unless they are cleaned once a week and replace at high cost often. Solar power in space has 1,000 percent better energy capture and no cleaning and no replacement unless random disaster happens. 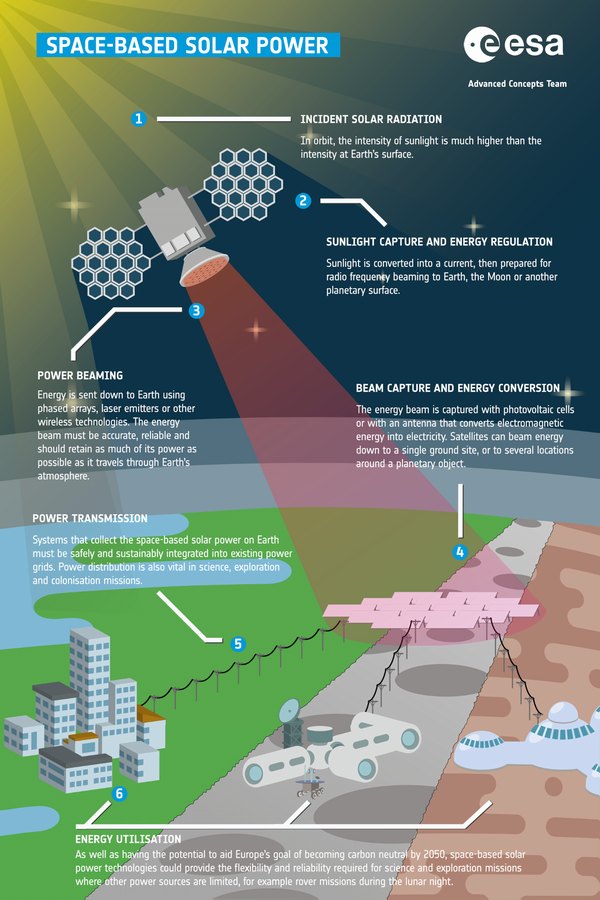 The US scrapped a giant chunk of NASA technology during the Obama years and after 19 years of delays finally launched a replacement for the Hubble. But it will only last 10 years so if they want a replacement for that they need to have started in 2013, which they did not do because of the budget overruns and delays of the James Webb Space Telescope so solar power in space may need an Elon Musk-type in the private sector while NASA and the CDC and nearly every other government organization that claims to be about science continues to trip over their own shoelaces.

Or, like the Large Hadron Collider took experimental physics over from the US, the European Space Agency may push America to the back seat in energy as well. They recently invited four scholars to draft a co-funded research proposal for how they'd create for wireless transmission of solar energy. Five groups are getting funded to create proof of concept.

Will any of this pan out? The obstacles are large but primarily technical. The cost will be tremendous but the example I often use is the fax machine. The first one cost a fortune and could not even fax anyone else. You could throw in a CD-burner or a telephone instead but you get the idea.

Fusion power may be still too hard but I way to gather the result of fusion and beam it to earth or Mars or anywhere else is closer than people may realize.

(1) To really work would mean adding new power lines equal in mileage to every paved road in America. There would need to be a revolution in battery storage that has never happened and will never happen as long as governments subsidize the old technology - one Tesla owner blew up his car with dynamite when he found out the cost to replace the batteries was $22,000 - and the environmental playbook has not changed. They lobby for alternatives - ethanol, natural gas, hydroelectric power - and once those actually go into common use they sue governments and companies over them.

They have already started suing over solar power, but right now we can only imagine the lawsuits if America tries to devastate enough wilderness to put up enough solar panels to be meaningful and then wants to add 22,000 miles of new power lines.