Hank Campbell
You never want to introduce a spoiler into an article so I am warning you now, before you read any farther, that a spoiler is inevitable if I am going to talk about the secret role I played in the new Disney MCU film "Doctor Strange in the Multiverse of Madness."

If you haven't seen it because you thought the first was rather generic, I am with you but you should go. It is completely bananas, in the way a Doctor Strange film should be. It has Sam Raimi written all over it and that makes it a blast.

Since you have been warned about spoilers, I can tell you when a scientist in another part of the multiverse, their version of Stephen's love interest in the first film, mentions she works at the Baxter Foundation, I grabbed my wife's arm. Could it be the Fantastic Four were going to show up? And, if so, could it mean my dream version of Reed Richards was part of the team?

I am a longtime "Fantastic Four" fan. I own the first 300, and #1, the comic that basically created Marvel, is obviously kept in a fireproof safe now. Like all comics, it had ups and downs so in later years I only bought specific "runs" - story lines by artists and writers that are great - because with gimmick reboots it can be pointless to care when the whole story could be wiped out in a year.

I liked that in some runs Reed Richards, arguably the smartest guy anywhere, gradually edged into totalitarianism the way a giant among ants who refuse to do the right thing might first guide them, and then force them to save time. Most of the time he was trying to manage the chaos, knowing he could never stop it. A little tired. Fatigued.

That's how I came to be involved in the new "Doctor Strange" film, without ever putting on a costume.

A few years ago I watched a movie called "13 Hours: The Secret Soldiers of Benghazi", directed by Michael Bay, about a 2012 terrorist attack on an American diplomatic compound in Libya, where the people who saved the day were oft-reviled military contractors. Starring in it was John Krasinski, famous for the comedy series "The Office" and his performance as a guy who knows he has to do the right thing, despite the risks and knowing it won't matter at all in the bigger picture, was terrific.

A "Fantastic Four" effort had been made for a third time a few years before '13 Hours' and I didn't think much of it. I liked some of the casting in earlier versions - Sue Storm in the early 1990s Roger Corman version (never released, I got it as a bootleg) was spot on, and Chris Evans as the Human Torch in the first Fox version was so good I didn't think he could be Captain America - but the movies were not anything to watch more than once. Yet seeing Krasinski in a beard, older now, a little jaded in his '13 Hours' role, a guy who just wants to make money to take care of his family but his brain won't shut off, I felt like that was who Reed Richards should be now that Disney had bought back the rights and could do a great MCU film.

So I wasted some time on Twitter. My tweets self-destruct after two weeks because I write about science, and science is inherently political, and everyone wants to cancel everyone, and I have written plenty of pretty innocuous things - like that your ability to observe stars is not impacted by your gender - that have led to death threats. No, really, that one got me people asking if I was willing to die for my belief that gender makes no difference in your ability to be an astronomer. From progressive women, not male right-wing loons.

So I wrote a tweet(1) stating my belief that after seeing John Krasinski in '13 Hours', I felt like he would nail the role of an older Reed Richards, the guy who will exist after the youthful optimism of belief that information and data can fix the world is long gone. And I included a picture of him from '13 Hours' but like Reed, except a better version than the one I made, where his head was just pasted onto Reed Richards. 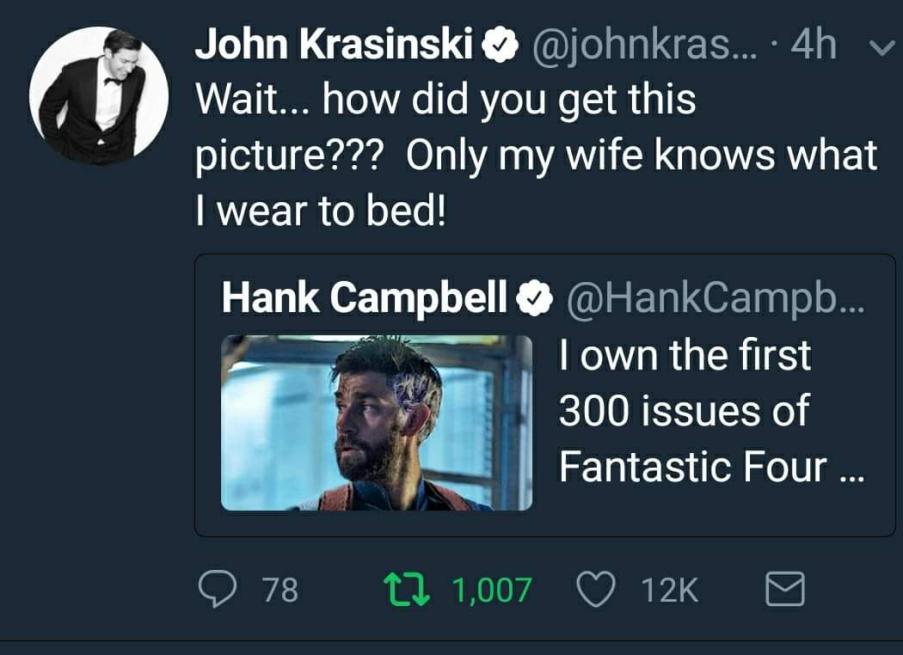 A tweet that self-destructs would be the end of the story, except he saw it and made a joke, and then a whole lot of people agreed with me. Then articles got written about this "fancasting" and he got asked about it in interviews. 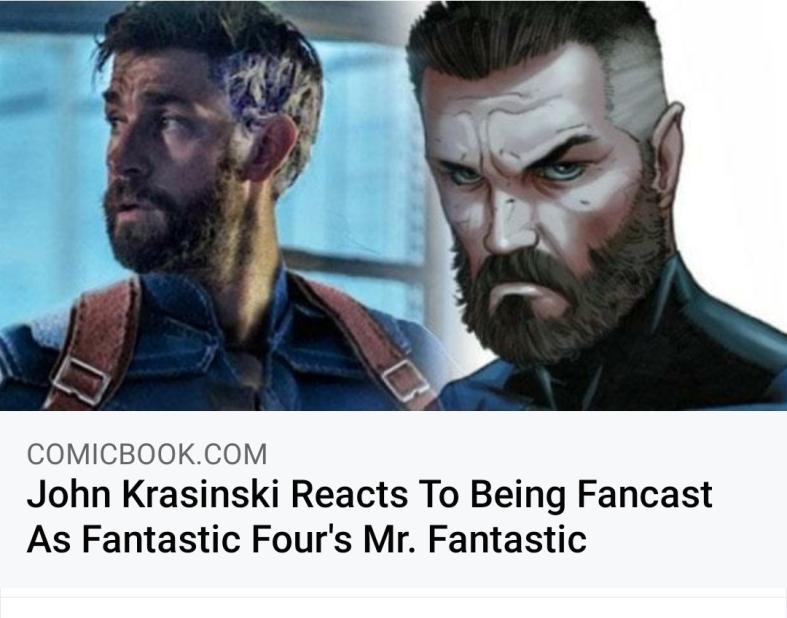 Fast forward back to this past Saturday and *spoiler alert* we got just that in the new Doctor Strange movie. Leave it to Marvel to slip some outstanding fan service in when they can! And he looked just like I wanted in that blue suit.

My wife said later she was surprised I did not jump up and squeal and I told her I was trying to keep it together because it was a crowded theater - and men in their 50s shouldn't squeal during movies. I told my teenage sons about that harbinger tweet on the walk back to the car and they were non-plussed by all of it. My family doesn't read my stuff any more than Krasinski's watches his. They just liked the movie. I had one son who was working on Saturday and could not go so we are going with him again tomorrow.

Since it was a multiverse movie, I can't get too excited that he'll anchor a trilogy as Reed, but my wife said if that does happen we need to ask Krasinski for tickets to the premiere. A big request for a tweet but okay.

"You'd go with me to a Fantastic Four movie in LA?" I asked her.

"I want to hang out with Emily," she replied.

Wives. Keeping us humble since forever. You can bet no matter what is happening in the Baxter Building Sue is reminding Reed he said he'd take out the trash.

(1) "I own the first 300 issues of Fantastic Four but only bought them in runs after that (like Walt Simonson&Jon Hickman) and in decades I have never been happy with any FF casting except Chris Evans as Human Torch. "But after 13 Hours, I know @johnkrasinski would nail it as Reed."

The original tweet self-destructed long ago but somewhere in the multiverse it still exists. I only have a graphic at all because I thought it was really nice he replied and screencapped that and put it on Facebook.
Science 2.0
More Articles All Articles
About