Hank Campbell
The wage gap between genders has always had some cultural traction but there were also always odd pockets where it was worse - including what you wouldn't have expected. Environmental groups had far more women but the wage gap between what they paid men and women was alarming compared to engineering, where there were fewer women as a total percentage but no meaningful pay disparity.

A new paper finds it is still the case that the exceptions are the norm, which means they may not be exceptions at all. Occupations dominated by men pay women more, adding weight to the belief that women are not being blocked out of occupations like physics any more than men are being blocked out of occupations like psychology. Some fields just pay everyone better instead of being a bell curve.

Culture warriors have always had rationalizations for such confounders and they sound like science. They go by names like the Theory of Gendered Organizations and the Theory of Tokenism but they are theories only by using the word to create proper names. The new work wanted to put those to the test. Using a cohort of survey results from 7,537 adults, average age 51, in The German National Educational Panel Study, which included pay, the authors found that men did not benefit from working in field where women dominated while women benefited in pay by working in fields where there were more men.

The result lends weight to both the belief that genders benefit if they are the majority of employees but also by standing out in a gender-atypical occupation.  When something can mean everything it is hard to know if it means anything at all. 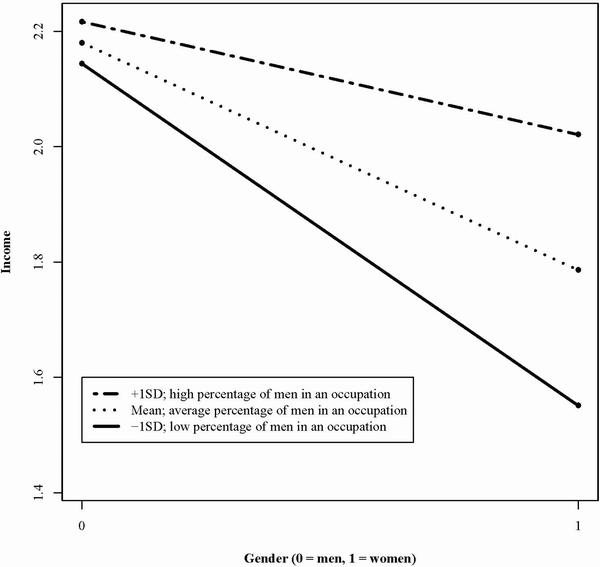 Cross-level-interaction of gender and gender ratio on income with gender ratio as moderator. Simple slopes for men and women in occupations with different gender ratios indicating the relative frequency of men in an occupation. Predicted values in income are in Euro (1 = 1000 Euro) and are based on setting covariates to zero (i.e., men and women of average age, average reasoning skills, average years of education, no leadership position and part-time employment). Values of gender ratio are grand-mean-centered. The figure was created in R. https://doi.org/10.1371/journal.pone.0270343.g001

So the pay gap is still real, but it happens to both genders, and more so to men.

Saying it is sexism is the reason if women paid less or are paid more is like saying football teams discriminate based on race. They are either greedy billionaires who only care about profits and not players or they don't care about winning and tell General Managers to make roster choices based on skin color. It cannot be both, just like it can't be both in salaries.

Hiring often comes down to factors that have nothing to do with an "ism" of any kind. Sometimes you hire the best person available right now, but just because someone better becomes available six months later you aren't going to fire people who have done nothing wrong. Sometimes people want too much money, because someone at some other company in the field is making that much, and companies hire the person they can afford. Sometimes they just don't like you.

Survey results and correlation are a lot like astrology; if you want to find something to like or dislike, you can. If you are in a field where you are a minority and make the same, you can even claim you had to be better than everyone else to get equality. If you make less, you can say it is due to sexism.

Engineers and college professors both get high salaries but the latter means navigating all kinds of cultural agendas and if you don't check off more boxes of those boxes than someone else, you may not get hired. Only handicapped people and Native Americans can sympathize with how hard it is for a Republican to get a university job, for example. As these results show yet again, in engineering you just need to know your stuff and be willing to show up.