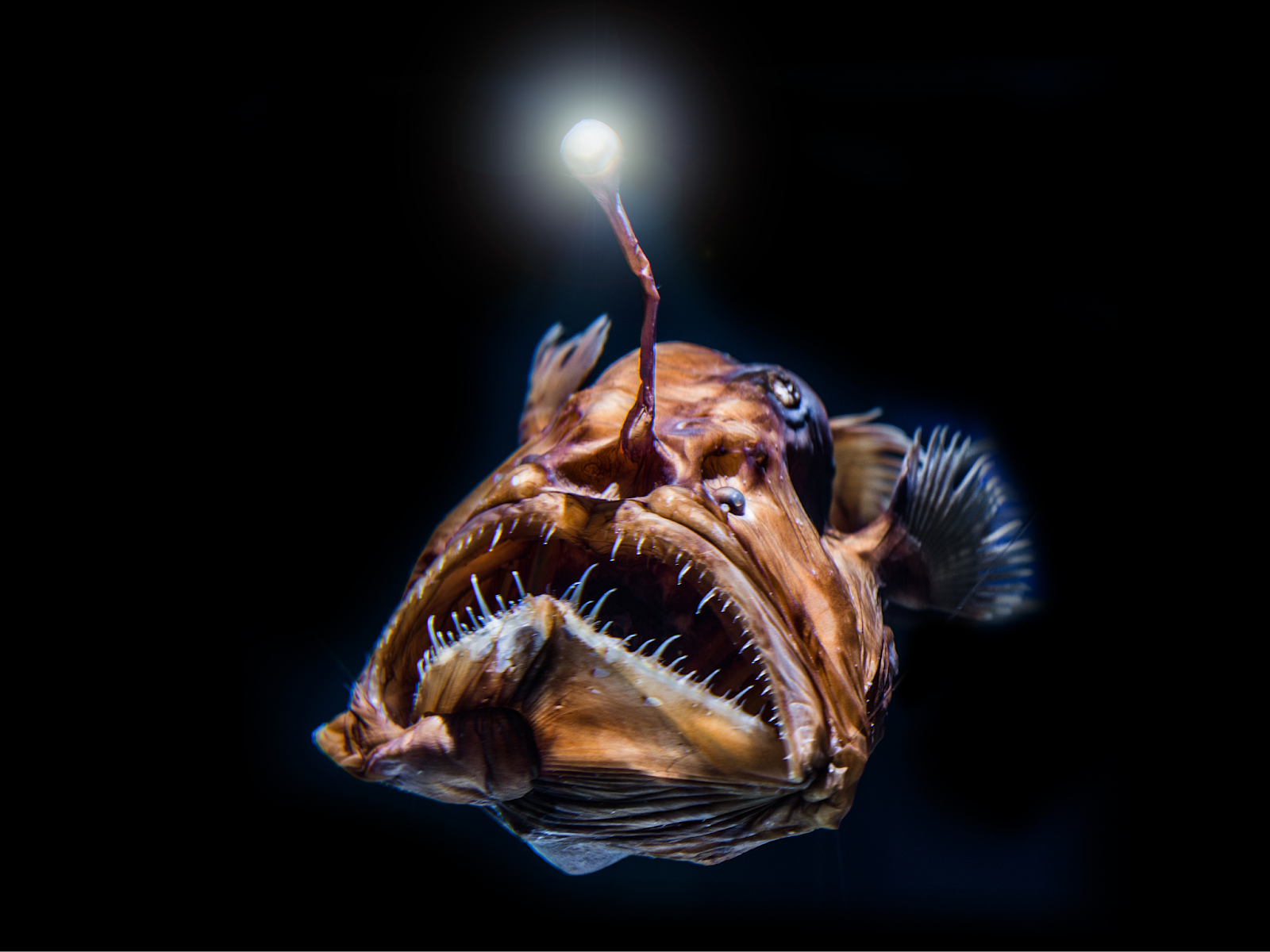 The festive lassie you see here is an Anglerfish. They always look to be celebrating a birthday of some kind, albeit solo. This party is happening deep in our oceans right now. The wee candle you see on her forehead is a photophore, a tiny bit of luminous dorsal spine. In anglerfish' world, it's highly alluring. The photophore is an adaptation used to attract prey and mates alike.

Deep in the murky depths of the Atlantic and Antarctic oceans, hopeful female anglerfish light up their sexy lures. When a male latches onto this tasty bit of flesh, he fuses himself totally. He might be one of several potential mates. She's not picky, just hungry. Lure. Feed. Mate. Repeat.

A friend asked if anglerfish mate for life. Well, yes the males.... yes, indeed they do.

Mating is a tough business down in the depths. Her body absorbs his over time until all that's left are his testes. While unusual, it is only one of many weird and wacky ways our fishy friends communicate, entice, hunt and creatively survive and thrive.

The evolution of fish began about 530 million years ago with the first fish lineages belonged to the Agnatha, a superclass of jawless fish. We still see them in our waters as cyclostomes but have lost the conodonts and ostracoderms to the annals of time. Like all vertebrates, fish have bilateral symmetry; when divided down the middle or central axis, each half is the same. Organisms with bilateral symmetry are generally more agile, making finding a mate, hunting or avoiding being hunted a whole lot easier.

When we envision fish, we generally picture large eyes, gills, a well-developed mouth. The earliest animals that we classify as fish appeared as soft-bodied chordates who lacked a true spine. While they were spineless, they did have notochords, a cartilaginous skeletal rod that gave them more dexterity than the cold-blooded invertebrates who shared those ancient seas and evolved without a backbone. Fish would continue to evolve throughout the Paleozoic, diversifying into a wide range of forms. Several forms of Paleozoic fish developed external armour that protected them from predators. The first fish with jaws appeared in the Silurian period, after which many species, including sharks, became formidable marine predators rather than just the prey of arthropods.

When we speak of early vertebrates, we're often talking about fishes. Fish is a term we use a lot in our everyday lives but taxonomically it is not all that useful. When we say, 'fish' we generally mean an ectothermic, aquatic vertebrate with gills and fins.

Fortunately, many of our fishy friends have ended up in the fossil record. We may see some of the soft bits from time to time, as in the lovely fossil fish found in concretion in Brazil, but we often see fish skeletons. Vertebrates with hard skeletons had a much better chance of being preserved. In British Columbia, we have lovely two-dimensional Eocene fossil fish well-represented from the Allenby of Princeton and the McAbee Fossil Beds. We have the Tiktaalik roseae, a large freshwater fish, from 375 million-year-old Devonian deposits on Ellesmere Island in Canada's Arctic. Tiktaalik is a wonderfully bizarre creature with a flat, almost reptilian head but also fins, scales and gills. We have other wonders from this time. There are also spectacular antiarch placoderms, Bothriolepsis, found in the Upper Devonian shales of Miguasha in Quebec.

These two supercontinents and others that were also present were partially covered by shallow equatorial seas and the continents themselves were barren and rocky. Land plants didn't evolve until later in the Silurian Period. In these shallow equatorial seas, a large diverse and widespread group of armoured, jawless fishes evolved: the Pteraspidomorphi. The first of our three groups of ostracoderms. The Pteraspidomorphi are divided into three major groups: the Astraspida, Arandaspida and the Heterostraci.

The oldest and most primitive pteraspidomorphi were the Astraspida and the Arandaspida. You'll notice that all three of these taxon names contain 'aspid', which means shield. This is because these early fishes and many of the Pteraspidomorphi possessed large plates of dermal bone at the anterior end of their bodies. This dermal armour was very common in early vertebrates, but it was lost in their descendants. Arandaspida is represented by two well-known genera: Sacabampaspis, from South America and Arandaspis from Australia. Arandaspis have large, simple, dorsal and ventral head shields. Their bodies were fusiform, which means they were shaped sort of like a spindle, fat in the middle and tapering at both ends. Picture a sausage that is a bit wider near the centre with a crisp outer shell.
Fossil Huntress
More Articles All Articles
About