News reports have thundered that we have detected dark energy, others have reported that we may have detected dark energy. The difference being that the reporters either read the title or they read the abstract which qualified the title. Odds are most reporters did not read the body as even a working physicist would have to study this paper for quite a while to understand all it says. Something which I may do since the work “Direct detection of dark energy: The XENON1T excess and future prospects” CITATION Vag21 \l 1033  (Vagnozzi, et al. 2021) published in Physical Review D is a particularly good work. In fact, I would say it is a good example of the type of theory I proposed in 2014 and gave talks about at subsequent APS conferences, in which the fundamental reason we do not detect dark matter particles in experiments like XENON1T is that the particles interact with gravity in such a way in the presence of strong gravity that they annihilate to gravitons.  The model they tested proposes that the dark matter particles would annihilate inside dense objects.  There are well known models that they test as well.

IF they have done what they say they have then they will have truly finally opened the physics community to the ideas that we are not finding dark matter particles in earth-based experiments because they are not what we thought they were. Indeed, it would be a win for alternative gravity models which include scalar fields.

That said I want to point out two things for the public and the media.

In the abstract of the paper, they state that they have excluded the null hypothesis by 2.0 sigma. In simple terms this means they are 95% certain the effect is real and not random noise.

In the body of the paper, and this is more technical, I am concerned by the Lagrangian they tested 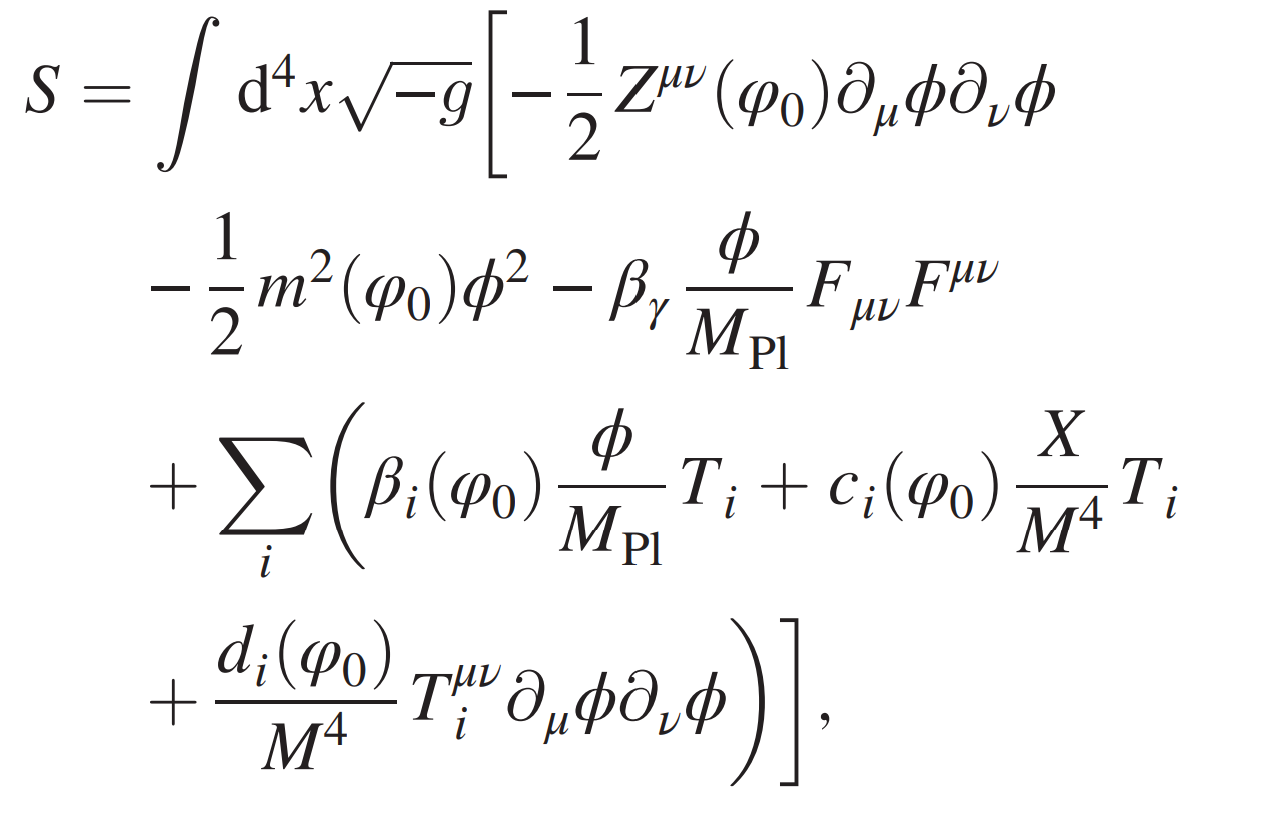 In simple terms I do not see, explicitly, the Ricci curvature R. An action that has R in it will give rise to dynamic gravitational effects.  According to Luca Visinelli "Hello, thanks for covering our article! The R term is included in the action of the chamelons, see Eq.1 in 0408415.pdf (arxiv.org). We just did not write this term explicitly as we focus on the excitations of the field"

An action S that includes the Ricci curvature R and only R gives rise to all General Relativity, Einstein’s theory of gravity.  This is known as the Einstein Hilbert Action. It is completely standard not to include this for many good strong reasons. In a static or even a steady state vacuum it is zero. The thing is, nothing important happens in such a vacuum. Such solutions to Einstein’s field equations are idealizations which break down even in the presence of gravitational waves (as the waves themselves have a curvature). We now know that we live on a background of classical gravitational waves without even considering any quantum scale fluctuations, or how the effect they detected would behave close to the big bang, or a Black hole merger.

Including R might change the calculation in important ways that might not be obvious the math is worked out from action to field equations and the solutions to those field equations. Since any model that has dark energy must also work when gravity is extraordinarily strong, and in which the Ricci curvature will not be zero. The paper rightly alludes to this sort of analysis being for a future work.

In short, the work is good but the reporting on it is a little too enthusiastic. There are many confounding variables, but to a satisfactory level of certainty we have not been fooled by a random fluctuation. Personally, I find it affirming that a concept that I came upon, not knowing of any other similar work, that dark matter may decay or degrade in a way that makes it hard to find in Earthbound experiments is something that is not considered wild speculation anymore.

If you liked this article please consider subscribing to my SubStack.  I regularly publish 1-2 articles per week giving my views on science, education, and society.  News items like this will always appear here at science 2.0 first.  Please also check out the other great writers here at Science 2.0.