Waves of geometry in four-dimensional space-time, that is what gravitational waves are.  The very definition of distance between points in space-time changes as these waves pass.   The objects in the space do not move but space itself changes momentarily.  The scale at which these changes can be measured right now are on the order of a few dozen widths of a proton.  Smaller than the average distance between the electron and proton in a hydrogen atom.   Yet, with laser light shining through interferometers, we can measure these changes.  From these we can learn about the fundamental nature of the universe.  Not by studying the matter and energy content of it but by studying the space that connects it all.

Most who graduated high school were introduced, at least once, to the Pythagorean theorem.  The square of the hypotenuse of a right triangle is equal to the sum of the squares of the other two sides. Sometimes this formula was presented as the “distance formula”.  It gives the distance between points on a flat two-dimensional surface.    This is geometry as most of us know it.  However, this geometry fails if the surface is not flat.  For example, on a flat surface the sum of the angles of a right triangle is equal to pi radians (or 180 degrees).  On a curved surface, such as a sphere, the sum of the angles will instead be greater than 180 degrees. 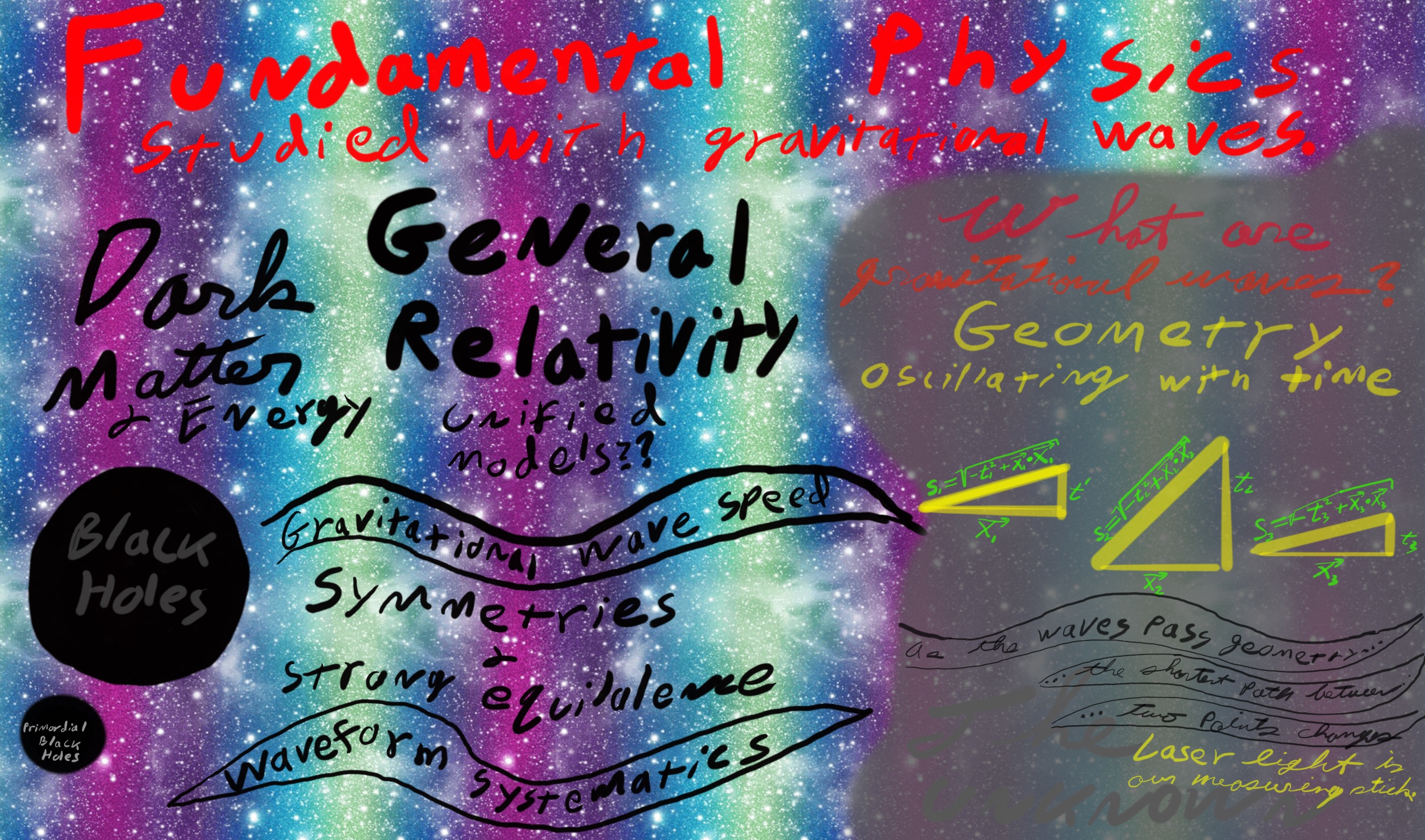 In four-dimensional space time things can get even stranger.  Let it suffice to say knowledge of plain Euclidian geometry is at best an approximation to reality.  However, the lessons it teaches are necessary for understanding reality.

To see what is mean by gravitational waves as waves of geometry try this exercise.  As a model to think about suppose instead of doing your geometry on a sheet of paper you did it on a sheet of rubber.    A rubber glove would be a good.

Draw a right triangle on it.

Stretch it then relax it.

As you stretch the glove out notice how the relationships between the lines and angles change.

The space of the glove gets longer in one direction but compresses in the other.

Of course, this is only an approximation, but it is a good way to think about what happens with gravitational waves.

Since these waves do not need to penetrate matter but instead change the geometry that the matter is in they can probe regions of the universe previously invisible to us.  Those we have detected so far have originated from the mergers of black holes, from the collisions of neutron stars with eachother and with black holes.  These waves carry information to us possibly from as far back as the very moment of the big bang.

As a small part of the LISA Consortium mysef  and hundreds of other scientist and engineers will seek to answer fundamental questions about the workings of the universe.  This work is complicated and quite difficult to do full justice to without a course in general relativity and quantum field theory.  Suffice it to say scientist have always learned fundamental truths about the universe when a new form of observation became available.  The telescope unlocked the stars and planets, the microscope unlocked cells and microbes, the particle collider unlocked atoms, LIGO, VIRGO and LISA will unlock the fundamental nature of the entire universe.   For a detailed, well written, well sourced and technical understanding of these things please see the following publication on the Cornell arXiv.