Sex Reassignment Surgery in Transgender women is a misunderstood, maligned, and mysterious procedure.  Thursday I  will have this procedure sometimes called  Gender Confirmation Surgery.  I will blog about it, tweet about it, and Vlog about it on Youtube.  This will be a look at what this procedure is really like.  UPDATED with a link to my RealSelf review which will include images of the surgical result at bottom of page. Gender Confirmation Surgery as it is now called in very PC circles is one of the mysterious procedures of transgender life.  Do they chop it off?  Of course not! (1) This is surgery, there is careful cutting, and stitching, and suturing in a place where no one would ever choose without a very compelling reason.  Indeed I have had to undergo painful hair removal in the personal region, an older requirement I took out of an overabundance of caution.

That compelling reason is gender dysphoria, a feeling of incongruence between one’s brain, body, and a tension between the cultural role people with your body are expected to fill.  It has at least those three dimensions.  I’ll discuss a possible underlying cause later.  Only gender dysphoria justifies this operation and it should only be done after one has gone through the process laid out in the World Professional Association for Transgender Health’s Standards of care.   That said, it is one thing to read a sterile report about it… or see it from the outside point of view.  This blog will contain my real reaction to it over the course of my week in the hospital and a bit afterwards.

What will it be like for me one academic scientist of color in Chicago IL in 2018.  If it is good for me or bad for me remember your experience can vary.

Watch the space below for my reactions and comments on how things are going.  They will come by Twitter, on which you should follow me.  There will be tweets, pictures, and maybe Youtube videos linked on the tweets.

This is my story up to now presented with photos. Click to see the rest of it. 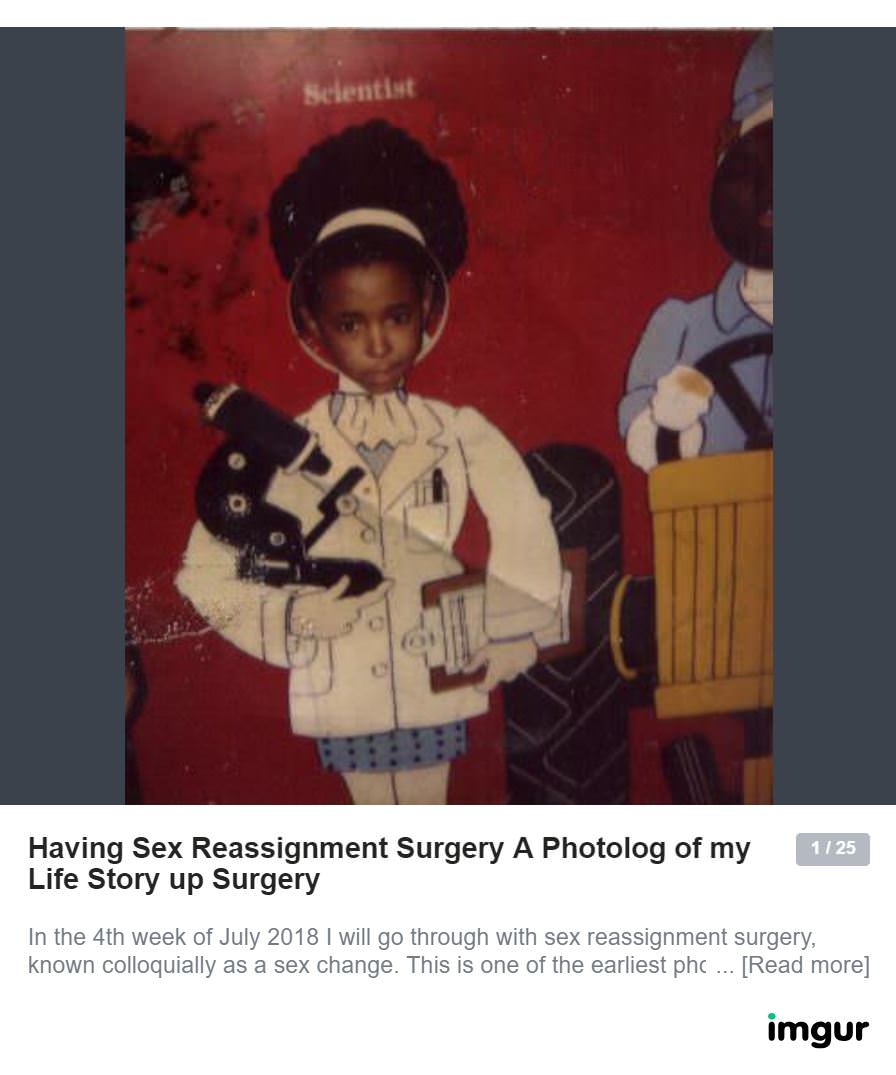 If Imgur.com 's embed code starts working correctly it will appear here. Apparently they can't give me an idea of what the issue is unless they see their code block on the live site. So ok...

What TS/TG GRS is llike ...it should appear here but clearly right now it does not. So click the image above to see my photolog for now.

Other social media embeds may appear below here.

On stories like this someone always wants to go on about hormones, and chromosomes and this and that.  I don’t want this to be a blog on etiology of transsexuality.  I wrote plenty of those.  I’ll just leave this here.

The long and short of things is that male to female trans girls and women have brains that are distinctly different from boys and men. (2,3,4)  These same studies also often show that within the male to female trans group those with different sexual orientations have different brains.  This is an established and replicated fact not often mentioned in part because it supports some controversial ideas (5). Though this by no means proves that theory(6).

None of which should really be a surprise and ultimately does not matter.  Our brain is the reason we do anything we do.    We think and feel with our brains.  Our brains are sexually dimorphic in key ways while being largely similar and of equal intelligence.   Sex, sexual orientation and gender are about those deep instinctual things.  Like every other part of the body that is sexually dimorphic this part is subject to forming in a way that is not congruent with the rest of the body.  Unlike every other such part only the brain is the seat of our personality, our mind, and our identity.     That is the reason trans gender people exist and have existed across cultures and across time.  It comes as naturally to us as being a man or a woman comes to those who are cisgender.

(Cis and Trans are not "made up" as I've seen it said. They are old Latin as in Cisalpine Gaul and Transalpine Gaul.)

How our brains get this way is a matter of debate and probably has multiple different causes from genes to environmental factors.

Many conservative trans women will say that SRS or GCS is not about sex even a little.   Let’s keep it real. It is surgery on your sexual area.  Come on 😖. Sex isn’t ALL of it either but sex matters.  Don’t set social pressures force you into this.  There is no requirement of any transgender person to have this operation. Anyone who read this needs to be real with themselves and consider their sexuality when they decide to have this operation because it will change things it has to.   It is going to be a world of pain… if you are lucky since no pain would mean destroyed nerve endings.

Even shorter, of course, people with different gender identities have slightly different brains.  Of course, people with different sexual orientations have slightly different brains.   If it wasn’t for those slight differences, there would be no behavioral differences. When it comes to human rights what matters is that all of these people are people and that our rights should not infringe on the rights of others or vice versa. Simple as that.

Knowing all the above.  Thinking all the above I go into this with my eyes open and by brain informed in the extreme.  This is not uncommon.  The last myth I want to dispel is the idea that transwomen think we are litterally XX women somehow.  That is not the claim unless one is insane.   It has always been about our brain. We have a sense of this even when we are children.

(Let me apologies in advance since just what terms are PC for this evolves quickly in the US. I’d bet that in 10 years any words I use now will be considered not PC).

2.)    Transgender brains more closely resemble brains of the sex they align with, rather than what they were born with June 3, 2018  by MIKE COLAGROSSI .

3.)     Transgender peoples brain are wired like those of gender they identify with by Kashira Gander

I haven't forgotten the issue I wrote about earlier with Crunchyroll.com using translations that are needlessly insulting towards trans and gender non conforming persons. They have communicated with me and say they will have a comment or statement on the issue.

(UPDATE here is a link to my review on Realself.com which has clinical photos and will be updated once in a while on this.)
Quantum Gravity
More Articles All Articles
About