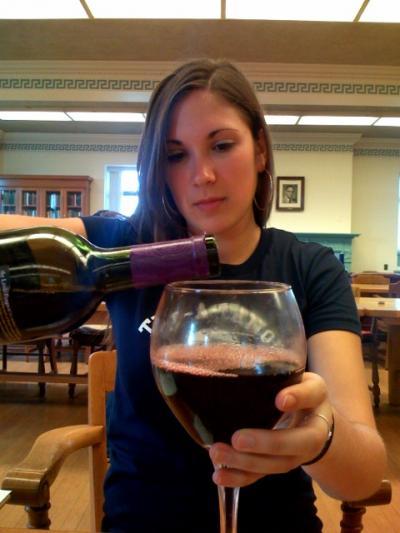 By Marsha Lewis, Inside Science – Each year, about 32 billion bottles of wine are bought and sold around the world.  Each bottle contains about two and a half pounds of grapes, and to transform those grapes into a beverage with the perfect aroma, color, and taste, winemakers carefully monitor the complex chemistry bubbling away in wineries’ fermentation tanks.

“I would say the trickiest part of making wine is getting the flavors right,” said Linda Bisson, a yeast geneticist at the University of California, Davis.

The single most important step to making a good wine is fermentation, which is what gives wine its particular taste and alcohol content. Winemakers add yeast—a single-celled fungus—to grape juice, and the yeast digests the sugar glucose, making alcohol and carbon dioxide.

The yeasts are so good at gobbling up the glucose, in fact, that they usually crowd out other microbes in the juice. What’s more, by adding alcohol to the mix, yeasts make the juice less hospitable for its microbial neighbors. “Yeasts are these incredible microbial juggernauts," said Gordon Walker, a biochemistry graduate student at the University of California, Davis. "They suck all the nutrients, they suck up all the oxygen, they incredibly dominate in fermentations and on top of that, they make alcohol, so they’re knocking back the growth of everybody.”

If all goes well, the yeasts rapidly multiply, crowding out other microbes and allowing fermentation to complete in two to three weeks. But sometimes, the yeasts get stuck and don’t fully ferment—a problem that has plagued the wine industry for centuries. When the yeasts stop working, the wine stays too sweet, giving undesirable bacteria plenty of food.   As a result, the yeast gives off an acrid sulfur smell like rotten eggs, clams and bad vegetables.

But now for the first time, Bisson and her team have discovered what triggers "stuck" fermentation.

They’ve learned that bacteria in the wine can trick neighboring yeast into making abnormally formed proteins called prions. These prions, which reproduce inside of the cell, tell the yeast to to slow down or stop converting glucose into alcohol—giving the bacteria space to flourish.

“We think what the yeast are doing is that they’re taking the signal from the bacteria, and slowing their metabolism down slightly...and slowing their fermentation processes a little bit," said Walker.

Now that they know what’s causing it, researchers are working to create yeast strains that will ignore the bacteria, not create the protein, and keep on working.

“The industry just wants the problem solved. They don’t want to have bad sectors of their vineyards that give them lower quality wines,” said Bisson.

Now we can all drink to that!

Marsha Lewis is a freelance producer based in California. She has won 11 National Telly Awards and nine Regional Emmy Awards for her work in local and national syndicated news. Reprinted with permission from Inside Science, an editorially independent news product of the American Institute of Physics, a nonprofit organization dedicated to advancing, promoting and serving the physical sciences. Image credit: Cornell