News Staff
A cave inside some remote mountains of Armenia contain what is being called the oldest winery yet discovered, dating back to around 4,100 B.C., 1,000 years earlier than previous finds.

The discovery was made in the same mysterious Armenian cave complex where ancient leather shoe was found last summer.

This is the oldest complete wine production facility ever found, including grape seeds, withered grape vines, remains of pressed grapes, a rudimentary wine press, a clay vat apparently used for fermentation, wine-soaked potsherds, and even a cup and drinking bowl.

The discovery in 2007 of what appeared to be ancient grape seeds inspired the team to begin excavating Areni-1, a cave complex located in a canyon where the Little Caucasus mountains approach the northern end of the Zagros mountain range, near Armenia's southern border with Iran. The cave is outside a tiny Armenian village still known for its wine-making activities. 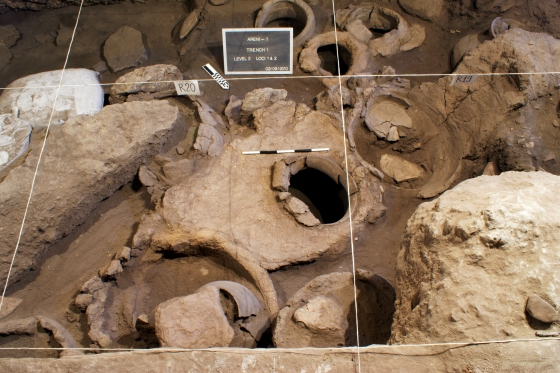 The wine press (center) is clearly evident in this photograph of the excavation. Behind the press is an archaeological identification kit. The vat (to the right of the press), which was apparently used for accumulating grape juice and the consequent wine fermentation, emerges clearly here as a result of the excavation. Credit: Gregory Areshian

Radiocarbon analysis by researchers at UC Irvine and Oxford University has dated the installation and associated artifacts to between 4100 B.C. and 4000 B.C., or the Late Chalcolithic Period, also known as the Copper Age in recognition of the technological advances that paved the way for metal to replace stone tools.

Archaeologists found one shallow basin made of pressed clay measuring about 3 feet by 3-and-a-half feet. Surrounded by a thick rim that would have contained juices, and positioned so as to drain into the deep vat, the basin appears to have served as a wine press. Similarly structured wine-pressing devices were in use as recently as the 19th century throughout the Mediterranean and the Caucasus.  No evidence was found of an apparatus to smash the grapes against the wine press, but the absence does not trouble the archaeologists.

"For the first time, we have a complete archaeological picture of wine production dating back 6,100 years," said Gregory Areshian, co-director of the excavation and assistant director of UCLA's Cotsen Institute of Archaeology.   "People obviously were stomping the grapes with their feet, just the way it was done all over the Mediterranean and the way it was originally done in California."

All around and on top of the wine press archaeologists found handfuls of grape seeds, remains of pressed grapes and grape must, and dozens of desiccated vines. After examining the seeds, paleobotanists from three separate institutions determined the species to be Vitis vinifera vinifera, the domesticated variety of grape still used to make wine.

The vat, at just over 2 feet in height, would have held between 14 and 15 gallons of liquid, Areshian estimates. A dark gray layer clung to three potsherds — two of which rested on the press and the third which was still attached to the vat. Analysis of the residue by chemists at UCLA's Pasarow Mass Spectrometry Laboratory confirmed the presence of the plant pigment malvidin, which is known to appear in only one other fruit native to the area: pomegranates. 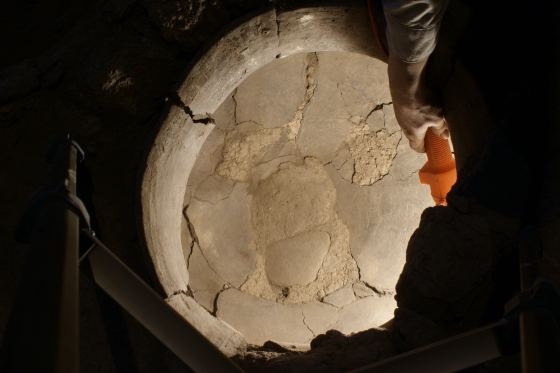 The inside of the vat into which the wine press drained. On the inner surface of the vat, below its rim, UCLA chemists found evidence of the plant pigment malvidin, the substance that makes wine stains so difficult to remove from fabric today. The bottom of the vat also is covered with dark gray organic residues.  Credit: Gregory Areshian

"Because no remnants of pomegranates were found in the excavated area, we're confident that the vessels held something made with grape juice," Areshian said.

The size of the vessel during an era that predated mechanical refrigeration by many millennia points to the likelihood that the liquid was wine, the researchers stress.

"At that time, there was no way to preserve juice without fermenting it," Areshian said. "At this volume, any unfermented juice would sour immediately, so the contents almost certainly had to be wine."

The team also unearthed one cylindrical cup made of some kind of animal horn and one complete drinking bowl of clay, as well as many bowl fragments.

The closest comparable collection of remains was found in the late 1980s by German archaeologists in the tomb of the ancient Egyptian king Scorpion I, the researchers said. Dating to around 3150 B.C., that find consisted of grape seeds, grape skins, dried pulp and imported ceramic jars covered inside with a yellow residue chemically consistent with wine.

After the Areni-1 discovery, the next earliest example of an actual wine press is two and a half millennia younger: Two plaster basins that appear to have been used to press grapes between 1650 B.C. and 1550 B.C. were excavated in what is now Israel's West Bank in 1963.

Over the years, archaeologists have claimed to find evidence of wine dating as far back as 6000 B.C.–5500 B.C. And references to the art and craft of wringing an inebriant from grapes appear in all kinds of ancient settings. After Noah's Ark landed on Mount Ararat, for instance, the Bible says he planted a vineyard, harvested grapes, produced wine and got drunk. Ancient Egyptian murals depict details of wine-making. Whatever form it takes, early evidence of wine production provides a window into a key transition in human development, scientists say.

"Deliberate fermentation of carbohydrates into alcohol has been suggested as a possible factor that prompted the domestication of wild plants and the development of ceramic technology," said Barnard, who teaches in the UCLA Department of Near Eastern Languages and Cultures.

In addition to its age and wealth of wine-making elements, the Areni-1 find is notable for its numerous levels of confirmation. In a field where claims often rest on one or two sets of collaborating evidence, this find is supported by radiocarbon dating, paleobotanical analysis and a new approach to analyzing wine residue based on the presence of malvidin. Most prior claims of ancient wine have rested on the presence of tartaric acid — which is present in grapes but also, at least in some level, in many other fruits and vegetables — or on the presence of tree resins that were added to preserve the wine and improve its taste, as is done today with retsina, a wine flavored with pine resin.


6,100-year-old desiccated grape stems and dried, pressed grapes was found on and around the wine press in the Armenian cave.  Credit:  Gregory Areshian

"Tartaric acid alone can't act as a reliable indicator for wine," Areshian said. "It is present in too many other fruits and vegetables, including hawthorn, which still is a popular fruit in the area, but also in a range of other fruits, including tamarind, star fruit and yellow plum."

"Resins could indicate wine, but because they were used for a large number of other purposes, ranging from incense to glue, they also are unreliable indicators for wine," Barnard said. "Moreover, we have no idea how wide the preference for retsina-like wine spread."

The beauty of malvidin, the UCLA team emphasizes, is the limited number of options for its source. The deeply red molecule gives grapes and wine their red color and makes their stains so difficult to remove.

"In a context that includes elements used for wine production, malvidin is highly reliable evidence of wine," Areshian said.

Areshian and Ron Pinhasi, an archaeologist at Ireland's University College Cork and a co-director of the excavation project, captured the world's imagination in June, when they announced the discovery of a single 5,500-year-old leather moccasin at the Areni-1 site. It is believed to be the oldest leather shoe ever found.

The precise identity of the wine-swilling shoe-wearers remains a mystery, although they are believed to be the predecessors of the Kura-Araxes people, an early Transcaucasian group. Nevertheless, archaeologists who have been excavating the 7,500-square-foot-plus site since 2007 think they have an idea of how the wine was used. Because the press and jugs were discovered among dozens of grave sites, the archaeologists believe the wine may have played a ceremonial role.

"This wine wasn't used to unwind at the end of the day," Areshian said.

The archaeologists believe wine-making for day-to-day consumption would have occurred outside the cave, although they have yet to find evidence for these activities. Still, they believe it is only a matter of time before someone does.

"The fact that a fully developed wine production facility seems to have been preserved at this site strongly suggests that there are older, less well-developed instances of this technology, although these have so far not been found," Barnard said.

An analysis of the discovery is presented in the Journal of Archaeological Science.

The research was funded by the National Geographic Society, the Steinmetz Foundation, the Boochever Family Trust, the Gfoeller Foundation Inc. and the Chitjian Family Foundation.   The scientific-analytical part of the project also received support from the National Center for Research Resources, the National Science Foundation and the National Institutes of Health.