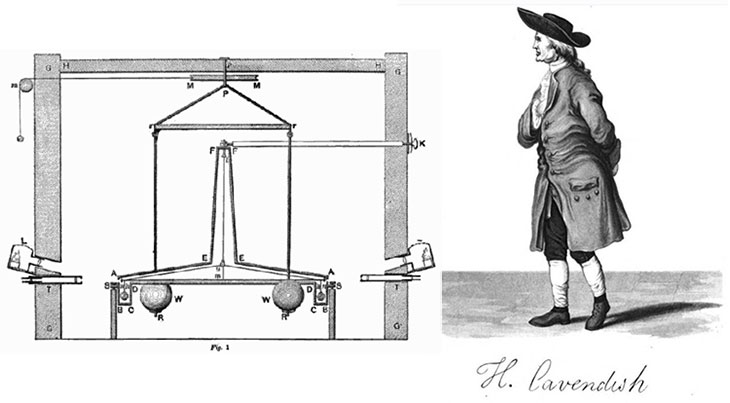 By: Sara Rennekamp, Inside Science

(Inside Science, Currents Blog) -- Henry Cavendish was an odd man. He never addressed strangers directly and was petrified of women. He had a staircase built into the back of his house to avoid any encounter with the ladies he employed. When it came time for his final oral exams to complete his natural philosophy degree at Cambridge University – that's what they called a science degree before the advent of modern science and specialized degrees – he dropped out of school all together rather than talk in public.

But, beneath these eccentricities, Henry Cavendish was among the most brilliant minds of the 18th century. He was an accomplished chemist and physicist and made major contributions to electrical research.

But his crowning achievement, and for what he is perhaps best known, was his design of the first experiment to measure the tiny force of gravity between masses in a laboratory.

Cavendish demonstrated this using a torsion balance, a horizontally suspended wooden rod with a small lead sphere at each end. Two large lead spheres were fixed in place, 9 inches from each of the smaller spheres. When the torsion balance was released and allowed to move freely, the lead balls would be attracted by the gravitational force. 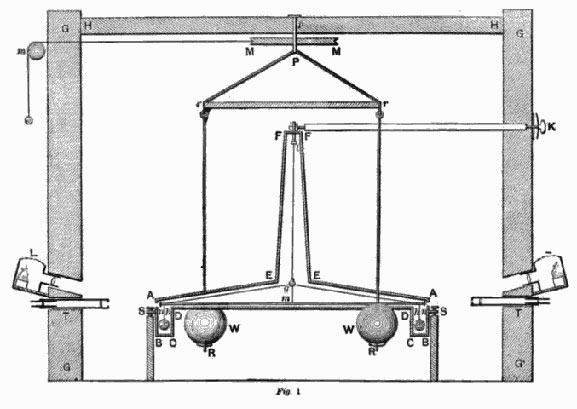 Vertical section drawing of Cavendish's torsion balance instrument including the building in which it was housed. Figure 1 of Cavendish's paper. Courtesy via Wikipedia

The class shown here is taught by my husband, with whom I share a considerable attraction, gravitationally and otherwise.

After more than a year of observation, Cavendish confirmed that the suspended lead balls would always tend to accelerate toward the large lead masses. He reasoned that this acceleration was caused by the force of gravity on a small scale.

Of course, this marvelous demonstration of gravitational force was only a preamble to Cavendish’s ultimate goal to measure the density of Earth, which he succeeded in doing by using the measurements taken from his experiment and applying them to Newton’s law of gravitation. In fact, the figure he came up with for Earth’s density using his wooden rods and lead spheres is within 1 percent of the figure agreed upon today – a figure obtained using much more sophisticated equipment than what Cavendish had on hand in his day.

Cavendish published his findings in 1798 in the Philosophical Transaction of the Royal Society journal.

Cavendish’s experiment is a splendid demonstration of the force of gravity on any object with mass from the perspective of Newtonian physics. Einstein’s general theory of relativity, the modern theory of gravity, usually comes into play for much larger masses (think black holes) and size scales (think two stars orbiting each other). But for most situations that you and I encounter every day, Newton’s and Cavendish’s observations are more than enough fodder for wonder.

Sara Rennekamp is an editor at Inside Science. She tweets at @SaraRoseHalley and often daydreams about black holes. Reprinted with permission from Inside Science, an editorially independent news product of the American Institute of Physics, a nonprofit organization dedicated to advancing, promoting and serving the physical sciences.
Inside Science
More Articles All Articles
About