Johannes Koelman
Gravity is an amazing force. It can grow enormous structures in the universe. If you ever find yourself under a dark night sky at a spot far away from city light, have a look at the constellation Andromeda. With bare eyes you should just be able to spot a tiny smudge in this constellation. You need good eyes that are well adapted to the dark, and the moon with its overwhelming brightness needs to be out of sight. And it definitely helps if you happen to carry with you a pair of binoculars.

Once you have spotted it, look more closely at that faint smudge. It is the furthest object you can see with bare eyes. You are looking at a galaxy somewhat larger than our Milky Way. It is the enormous distance you are away from Andromeda that reduces it to a faint fuzzy in the night sky. The light from this galaxy has been traveling an amazing 2.5 million years to reach you. Two-and-a-half million light years is a distance far beyond human imagination. Yet you are more strongly bonded to Andromeda than to earth.

You read that correctly. You are gravitationally more strongly bonded to Andromeda than you are to earth. 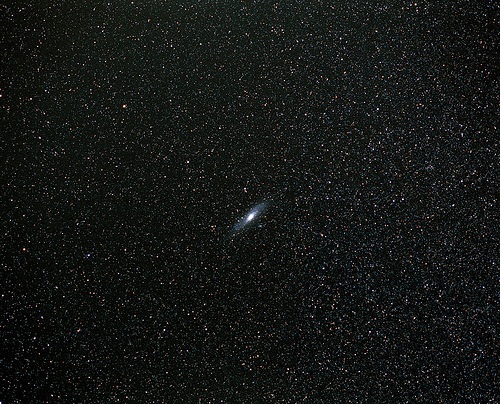 Andromeda: a faint smudge in the night sky

Let me make that more precise. Gravitation makes you stick to earth. And that gravitational binding to earth is pretty strong. Ignoring the drag in earth's atmosphere, you would need to jump up at a speed of about 11 km per second (7 mi/s) to escape earth's gravitational pull. No small task. However, to escape that faint smudge in the sky from your present position, you need to jump with much more force. In fact, you need to jump in the direction away from this smudge at a speed of 88 km/s (55 mi/s) relative to the same smudge.*

Few people realize the amazing range of gravity. Gravity is a force that adds up. Andromeda with its trillion stars is incredibly more heavy than earth, and an overwhelming gravitational attraction comes with it that easily compensates for the enormous distance. The fact that you are gravitationally bound to Andromeda, makes everything around you - earth, the solar system and the whole Milky Way - bound to Andromeda. It should therefore not surprise you that the Milky Way is on a head-on collision course with Andromeda. Both galaxies are 'falling into' each other. Don't be worried, this is a long fall, and you and I won't witness the final stage of it, and neither will your children, your grand-children, your grand-grand-children, ... , and so on including your grand100,000,000-children. And when the galaxy merger finally takes place, it will perhaps be a most welcome event as around that time we - if we still exists - will need some forceful intervention to pull us away from sun, which soon thereafter will blow up and turn into a red giant.

But I digress. Back to you and me being bound to Andromeda. You might ask yourself, are we also gravitationally bound to much more distant galaxies?

The above reasoning assumes a fixed mass M. Obviously, the range of gravitational bonding can be grown by increasing that mass. Bring enough galaxies together, and their total mass will increase the range of gravitational bonding. This way much larger structures are feasible. But there is a limit to structure size. For one, enough time must have passed since the start of the universe to make a large cluster possible. In simple terms, starting from a very uniform big bang, it takes time to form inhomogeneities. Based on recent analysis, the maximum structure possible in the current universe is believed to be roughly of size 1.2 billion light years. That is larger than the distance from us to Andromeda by a factor 500. Yet, recent mappings of Large Quasar Groups (LQGs) seem to challenge this limit to structure size.

Quasars are a highly active, ultra luminous galaxy cores. The intense activity of these cores led astronomers to conclude their brightness must result from enormous energies liberated by mass falling into supermassive objects residing inside the galaxy core. Some quasars change their intensity in a few minutes, and whatever the exact change mechanism might be, it requires coordination over distances no more than a few light minutes across. This means that the light of quasars originates from supermassive objects filling very small regions. The objects that fit the bill are supermassive black holes. 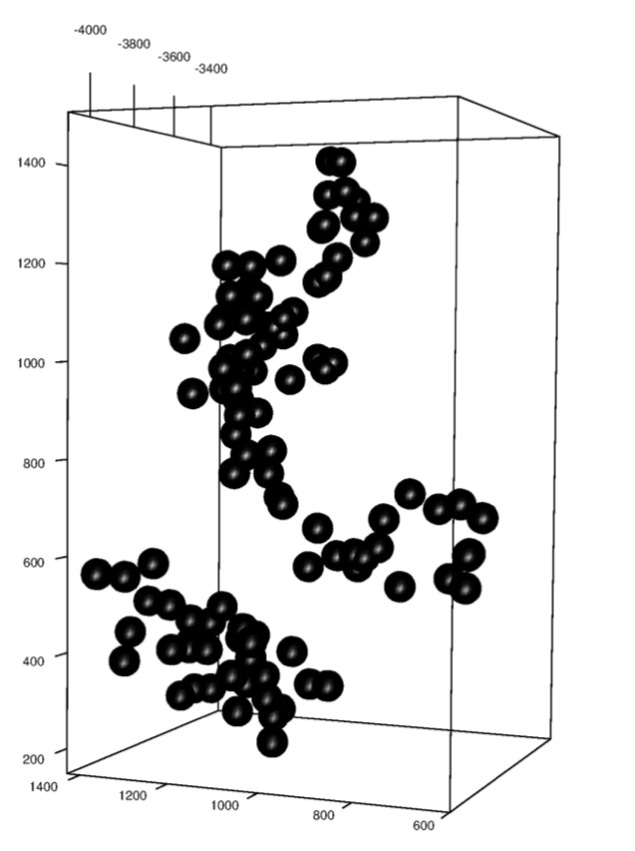 The newly discovered Huge-LQG next to its neighbor, CCLQG, the previously largest known LQG. The tick marks represent intervals of about 700 million light years. The Huge-LQG appears as the elongated upper group. For visualization purposes, the quasars in both groups are shown as spheres 200 million lightyears across. The Huge-LQG and the CCLQG clearly are distinct entities. [Courtesy: Roger Clowes et al. ]

LQGs form due to the clustering of quasars and the supermassive black holes that feed them. This can result in structures much larger than typical galaxy clusters. And now a LQG, dubbed the "Huge-LQG", has been discovered, that is even bigger than the largest size of inhomogeneity thought possible in our current universe. This is an amazing discovery that is creating considerable waves in the popular science media.

The Huge-LQG takes the form of an elongated shape with a cross section of 1.2 to 2 billion light years and a length of roughly 4 billion light years. The structure discovered could be an accidental grouping of multiple gravitationally bound clusters. Regardless, it presents a potential challenge to the cosmological principle stating that at large scales from any observation point the universe is isotropic. Previously, the "Sloan Great Wall" that turned up in redshift sky surveys was also thought to challenge the cosmological principle and thereby our current cosmological model. However, a more detailed study proved this not to be the case. Also with the Huge-LQG there are more details and complications that need to be checked thoroughly before we can conclude that the observed structure necessitates an update to the current cosmological model.