News Staff
The Andromeda galaxy is our nearest galactic neighbor in space. Though it is 2.5 million light-years away, its spiral of over 100 billion stars makes it visible as a cigar-shaped smudge of light high in the autumn sky.

But there is also something that takes Hubble to notice - a huge bubble of hot, diffuse plasma surrounding it. If we could see that gargantuan halo from Earth, it would appear to be 100 times the angular diameter of the full Moon.

The gargantuan halo can be thought of as the "atmosphere" of a galaxy and is estimated to contain half the mass of the stars in the Andromeda galaxy itself. Astronomers were able to identify the halo by measuring how it filtered the light of distant bright background objects called quasars. 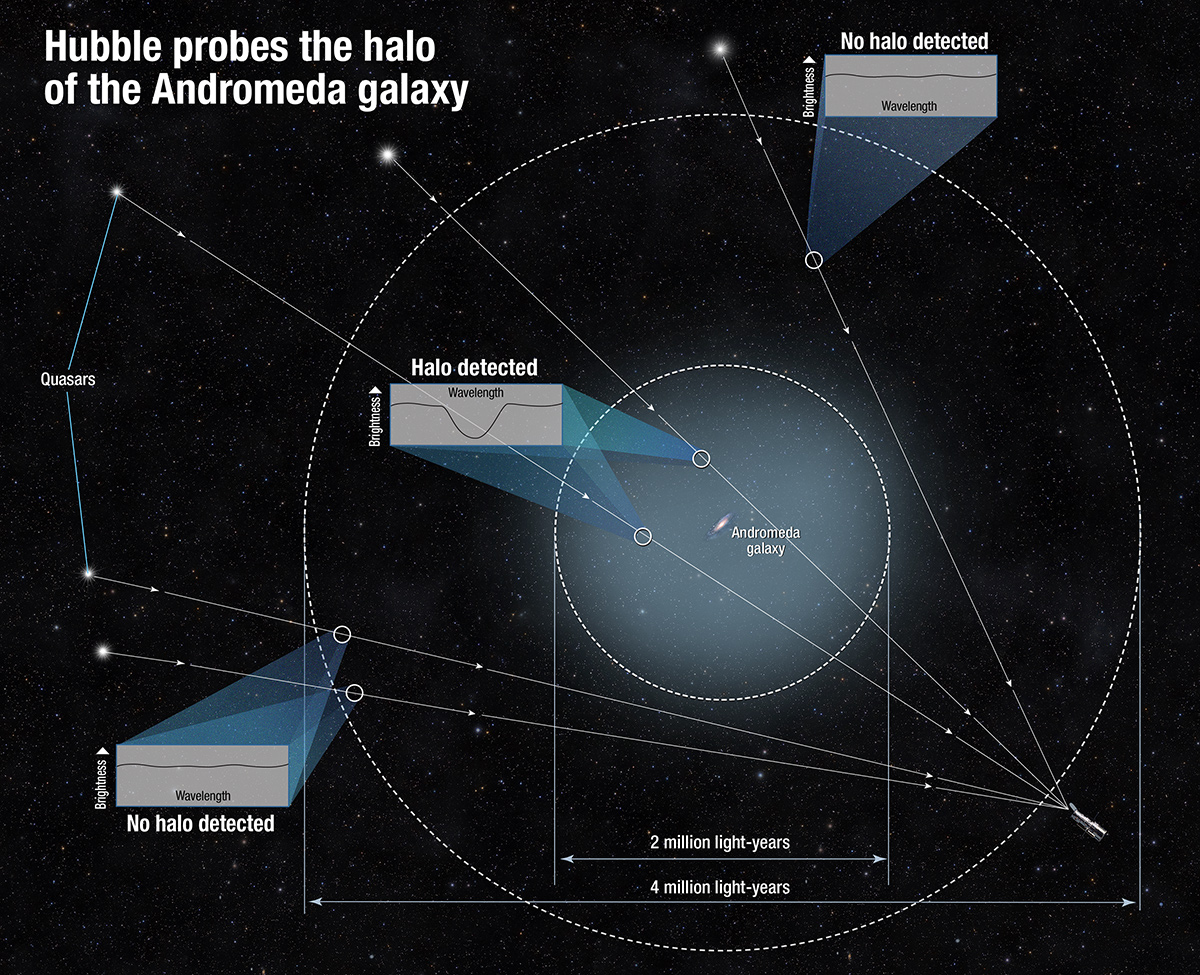 How scientists determined the size of the halo of the Andromeda galaxy. Because the gas in the halo is dark, the team measured it by using the light from quasars, the very distant bright cores of active galaxies powered by black holes. They observed the quasars' light as it traveled through the intervening gas. The halo's gas absorbed some of that light and made the quasar appear darker in a very small wavelength range. By measuring the tiny dip in brightness at that specific range, scientists could tell how much gas is between us and each quasar. Some quasars showed no dip in brightness, and this helped define the size of the halo.Credit: NASA, ESA, and A. Feild (STScI)

"Halos are the gaseous atmospheres of galaxies. The properties of these gaseous halos control the rate at which stars form in galaxies according to models of galaxy formation," explained the lead investigator, Nicolas Lehner of the University of Notre Dame, Indiana.

Earlier research from Hubble's Cosmic Origins Spectrograph (COS)-Halos program studied 44 distant galaxies and found halos like Andromeda's, but never before has such a massive halo been seen in a neighboring galaxy. Because the previously studied galaxies were much farther away, they appeared much smaller on the sky. Only one quasar could be detected behind each faraway galaxy, providing only one light anchor point to map their halo size and structure. With its close proximity to Earth and its correspondingly large footprint on the sky, Andromeda provides a far more extensive sampling of a lot of background quasars.

"As the light from the quasars travels toward Hubble, the halo's gas will absorb some of that light and make the quasar appear a little darker in just a very small wavelength range," explains co-investigator J. Christopher Howk, also of Notre Dame. "By measuring the dip in brightness in that range, we can tell how much halo gas from M31 there is between us and that quasar."

What about our halo?

Large-scale simulations of galaxies suggest that the halo formed at the same time as the rest of Andromeda. The team also determined that it is enriched in elements much heavier than hydrogen and helium, and the only way to get these heavy elements is from exploding stars called supernovae. The supernovae erupt in Andromeda's star-filled disk and violently blow these heavier elements far out into space. Over Andromeda's lifetime, nearly half of all the heavy elements made by its stars have been expelled far beyond the galaxy's 200,000-light-year-diameter stellar disk.

Because we live inside the Milky Way, scientists cannot determine whether or not such an equally massive and extended halo exists around our galaxy. It's a case of not being able to see the forest for the trees.
News Articles
More Articles All Articles
About