Why Some Deer Have Fangs Instead Of Antlers Like Most Other Cloven-Hoofed Animals
By Inside Science | November 16th 2018 08:55 AM | Print | E-mail

By Nala Rogers, Inside Science -- When do you need a broadsword, and when would you be better off with a dagger? That's the question that faced artiodactyls, the group of mammals that includes deer, antelope, goats, giraffes, pigs, buffalo and cows, during their evolution.

Many male artiodactyls fight over females using weaponized body parts such as horns and antlers. But pigs and several groups of deerlike animals have tusks instead, and a few species have both. Water deer have tusks so pronounced they are nicknamed "vampire deer."

To understand this variation, researchers compared the habitats and behavior of 63 species, including members of every living artiodactyl group except hippos and whales. They also measured the canine teeth of each species using skeletal specimens in museums.

The species in which males' canines were enlarged into tusks were much more likely to be small-bodied and to live solitary lifestyles. And while no direct statistical relationship was found between tusks and habitat, the small, solitary species were more likely to live in dense foliage. For example, the rabbit-sized Java mouse deer has tusks more than half an inch long, and it lives in undergrowth so dense that it makes tunnels as it moves from place to place. 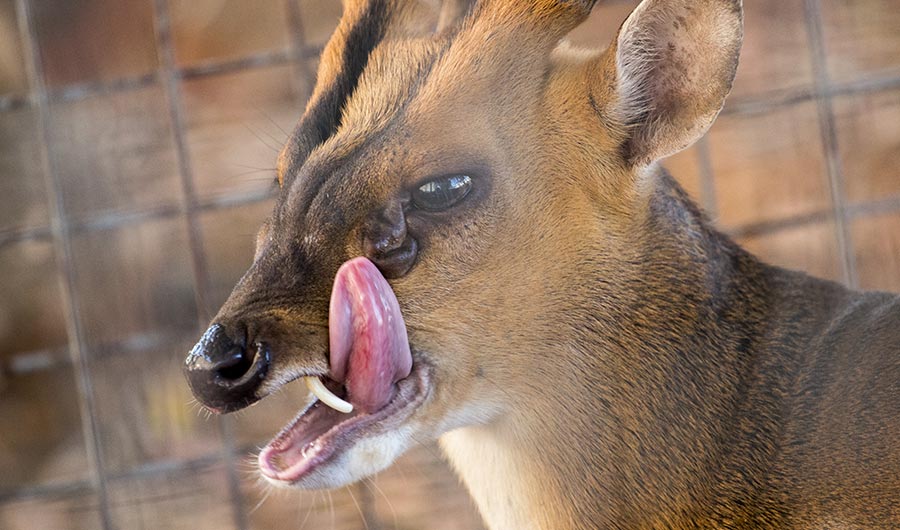 This makes sense, say the researchers, because daggerlike tusks are likely to be the most effective weapons in thick underbrush. In open habitats, there is more room to swing more elaborate horns and antlers without getting tangled. Moreover, the mere sight of these weapons is often enough to intimidate another male into backing down.

Such signals would be less useful in dense brush. "There's no point in signaling, 'Hey, I'm big and strong,' because you're already up close with this opponent. So, it makes more sense to prepare for a direct fight and have a slicing, stabbing-type weapon that can inflict more damage," said Ted Stankowich, an evolutionary biologist at California State University, Long Beach, who conducted the study with then undergraduate student Doreen Cabrera. They published the findings Nov. 9 in the Journal of Mammalian Evolution.