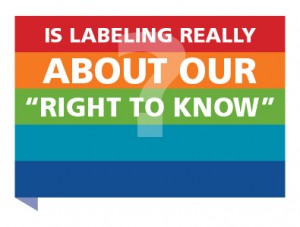 If one believes the backers of mandatory labeling initiatives in Colorado and Oregon, Tuesday’s vote is simple common sense: It’s about the “right to know” what’s in our food.

This is the beguiling message pushed by a myriad of activists linked to such organizations as Right to Know GMO, Label GMOs and Just Label It. It’s powerful and superficially persuasive.

“To be clear the Just Label campaign is not an anti-GMO effort,” says Gary Hirshberg, founder of organic food maker Stonyfield Organic, and director of Just Label It.

After all, what but a conspiracy of the federal government and global corporations could be against providing helpful information to consumers about what they eat? But in less guarded moments, Hirshberg makes it clear that the labeling movement has nothing at all to do with science, information and discourse—it is exclusively an anti-GMO effort.

“Genetically modified organisms are one of the most dangerous and radical changes to our food supply,” he has said. Hirshberg has become a millionaire many times over selling pricey organic foods promoted with labeled marketing claims like “No Yucky Stuff,” which falsely suggests that more affordable conventional products are somehow unsafe and inferior. “Because GMOs are not labeled in the U.S., they might be causing acute or chronic effects,” Hirshberg has also written.

That’s what Orwell would call The Big Lie. The National Academies of Science of almost every country, World Health Organization, American Medical Association and nearly every other medical and food oversight organization in the world along with a host of scientific and scholarly societies have all concluded that GM crops are as safe as any other and pose no special risks to humans or the environment.

There is not one proven or suspected case of “acute or chronic” effects from GMO consumption.

Let’s be clear. The leaders of the ‘right to know’ movement are out to dissimulate, demonize and destroy. These organizations play the ‘right to know card’ as a subterfuge to scare people about the safety of the food system and to divert attention from the sustainability benefits of GM. Are there tradeoffs in adopting crop biotechnology or large-scale agriculture? Of course, and there is room for healthy dialogue.

But make no mistake here: Rational discussion and transparency are not on the mainstream pro-label groups agenda.

Internationally respected and independent Scientific American, in an editorial, demolished the oft-repeated canard that the labeling issue is about transparency and empowering the consumer. “Many people argue for GMO labels in the name of increased consumer choice,” the editors wrote in “Labels for GMOs Are a Bad Idea”. “On the contrary, such labels have limited people’s options. … Ultimately, we are deciding whether we will continue to develop an immensely beneficial technology or shun it based on unfounded fears.”

The GLP has an ongoing series of infographics on biotechnology. This entry in our series presents the actual words of the world’s most prominent pro-labeling activists—those who claim on NPR and the Nightly News that this issue is simply about a ‘right to know’ when their real agenda is just the opposite.

Here are their comments made when their guard is down—when they speak among ‘friends’—people who are dedicated to destroying the science of genetic engineering and limiting consumer choice and right to know.

Jon Entine, executive director of the Genetic Literacy Project, is a Senior Fellow at the World Food Center, Institute for Food and Agricultural Literacy, University of California-Davis. Follow @JonEntine on Twitter
Jon Entine
More Articles All Articles
About