In 1978, Louise Joy Brown was the first child to be Born through In vitro Fertilization (IVF). In 2010, Dr. Robert G. Edwards was awarded Nobel Prize in Physiology or medicine for his ground breaking work in the development of IVF.

The Problem: 10% of the couples worldwide have problems conceiving.

The Ground work: Dr. Robert G. Edwards did extensive research on the Hormones that induce the maturation of oocytes and their ovulation. He had to overcome the technical challenges in basic and advanced Biochemical techniques to establish IVF.

The Procedure: Oocytes arrested at the metaphase stage of meiosis II are retrieved prior to 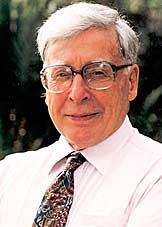 ovulation from the ovary by laparoscopy. The oocytes are placed in a culture dish with medium and mixed with sperm. The medium condition promotes sperm activation in vitro, a necessary requirement for the fertilization process. The egg-sperm interactions relieve the meiosis II arrest of the egg. This results in the formation of two haploid sets of chromosomes, one set that will fuse with the haploid set of chromosomes contributed by the sperm, and a second that is discarded (the second polar body). The fertilization process results in the formation of an embryo that undergoes a number of cell divisions in vitro. The embryo is transferred back to the uterus at the eight-cell stage (2.5 days after onset of fertilization) using a thin needle. The embryo will divide further in the uterus until it reaches the blastula stage and thereafter implant into the wall of the uterine lining, the endometrium. Further embryo development will take place at this location. Children born after IVF are in general as healthy as children born after natural conception according to several long-term follow-up studies.


Just A Column
More Articles All Articles
About