Erin Richards
The past few months, it has been difficult to watch TV, browse the internet or any other form of media viewing without some mention of the Octamom. If you are wondering why the villain from Spiderman 2 is on TV so much, then you need to readjust your POV.

In January, Nadya “octamom” Suleman made history when she gave birth to octuplets with the help of in-vitro fertilization (IVF).

News media seem to love stories about multiple births, and have dedicated ample airtime to Suleman and her situation, which has also brought up some other issues including that she does not have a stable salary, lives with her mother and 6 other kids in a three bedroom house that is being threatened with foreclosure.

Public backlash has thus risen against the octamom, for purposefully bringing in 8 more children into this world, without adequate means to take care of them.

But the mother is not the only one to blame. IVF clinics should to do more background on their clients and make sure that they are ready, able and are capable of raising children (a couple of them) as the frequency of multiple births is high when undergoing IVF treatment. It is harder to adopt a child than to undergo IVF treatments. This backwards climate needs to change. 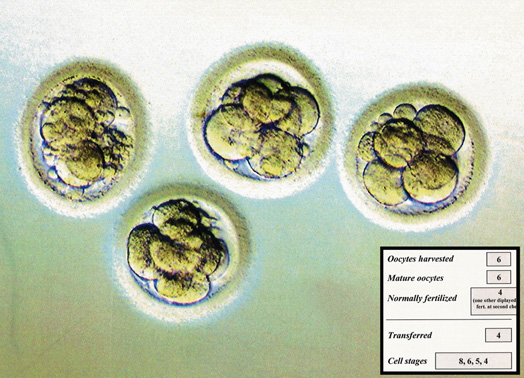 This picture shows developing embryos from an IVF patient. Multiple eggs and multiple implants runs a high risk of multiple births, which can be avoided through advances in IVF research. Photo credit: Medill Reports Chicago, Northwestern

Traditional IVF includes implantation with multiple eggs, and can result in a frequent amount of multiple births. Most parents are overwhelmed with one baby, and the prospect of taking care of three, four (let alone eight) babies is frightening and in some cases, impossible. Implantation of fewer eggs runs the risk of an aborted pregnancy, and failure of eggs, but perhaps should be considered for parents and clinics who wish to avoid staggering numbers of multiple births.

Media attention of Suleman has also drawn the public eye back to the practice of IVF and recent technologies that have “improved” the practice, but these improvements come with a cost: deciding the ethics of IVF.

The Pacific Fertility Center, an IVF clinic in San Francisco, has also garnered some attention, due to their developments of technology that allow for genetic screening of embryos before implantation to best select the healthiest and best to implant and carry to term. Although I do believe that these developments and advances in research on embryonic health are needed, useful and extraordinary, they leave me with a sense of anxiety.

The Pacific Fertility Center (PFC) employs a system called preimplantation genetic screening (PGS). Eggs are removed from the woman, and fertilized using IVF techniques. The DNA of the embryo is then analyzed for novel or inherited genetic errors including Down’s syndrome or cystic fibrosis and more. Based on the DNA results, a healthy embryo is selected and implanted.

According to the PFC, this prevents at risk embryos with possible genetic defects from being implanted and resulting pregnancies either terminated naturally or by choice from the parents.

But is it ethical to normalize IVF and the practice of engineering our babes. Research has gotten so that screening and even gender may be identified while in embryonic stage, and may lead to a selection of eggs based on personal preference.

Gender disorders are also selected against using PGS. Using Fluorsecent In Situ Hybridization, genetic screening can count chromosomes in a cell removed from an embryo in question. Analysis can see which embryos have the normal 23 pairs of chromosomes, and identify ones that may have extra or less than enough sex chromosomes. This eliminates disorders such as Klienfelter’s Syndrome with an XXY, Turner’s with only an X chromosome, or Down ’s syndrome with three copies of chromosome 21.

Identifying mismatched and abnormal chromosomes is vital, yes, but when does this turn into selection of a health male or female embryo over the other? Some people would argue that babies and development should be left alone and nature dictate the outcome, but if a life could be lived free of debilitating disease, wouldn’t you want that for your child?

Are we leading our society down the hill toward test tube people? Will we create our own Brave New World where classes of people are engineered with faults or no?

It seems unlikely that we would ever venture so far, but as research expands, these are important questions for us to consider.

In the end, we must realize that all life is precious, and serious thought and consideration should be given while undergoing any IVF or similar fertility treatments.