Kevin M. Folta
If you'd like to lose a few pounds, poke around the Internet and read about food and farming.

Within ten minutes you will likely find that all of your favorite fare is poised to kill you, contributing to dozens of maladies from allergies, to autism, to Morgellons's disease, to impotence, to cancer. Is it true? Probably not. Why would people put such things on the web?
It is no secret that if you own a computer and an Internet connection, chances are that you have a pantry with plenty of food. Marketers know that it is difficult to convince you to accept their product's positive points--but it is easy to shift you to their product by scaring you away from the competition. Such avenues are exploited daily for profits and politics, burritos, bureaucrats, or baristas. It's rather devious, but it works, and new battle lines ignite around these strategies in the food wars every day.

What if these claims could be tested in transparent, massive, fun experiments that could entertain, teach, and answer a question at the same time? One frequent Internet claim is that animals refuse to eat transgenic (genetically engineered, "GE" or "GMO") corn. That position is repeated often on the Internet, even by folks like Dr. Don M. Huber, retired Purdue University professor, who lends his authority and years of experience to that assertion, suggesting that there is something freakishly poisonous about the food and that animals can sense it.

Anti-biotech author Jeffery Smith also makes the claim. Such concepts have been "liked" or shared tens of thousands of times via some of the Internet's most scientifically questionable channels. 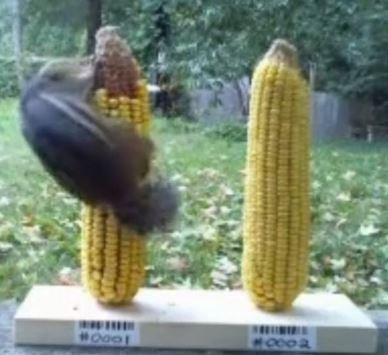 Will wildlife ignore the genetically engineered corn?  Our citizen-science experiment will answer that question!  Join the fun!

Yet farmers that grow GE corn note that wild animals will eat damn near anything they can get their grimy little mitts on. They say the speculation that GE corn is magically repulsive is nonsense. I've seen that an ear of field corn lasts in my yard about 30 minutes before it is dismantled by squirrels and armadillos.

However, because I'm a scientist, anecdotes do not equal data. Together with friends at Biology Fortified, we set out to test the hypothesis that animals will not consume GE corn, using hundreds of independent volunteers. The experiment prep initiated over two years ago. Two kinds of corn were grown for us in Hawaii. One was GE corn harboring many installed traits, where the plant has been treated with glyphosate as part of weed suppression. The other was a non-GE line called an "isoline", it is genetically identical to the GE line but without the transgenes or herbicide treatment.

The plants were grown in neighboring parcels and in identical conditions.

The corn was provided for free by the Monsanto Company, likely at significant expense to them. We felt it was important to use their products, as critics suggest that their corn is the most suspect. The company provided this material for the experiment with standard agreements that were slightly adjusted so that we could freely distribute the materials and publish photos and results on a fast timeline.

The hypothesis is simple: Wild animals will not consume GE corn. The kit contains everything needed to test the hypothesis. For a small donation to cover costs, the recipient receives materials for two experimental replicates and a stand. The samples are blinded, so the experimenter does not know which is GE and which is the corresponding non-GE isoline. Ears are identified by a barcode that is logged at Biology Fortified International Headquarters to limit any potential bias in the experiment. The samples are then placed in an area of wild animal traffic and images taken at 0 and 24 hours.

If the Internet's assertions are true, only one ear should remain after that time--and it is the GE one. Kits will be distributed to citizen scientist volunteers in the USA. Participation costs $25 to cover the costs of shipping (which is expensive), kit assembly, data handling and eventual publication costs. All funds received will be used for this experiment. You can join the experiment here.

Those donating more than $25 will fund kits destined for a waiting list of schools and others unable to donate, yet eager to participate. We hoped to fund the project within 21 days. The project was fully funded in only 17 hours. Additional funding will now support participation up to 1250 participants (there only is 2000 pounds of corn!). We are still recruiting participants!!!

The data obtained will be placed on a freely-accessible website and will be published in a peer-reviewed journal. This simple experiment teaches participants how hypothesis-based science can be used to test a claim where we don't have a definitive answer. After hundreds of independent, double-blind, properly controlled replicates we should have sufficient data to make a strong conclusion about wild animals refusing GE corn. It also will tell us if those promoting such assertions are heroes, or maybe being a little disingenuous.

It is easy to scare people away from food, but science can help fix that. We live in the midst of the safest food supply in human history, and in many places the animals in this experiment will get to enjoy more calories that day than a billion people on this planet.

It is time to change the conversation about food and associated technologies, and dispelling fear is a great first step. We can do that by coupling more people to the scientific process, using it to challenge claims that support non-scientific positions for politics or profit.
Kevin Folta
More Articles All Articles
About