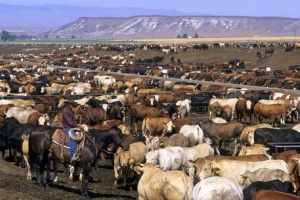 Visit almost any anti-GMO website and you will find alarming headlines about the alleged dangers of GMO foods. They kill pigs, cows and sheep on farms and in lab studies! Humans are next!

“Monsanto’s GMO Feed Creates Horrific Physical Ailments in Animals,” screams a typical article, in AlterNet, a popular anti-GMO site. It touts “new research” but as is typical of such articles and such sites, it neither quotes a study nor links to any independent research.

Although there have been more than 2,000 studies documenting that biotechnology does not pose an unusual threat to human health and genetically modified foods are as safe or safer than conventional or organic foods, questions remain in the minds of many consumers.

What does the research say?

Animal feeding studies are the basis for evaluating the safety of GMO crops. One-off studies of lab animals have occasionally shown some problems. Gilles-Eric Séralini, in his retracted GM corn study (later republished in a non-peer-reviewed anti-GMO journal), claimed rats fed genetically engineered corn developed grotesque cancerous tumors—the kind no farmer would miss among his animals if this cause-effect was genuinely in place.

Anti-GMO crusader Jeffrey Smith, on his personal website, the Institute for Responsible Technology, lists more than a dozen cases in which he claims animals fed GMOs exhibited abnormal conditions, including cancer and early death. He also references his own self-published book, and anecdotal evidence that pigs fed GM feed turned sterile or had false pregnancies and sheep that grazed on BT cotton plants often died.

“Nearly every independent animal feeding safety study on GM foods shows adverse or unexplained effects,” he writes. “But we were not supposed to know about these problems…the biotech industry works overtime to try to hide them.”

Is there any basis to these allegations? After all, globally, food-producing animals consume 70% to 90% of genetically engineered crop biomass, mostly corn and soybean. In the United States alone, animal agriculture produces over 9 billion food-producing animals annually, and more than 95% of these animals consume feed containing GE ingredients. The numbers are similar in large GMO producing countries with a large agricultural sector, such as Brazil and Argentina.

Estimates of the numbers of meals consumed by feed animals since the introduction of GM crops 18 years ago would number well into the trillions. By common sense alone, if GE feed were causing unusual problems among livestock, farmers would have noticed. Dead and sick animals would literally litter farms around the world. Yet there are no anecdotal reports of such mass health problems.

But we don’t need to depend on anecdotes to address these concerns. Writing in the Journal of Animal Science, in the most comprehensive study of GMOs and food ever conducted, University of California-Davis Department of Animal Science geneticist Alison Van Eenennaam and research assistant Amy E. Young reviewed 29 years of livestock productivity and health data from both before and after the introduction of genetically engineered animal feed. [NOTE: article is behind a paywall until October 1.]

The field data represented more than 100 billion animals covering a period before 1996 when animal feed was 100% non-GMO, and after its introduction when it jumped to 90% and more. The documentation included the records of animals examined pre and post mortem, as ill cattle cannot be approved for meat.

What did they find? That GM feed is safe and nutritionally equivalent to non-GMO feed. There was no indication of any unusual trends in the health of animals since 1996 when GMO crops were first harvested. Considering the size of the dataset, it can reasonably be said that the debate over the impact of GE feed on animal health is closed: there is zero extraordinary impact.

The Van Eenennaam study corresponds to other reviews of animal feeding data, some multi-generational and as long two years.

Here is a comprehensive list of animal feeding studies. Many of these studies are independent. The list included systematic reviews, all of which conclude that GMO feed is safe.

As Dr. Steven Novella notes on his blog Neurologica:

[T]his data is observational, meaning the authors are looking at data collected out there in the world and not part of any controlled prospective experiment. Observational data is always subject to unanticipated confounding factors. However, robust observational data is still highly useful, and has the potential to detect any clear signals.

The findings also comport with long-term GMO feeding laboratory studies. The GENERA database, found at Biology Fortified online, lists more than three-dozen examples of multi-year studies. A recent review of 24 of these studies by Snell et. al found: “Results…do not suggest any health hazards and, in general, there were no statistically significant differences within parameters observed.” There have been a few outlier studies, such as the retracted GMO corn research. But if Séralini’s data were real and 80% of food was poison, animals and people would be dropping like flies.

The authors also found no evidence to suggest any health affect on humans who eat those animals. No study has revealed any differences in the nutritional profile of animal products derived from GE-fed animals. Because DNA and protein are normal components of the diet that are digested, there are no detectable or reliably quantifiable traces of GE components in milk, meat, and eggs following consumption of GE feed.

In other words, the debate over the risks associated with GMO food is effectively over. As Novella writes:

We now have a large set of data, both experimental and observational, showing that genetically modified feed is safe and nutritionally equivalent to non-GMO feed. There does not appear to be any health risk to the animals, and it is even less likely that there could be any health effect on humans who eat those animals.

In order to maintain the position that GMOs are not adequately tested, or that they are harmful or risky, you have to either highly selectively cherry pick a few outliers of low scientific quality, or you have to simply deny the science.

Jon Entine, executive director of the Genetic Literacy Project, is a Senior Fellow at the World FoodCenter, Institute for Food and Agricultural Literacy, University ofCalifornia-Davis. Follow @JonEntine on Twitter