With all the huge (and sadly tragic, in some cases) storms we have had in mostly the middle to eastern portions of the United States this Spring, many opportunities arise to see natural events rarely witnessed. Some are obvious, such as the bears in trees in the Louisiana floods (I heard on the radio they can survive in the canopy for up to three weeks!) Other natural occurrences are not so easy to observe – unless you know where to look.


I had the rare (for me anyway) opportunity to use a chainsaw a few years back. It was my first experience cutting wood. It was the old ash tree in the back of my friend’s house. The tree had been dead for a long time and pieces of it started falling on things – fences, cars, swings and so on. So, a professional cut the big dead branches off and I volunteered to cut them up and move them out. Not one of my better ideas!


But, I did have some great bug fortune for my effort. Ichneumonid wasps! [Ick-new-mon-id] The old, dead wood had been attracting beetles for years and the chainsaw work put the smells of fresh wood in the air and the wasps came running, well, flying. The Ichneumonid wasp is a highly specialized parasite. Its larvae (babies) feed on the larvae of wood-boring beetles. The beetle larvae are the ones that do the boring.


Wood-boring beetles are very common everywhere. A mother beetle lays her eggs under the bark of a tree with her hardened, specialized ovipositor (egg depositor). Her babies hatch and begin eating the wood, boring tunnels as they go. The tunnels get wider and wider as the grubs grow. Eventually, each grub will either leave the tree, and make its pupa on or under the ground or pupate right in the tunnel. The adult beetle will then look for a mate and a good place to lay eggs. As part of the ‘harmonious’ cycle of Nature, they live their lives and the trees deal with it. Sometimes introduced, invasive beetles, such as the Emerald Ash Borer Beetle (Agrilus planipennis or A. marcopoli) can cause severe economic and ecological damage.


Entire communities of life form around this beetle grub feeding phenomenon. There are hoards of parasites, predators and scavengers who take advantage of the artifacts of these beetle grubs tunneling through woody stems, branches and trunks.


Ichneumonid wasps are amazing-looking parasitic insects that get in on the game. The one who visited my backyard tree removal project, probably Megarhyssa macrurus, was about an inch long, thin and angular, with slight but tremendously fine-tuned wings. Her body was almost checkered in her light brown and auburn markings. And while Ichneumonids are wasps, they cannot sting people, even if they try.


The most remarkable feature on these insects is their tail. It isn’t actually a tail, but anyone describing an Ichneumonid would tell you how long its tail is! The whip-like extension on the end of this wasp’s abdomen is its ovipositor, or egg-layer, and in some relatives of these wasps, the ovipositor is used as a stinger. The ovipositor of an Ichneumonid wasp is too long to even think about stinging with it. But it is very good at getting through the wood to find burrowing beetle grubs. And cutting the old, dead wood in the back yard gave me the rare opportunity to see one Ichneumonid use hers!


The Ichneumonid mother walks along the bark of dead wood and, with her feet, can feel the chewing vibrations a beetle grub is making below. She raises and curls under her long, thin ovipositor. While two sheath-like structures pull back like thin, graceful hairs, the central shaft slides easily into the bark. She reaches her spear all the way down through the wood to the tunnel, and inserts it into the side of the beetle grub’s body to lay her eggs. It’s amazing she can find her target so readily!


When she is actually laying her eggs, the wasp is curved in a dramatic arc and sits poised for several minutes. Then she quickly slides out her long egg-laying sword, readjusts its protective sheaths, 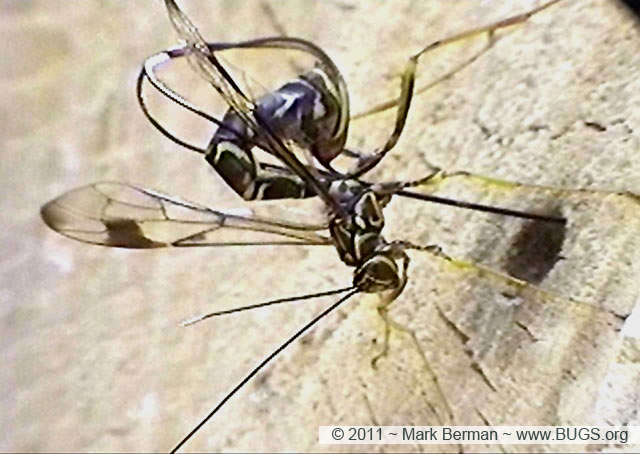 looks around, and flies off. Her larvae will hatch and eat the beetle larva from the inside, saving the important parts until the end, so the beetle grub stays alive and growing until they get their fill. Then, usually, the wasp larvae will pupate right there in the tunnel, sometimes in or on the dead beetle grub, and the adult wasp will then fly off to start it all over. She has done her babies well!


I, on the other hand had about ten more huge branches to cut up and an overheated chainsaw on hourly rental. But this little natural interlude was a great way to make the most out of a break!

While you’re out and about this late Spring and early Summer, especially after a big storm, listen for the chainsaws! If you encounter someone cutting up some wood (and they're not wearing a hockey mask!), or if you find a safe woodpile to explore, look for the beautiful and bizarre Ichneumonid Wasp parasites!

Lessons from BUGS
More Articles All Articles
About

I am a Teacher and Public Speaker first, an Entomologist second, a naturalist, a videographer, a photographer, a web designer and have multiple other...