Mark Changizi
“Come on into the hot tub,” I told my three year old boy. But he wouldn’t budge. No way was he joining his older sister in there. “It’s warm, and it feels nice!” I urged, “There’s nothing to be afraid of.” But it was only when I turned off the jets that I could eventually coax him in.

“Why would my boy be so afraid of a hot tub?” I wondered. But as I reflected upon my panty-waist boy, I decided that perhaps I wasn’t being fair to him. In fact, in hindsight, I think he was behaving rationally. Hot tubs are frightening. They violently churn and bubble, as if they are actually boiling. I have spent so much time in hot tubs over the years that I now hardly notice the foam, the burning temperature, the Pseudomonas bacteria and the skin-ripping, high-pressure jets.

We get used to things, and not just to jacuzzis. My jacuzzification also happens for intellectual matters (a topic of an earlier piece, The Value of Being Aloof: Or, How Not to Get Absorbed in Someone Else’s Abdomen). One generation’s jacuzzi is another generation’s maelstrom.

In particular, we get used to evolution. We scientists, especially. We’re so accustomed to evolution that when we find skeptics of evolution, we think of them as poor, blind, close-minded saps who can’t see the most obvious truths. 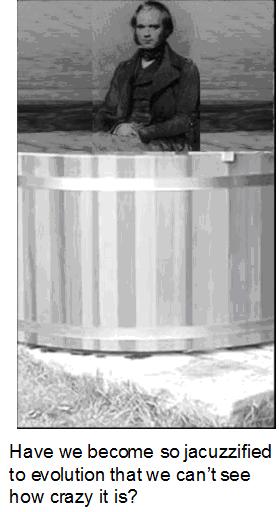 But how obvious is evolution, really? And how close-minded are those who don’t yet accept evolution?

Let’s start with the obviousness of evolution. First and foremost…evolution ain’t obvious! Evolution is perhaps the craziest true theory ever!   "Let me get this straight: Add a teaspoon of heritable variation, a ton of eating one another, and epochs of time…get yourself a superzoo of fantastically engineered creatures. Yeah, that’s not crazy!”

The only reason most of us scientists don’t find evolution crazy is that we’re jacuzzified to a wrinkley pulp. And this level of comfort with the bizarre theory of evolution can be counterproductive when trying to explain evolution to the uninitiated. You won’t convince my three-year-old to get into the hot tub by suggesting that there is no bubbling or churning – he can see the bubbling and churning with his own eyes. (BTW, no intent to analogize evolution skeptics with three-year-olds! Just a useful analogy that popped up.) If you’re so jacuzzified that you fail to see the churning, you will be incapable of addressing the real worry: that the churning might hurt.

Similarly, if you’re so used to evolution that you fail to see how weird it is, you’ll be in a poor position to explain why it isn’t as crazy as it at first sounds. Better to say, “Yes, evolution is crazy, but there’s overwhelming evidence that it is, indeed, the mechanism underlying the emergence of life in all its glory.” (And you should also admit that, although we have mountains of evidence that evolution is the mechanism, we are very far from understanding how exactly it does it, just as we’re sure the brain underlies our thoughts but do not comprehend how the brain works. This was the topic of an earlier ScientificBlogging.com piece titled Is Evolution Fast Enough?’ How I Responded.

Religious folk surely have their hang-ups (whereas I am utterly hang-up-less), but religious doctrine has come a long way over the centuries. Few still believe the Earth is at the center of the universe, for example, something that was once perhaps just as central to the religious world view as creation. But the evidence for the Earth not being at the center is overwhelming. And more important than being overwhelming, the idea that the Earth is not at the center of the universe is not nearly as crazy as evolution.

Religion can, then, be convinced of scientific discoveries it is initially opposed to. And, it is reasonable to expect that the more intrinsically implausible a theory sounds, the longer it will take for religion to become convinced. Evolution is the king of the implausible, and perhaps that’s why it is one of the last major scientific truths not having infiltrated all the corners of religion.

But evolution won’t infiltrate religion if we scientists can’t address the skeptic’s worries. And we won’t be able to address the worries if we’re so overcooked in evolution that we are incapable of seeing just how preposterous it seems.
Mark Changizi
More Articles All Articles
About