Mark Changizi
Many illusions are like spherically curved space. Below on the left (fig. 1 ) is a geometrical illusion, and on the right is a ball with some great arcs drawn on it.

Notice the similarities: the distortions in the illusion are qualitatively similar to the non-Euclidean nature of the contours on the ball.

Why? Is there something in perception that’s like curved space? 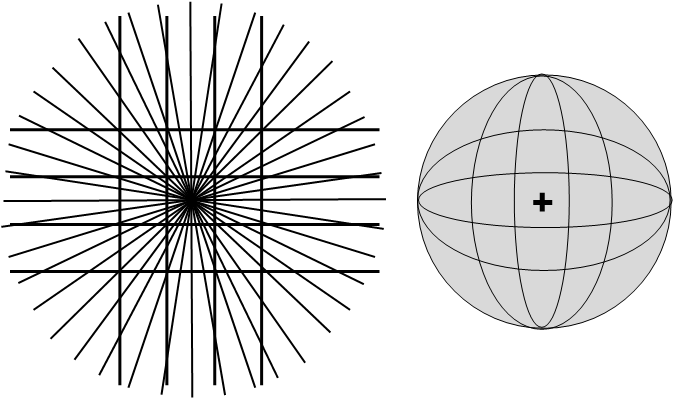 The set of directions from you to things in the world is a curved space. When you are far from horizontal and vertical lines in the world, as shown on the top left (fig. 2), the lines project toward you fairly straight in your visual field; the ball on the top right shows how the lines project toward you. (Imagine you’re standing at the center of the ball, and moving in the direction of the cross, the imaginary ball moving along with you everywhere you go.)

When you get closer, as shown on the bottom left (fig 2), the lines project toward you with much more of a spherically curved-space quality, as the ball on the bottom right shows. E.g., the separation between the vertical lines at the center are greater than at high or low elevations.  This shows that your visual field is inherently a spherically curved space. And the curviness of the visual field is more apparent when objects get nearer (and thus fill more of the visual field sphere). Why, then, do we experience the illusion in Figure 1? 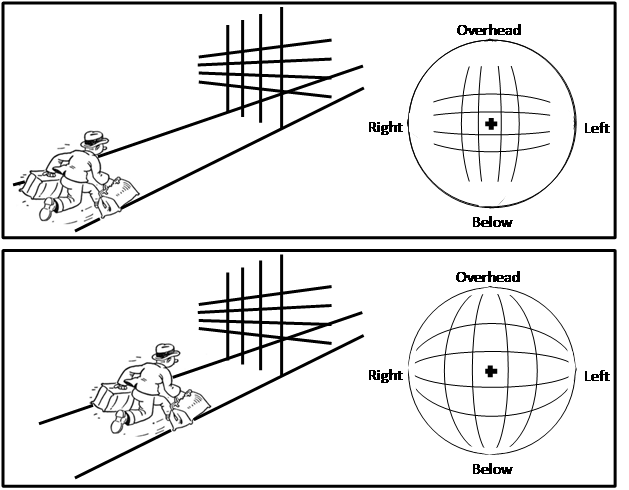 Converging lines look like optic streaks from forward movement. The photograph on the left (fig. 3) was taken in a car moving forward, and ends up with optic streaks with a vanishing point indicating the car’s heading. The middle figure illustrates the streaks as contours, and the right figure is an exaggeration of the streaks.

Our eye fixations in real life are a bit like snapshots of a camera, and when your eye is presented with these stimuli, it thinks you are actually moving toward the vanishing point of the converging lines. Recall that the illusion in Figure 1 had converging lines like this, leading one to wonder whether the illusion (the perceptual distortions of the horizontal and vertical lines) is due to the visual system mistakenly believing that you are moving forward.

Perceiving the present requires anticipating the next moment, and explains the illusion. Your brain would like to take the light that hits your eye and instantaneously create a perception. But it takes around a tenth of a second to create a perception, and by then a forward-moving observer has moved forward a little bit (as shown on the left), and the geometrical layout in one’s visual field has consequently changed (as shown in the middle).

Because of this eye-to-perception delay, you have evolved to build a perceptual guess of what will happen in the next moment, so that by the time that perception of the near-future is elicited, the future has arisen, and you thereby get a truthful perception of the present. When presented with a grid as shown in the upper right (fig. 4) but with converging lines overlaid as on the bottom right, your brain guesses it is moving toward the center, and so in the next moment the geometries of the grid will change to greater “display” their spherical curviness.

Your brain creates a perception of the geometries as they will distort in the next moment, and thus the illusion looks like the spherical space geometry in the middle bottom. It is an illusion here because you are not actually moving forward. In real life, though, you would typically encounter radial lines like that when you are moving forward, and the “illusion” would lead to correct perception. 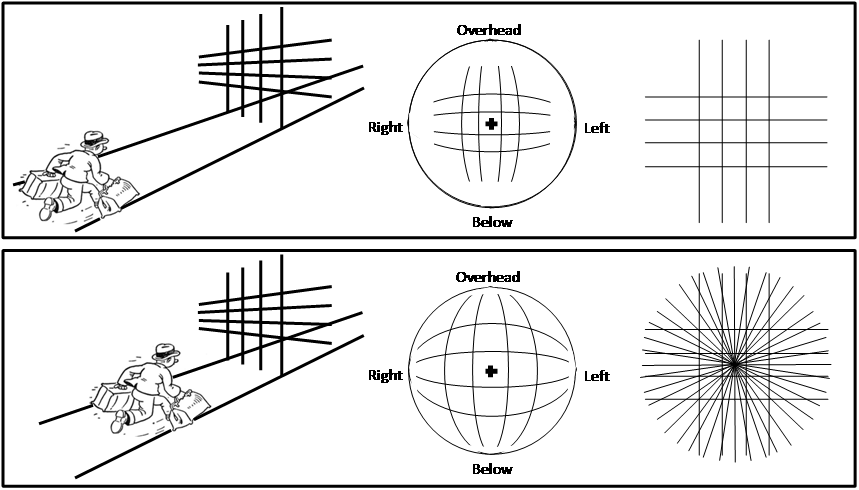 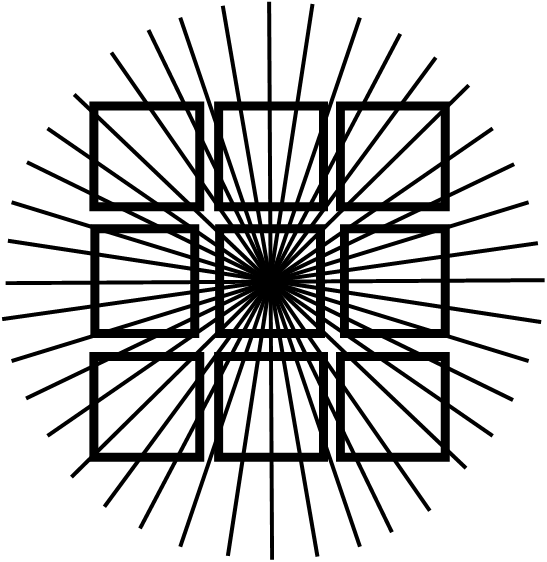 A dallop of non-Euclidean geometry, visual ecology, and future-seeing…and wallah, you have an explanation for the illusions.
Mark Changizi
More Articles All Articles
About