Theo Mertzimekis
Georgy Nikolaevich Flerov (1913-1990) is the father of the superheavy element production in the USSR (now Russia). Under his guidance scientists at the Flerov Nuclear Institute in Dubna were successful in synthesizing a significant number of heavy elements, non-existing in nature.

Elements with Z =102 (Nobelium), 103 (Lawrencium), 104 (Rutherfordium), 105 (Dubnium), 106 (Seaborgium), and 107 (Bohrium) were synthesized in Dubna JINR during G.N. Flerov's presence as director. Several decades later and after his walk to the other side, Flerov takes his prestigious place in the pantheon of physics and chemistry with an element (Z=114) named after him.

The periodic table welcomes Flerovium! The symbol for Flerovium is Fl

"IUPAC's recommendation for the new name of the element with atomic number 114 lies within tradition and honours the Flerov Laboratory of Nuclear Reactions where superheavy elements are synthesised. Georgiy N. Flerov (1913–1990) was a renowned physicist, author of the discovery of the spontaneous fission of uranium (1940, with Konstantin A. Petrzhak), pioneer in heavy-ion physics; and founder in the Joint Institute for Nuclear Research the Laboratory of Nuclear Reactions (1957)."
(From Chemistry International Vol. 34 No. 1, January-February 2012)

In the western hemisphere, Livermore is one of those modern era labs investing a lot of money and human effort on several research directions. One of these directions is superheavy elements investigation and production. In elements 114 and 116, Livermore collaborated closely with JINR, a fruitful collaboration that resulted in the discovery of those two elements. 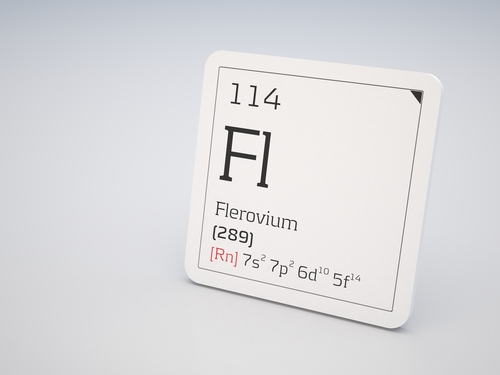 To honor this discovery, the element with 116 protons is named after Lawrence Livermore National Laboratory, features the symbol Lv and honors the link between two of the most important labs in the world.

The search for "fatter" elements is not recent and not over. Elements 118 and 114 were involved in one of the most peculiar stories of scientific discovery already back in 1999. Victor Ninov, a Bulgarian physicist working at Berkeley Lab was leading the effort to produce those elements. The announcement of the group's discovery of 118 and 114 during a nuclear structure Workshop at Yale in 1999 was the highlight of the workshop. However,  doubts were raised when the discovery could not be reproduced by other groups. A committee was formed to check the integrity of that finding, but instead they found that original data tapes were forged. As a consequence, the paper was retracted from the journal and a black spot in the history of superheavy elements hunting is hanging ever since.
Moment Zero
More Articles All Articles
About

Born in Greece some time ago, I liked smashing things so Nuclear Physics seemed a nice field to pursue a professional career in. I am currently a...