While scholars have put forth various assessments for the location of the Second Temple in Jerusalem, a Hebrew University of Jerusalem professor says that archaeological remains that have so far been ignored by scholars point to the exact location, which is in a spot that differs from prevailing opinion.

The location identified by Prof. Joseph Patrich of the Hebrew University Institute of Archaeology places the Temple and its corresponding courtyards, chambers and gates in a more southeasterly and diagonal frame of reference than have earlier scholars. 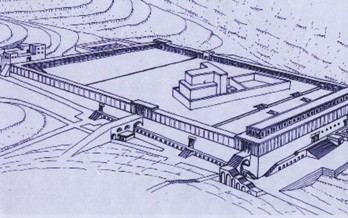 Drawing (Temple1) shows Prof. Patrich’s description of the location of the Temple compound (the rectangle defined by a solid line in the center of the drawing). (Drawings by Leen Ritmeyer)

In spotting the Temple in this way, Patrich concludes that the rock, over which the Dome of the Rock mosque was built in the 7th century C.E. is outside the confines of the Temple. The rock is considered by Moslems to be the spot from which Muhammad ascended to heaven and for Jews the place at which the binding of Isaac took place.

Patrich basis his proposal on a study of a large underground cistern on the Temple Mount that was mapped by British engineer Sir Charles Wilson in 1866 on behalf of the Palestine Exploration Fund.

The giant cistern, 4.5 meters wide and 54 meters long, lay near the southeastern corner of the upper platform of theTemple Mount. It had a southeasterly orientation with branches extending north and south

Examining the location and configuration of the cistern together with descriptions of the daily rite in the Temple and its surroundings found in the Mishna (the Rabbinic Oral Tradition compiled in the 3rd century C.E.), Patrich has demonstrated that this cistern is the only one found on the Temple Mount that can tie in with the Mishna text describing elements involved in the daily purification and sacrifical duties carried out by the priests on the altar in the Temple courtyard.

On this basis, he says, one can "reconstruct" the placement of the laver (a large basin) that was used by the priests for their ritual washing, with the water being drawn by a waterwheel mechanism from the cistern. After this purification, the priests ascended the nearby ramp to the sacrificial altar. By thus locating the laver, the water wheel, the ramp and the altar, one can then finally map, again in coordination with the Mishna, the alignment of the Temple itself and its gates and chambers.

All of these considerations have led Patrich to come up with a diagram of the Temple and its surroundings that place the Temple further to the east and south than earlier thought and at a southeasterly angle relative to the eastern wall of the Temple Mount, and not perpendicular to it as earlier assumed. It is this placement which also leaves the Dome of the Rock outside of the Temple confines (see attached drawings).

Prof. Patrich stressed that his research concerning the location of the Temple is strictly academic in nature, and that political connotations should not be attributed to it.

Note: This article has been adapted from a news release issued by The Hebrew University of Jerusalem.