News Staff
The earliest known Hebrew text written in a Proto-Canaanite script has been discovered by Hebrew University archaeologists in an ancient city in the area where David slew Goliath – the earliest Judean city found to date. The 3,000 year old finding is thought to be the most significant archaeological discovery in Israel since the Dead Sea Scrolls – predating them by 1,000 years.

The ostracon (pottery shard inscribed with writing in ink) comprises five lines of text divided by black lines and measures 15 x 15 cm. and was found at excavations of a 10th century B.C.E. fortress - the oldest known Judaic city.

The ostracon was found lying on the floor inside a building near the city gate of the site, known as the Elah Fortress at Khirbet Qeiyafa. 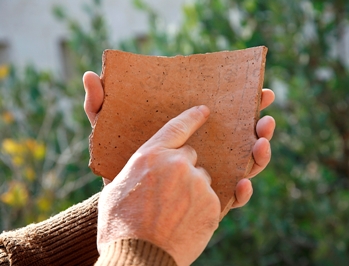 The ostracon comprises five lines of text divided by black lines, and was found at excavations of a 10th century B.C.E. fortress - the oldest known Judaic city. Photo: Gabi Laron

Excavations are being led by Prof. Yosef Garfinkel, the Yigal Yadin Professor of Archaeology at the Institute of Archaeology at the Hebrew University of Jerusalem and his partner Saar Ganur, in partnership with Foundation Stone, a non-profit educational organization which works to provide a contemporary voice to ancient stories. The excavations and analysis are also being supported by J.B. Silver and the Brennan Foundation.

Why is this inscription special?

Carbon-14 dating of organic material found with the ostracon, administered by Oxford University, along with pottery analysis dates this inscription to the time of King David ca. 3,000 years ago – predating the Dead Sea Scrolls by approximately a millennium, and placing it earlier than the famed Gezer Calendar.

It is hoped the text inscribed on the 'Qeiyafa Ostracon' will serve as an anchor in our understanding of the development of all alphabetic scripts.

While the inscription has yet to be deciphered, initial interpretation indicates the text was part of a letter and contains the roots of the words "judge", "slave" and "king". This may indicate that this is a legal text that could provide insights into Hebrew law, society and beliefs. Archaeologists say that it was clearly written as a deliberate message by a trained scribe.

What is the Elah Fortress?

Dating to the 10th century B.C.E., the Elah Fortress is the earliest known fortified city of the biblical period in Israel. Excavations began on the site in June 2008.

Comprising 23 dunams [2.3 hectares], the Elah Fortress (Khirbet Qeiyafa) was situated on the border between Philistia and the Kingdom of Judea (5 kilometers south of current day Bet Shemesh.). It is thought to have been a major strategic checkpoint guarding the main road from Philistia and the Coastal Plain to Jerusalem, which was just a day's walk away.

Nearly 600 square meters of the Elah Fortress have so far been unearthed. Surrounded by a 700 meter-long massive city wall, the fortress was built with megalithic stones - some weighing four to five tons. The city wall is four meters wide, constructed with casemates. Archaeologists estimate that 200,000 tons of rock were hewn, moved and used in the construction of these fortifications.

A four-chambered gate, 10.5 meters across, is the dominant feature of the massive fortifications. Further excavations will reveal whether it is really six chambers and whether there are other gates. The larger rocks in the gate structure weigh five to eight tons.

To date, only four percent of the site has been excavated, promising many more incredible discoveries in the remaining 96 percent in the future.

The early Hebrew ostracon, Judean pottery similar to that found at other Israelite settlements, and the absence of pig bones among the animal bones found at the site all point to this fortress being a city of the Kingdom of Judea.

The Elah Fortress archaeological site could prove the existence of the United Monarchy, which scholars often question ever existed. The artifacts found at the site thus far all indicate that there was most likely a strong king and central government in Jerusalem - earlier than any discovered until now - rather than a number of small villages scattered throughout Judea. This would verify descriptions and narratives found in Samuel and Chronicles.

Over 100 jar handles bear distinct impressions which may indicate a link to royal vessels. Such a large quantity of this feature found in one small locale is unprecedented.

The site of Khirbet Qeiyafa is situated among four biblical cities in Judea's inheritance chronicled in the Book of Joshua 35:15 - Azeka, Socho, Yarmut and Adulam. The biblical narrative located the battle between David and Goliath between Socho and Azeka. According to legend, David selected five stones from the nearby Elah Creek with which to slay Goliath.

According to Prof. Garfinkel, this is the only site in Israel where one can investigate the historical King David. "The chronology and geography of Khirbet Qeiyafa create a unique meeting point between the mythology, history, historiography and archaeology of Kind David."