A study at UCL (University College London) finds that a high-prevalence of male-killing bacteria active in many species of insect including the butterfly, actually increases female promiscuity and male fatigue. 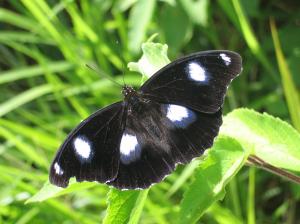 The study was carried out on Hypolimnas bolina butterflies in Pacific Island and South-East Asian populations. The islands provide an ideal location because every island is differently affected by the male-killling bacteria so that each has a different ratio of males to females. (Photo Credit: Sylvain Charlat, UCL)

The team found that when the male insect population drops -- killed off by the bacteria -- the female butterfly becomes more sexually rampant. Males on the other hand show signs of fatigue and put less effort into mating.

In some populations of tropical butterfly the entire mating system is determined by a group of bacteria known as Wolbachia, according to the study, published in the journal 'Current Biology'.

Dr Sylvain Charlat, of the UCL Department of Biology, who led the study, said: "Male-killling bacteria are found in many insect species including the British ladybird. We wanted to know what the effect of the bacteria is on the mating system, and here we've shown that butterfly mating patterns are strongly determined by the killer bacteria.

"Contrary to expectation, we also find that female promiscuity actually rises when male numbers are reduced. Greater numbers of female partners leads to fatigue in males. They start producing smaller sperm packages. Unfortunately, the female butterflies instinctively know that the packages are smaller and that their chances of having been impregnated after mating are lower than usual. This just makes them more rampant!"

The male-killling bacterium is transmitted from mother to son and actually kills the son before the embryo hatches into a caterpillar. Only female offspring of female carriers of the bacteria can survive, which can lead to the male population being as low as one male to every hundred females in some areas.

Dr Greg Hurst, of the UCL Department of Biology and a senior author of the study, said: "It's amazing that the numbers of male butterflies can get so low and yet the population is still sustainable and stable. You don't need many male butterflies to continue the population successfully. This is partly because the decision to mate is mainly under female control and because males have a high mating capacity."

This study was carried out on Hypolimnas bolina butterflies in Pacific Island and South-East Asian populations. The islands provide an ideal location because every island is differently affected by the male-killling bacteria so that each has a different ratio of males to females.

The male-killling phenomenon in this species was first identified in 1920 by Hubert Simmonds but has not received much attention until now. This finding is significant for the scientific community because it demonstrates how a species' mating system can be determined by the frequency of a parasite.

Note: This article has been adapted from a news release issued by University College London.