A giant cloud half the size of the United States has been imaged on Saturn’s moon Titan by the Cassini spacecraft. The cloud may be responsible for the material that fills the lakes discovered last year by Cassini's radar instrument.

Cloaked by winter's shadow, this cloud has now come into view as winter turns to spring. The cloud extends down to 60 degrees north latitude, is roughly 2400 kilometers in diameter and engulfs almost the entire north pole of Titan.

The new image was acquired on 29 December 2006, by Cassini's visual and infrared mapping spectrometer (VIMS). Scientific models predicted this cloud system but it had never been imaged with such details before. 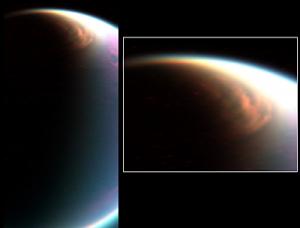 Cassini's visual and infrared mapping spectrometer (VIMS) has imaged a huge cloud system covering the north pole of Titan. This composite image shows the cloud, imaged at a distance of 90 000 kilometers during a 29 December 2006 flyby designed to observe the limb of the moon. (Credits: NASA/JPL/University of Arizona)

"We knew this cloud had to be there but were amazed at its size and structure," said Dr. Christophe Sotin of the University of Nantes, France, a member of the visual and infrared mapping spectrometer team and distinguished visiting scientist at NASA's Jet Propulsion Laboratory, Pasadena, California. "This cloud system may be a key element in the global formation of organics and their interaction with the surface."

The same cloud system seen on 29 December 2006, was still there two weeks later during the flyby which took place on 13 January 2007, even though observing conditions were slightly less favorable than in December.

The Cassini radar team reported last year that the lakes at the north pole are partly filled and some appear to have evaporated, likely contributing to this cloud formation, which is made up of ethane, methane and other organics.

These findings reinforce the idea that methane rains down onto the surface to form lakes, and then evaporates to form clouds. Scientists compare this methane cycle to the hydrological cycle on Earth, dubbing it 'methane-ologic cycle'.

Ground-based observations show this Titan cloud system comes and goes with the seasons. A season on Titan lasts approximately seven Earth years. Based on the global circulation models, it seems that such cloud activity can last about 25 Earth years before almost vanishing for four to five years, and then appearing again for 25 years.

"With 16 more flybys to come this year, we should have the opportunity to monitor the evolution of this cloud system over time," said Dr. Stephane Le Mouelic, working with the Cassini visual and infrared mapping spectrometer team, and also at the University of Nantes.

The Cassini-Huygens mission is a cooperative project of NASA, the European Space Agency and the Italian Space Agency. The visual and infrared mapping spectrometer team is based at the University of Arizona, Tucson, and counts a number of scientists across Europe.

Note: This article has been adapted from a news release issued by European Space Agency.