Chemists at UCLA have designed new organic structures for the storage of voluminous amounts of gases for use in alternative energy technologies.

The research, to be published on April 13 in the journal Science, demonstrates how the design principles of reticular chemistry have been used to create three-dimensional covalent organic frameworks, which are entirely constructed from strong covalent bonds and have high thermal stability, high surface areas and extremely low densities. 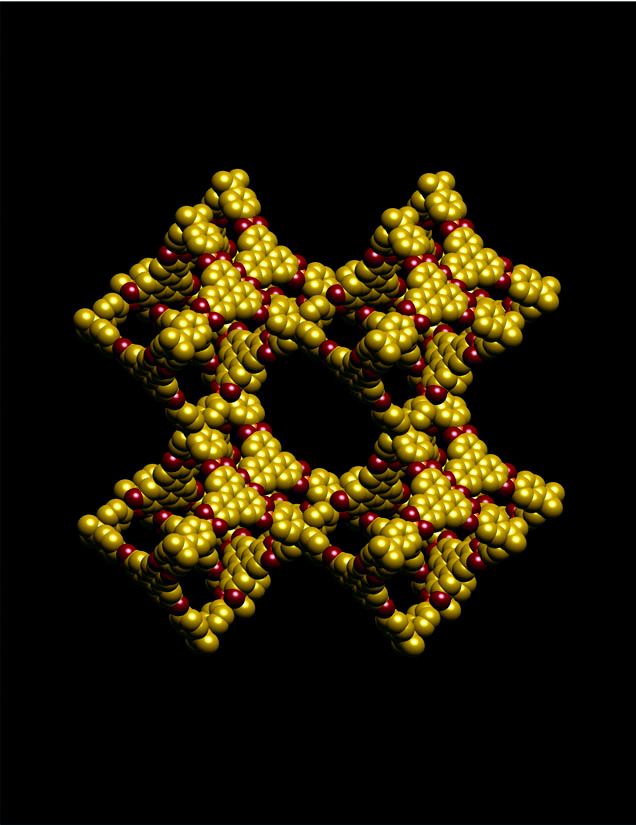 The team of researchers comprises chemists from the Center for Reticular Chemistry at UCLA’s California NanoSystems Institute and the departments of chemistry and biochemistry at UCLA.

Led by Omar Yaghi, UCLA professor of chemistry and biochemistry, the team has developed a class of materials in which components can be changed nearly at will. Reticular chemistry, the brainchild of Yaghi, is the chemistry of linking molecular building blocks by strong bonds into predetermined structures. The principles of reticular chemistry and the ability to construct chemical structures from these molecular building blocks has led to the creation of new classes of materials of exceptional variety.

The covalent organic frameworks, or COFs (pronounced "coffs"), one of these new classes of materials, are the first crystalline porous organic networks. A member of this series, COF-108, has the lowest density reported of any crystalline material.

"These are the first materials ever made in which the organic building blocks are linked by strong bonds to make covalent organic frameworks," Yaghi said. "The key is that COFs are composed of light elements, such as boron, carbon and oxygen, which provide thermal stability and great functionality."

COF-108, the latest advance in reticular chemistry development, has a high surface area, with more than 4,500 meters per gram. "One gram, unraveled, could cover the surface area of approximately 30 tennis courts," Yaghi said.

In the push to develop methods to control greenhouse gas emissions, some of the biggest challenges have been finding ways to store hydrogen for use as a fuel, to use methane as an alternative fuel, and to capture and store carbon dioxide from power plant smokestacks before it reaches the atmosphere. Yaghi and his colleagues believe COFs are uniquely suited for all these applications because of their functional flexibility and their extremely light weight and high porosity.

Through reticular chemistry, Yaghi has developed a process whereby it is possible to utilize the arsenal of organic building blocks to construct a large number of new COF structures whose components can be easily designed to suit a particular application. The pore size and pore functionality of these materials can be varied at will.

Yaghi, whose research overlaps chemistry, materials science and engineering, is a member of the California NanoSystems Institute (CNSI) at UCLA, which encourages cross-disciplinary collaboration to solve problems in nanoscience and nanotechnology. Yaghi is also the director of the Center for Reticular Chemistry at the CNSI.

"I have long been interested in making materials in a rational way," Yaghi said. "At the beginning of my career, I always thought it should be possible to create a predetermined chemical structure by linking together well-defined molecules as building blocks, just as an architect creates a blueprint prior to construction on buildings."

A year ago, Yaghi made national headlines when he and his team at UCLA, along with colleagues at the University of Michigan, conducted research that could lead to a hydrogen fuel that powers not only cars but laptop computers, cellular phones, digital cameras and other electronic devices. The findings were reported in the Journal of the American Chemical Society in March 2006.

The materials used in that research, invented by Yaghi in the early 1990s, are called metal-organic frameworks, or MOFs, which have been described as crystal sponges. These frameworks have nanoscale-size openings, or pores, in which Yaghi and his colleagues can store gases — such as hydrogen and methane — that are generally difficult to store and transport.

BASF, a global chemical company based in Germany, has licensed the technology and is moving forward on commercialization of MOFs.

In the fall of 2006, Yaghi was named one of the "Brilliant 10" by Popular Science magazine, which described him as a "hydrogen nano-architect" whose "research papers rank among the most influential in his field." At the age of 42, Yaghi is already ranked No. 22 on the list of the Top 100 most-cited chemists by Thomson Scientific.