Using corncob waste as a starting material, researchers have created carbon briquettes with complex nanopores capable of storing natural gas at an unprecedented density of 180 times their own volume and at one seventh the pressure of conventional natural gas tanks.

The breakthrough, announced today in Kansas City, Mo., is a significant step forward in the nationwide effort to fit more automobiles to run on methane, an abundant fuel that is domestically produced and cleaner burning than gasoline. 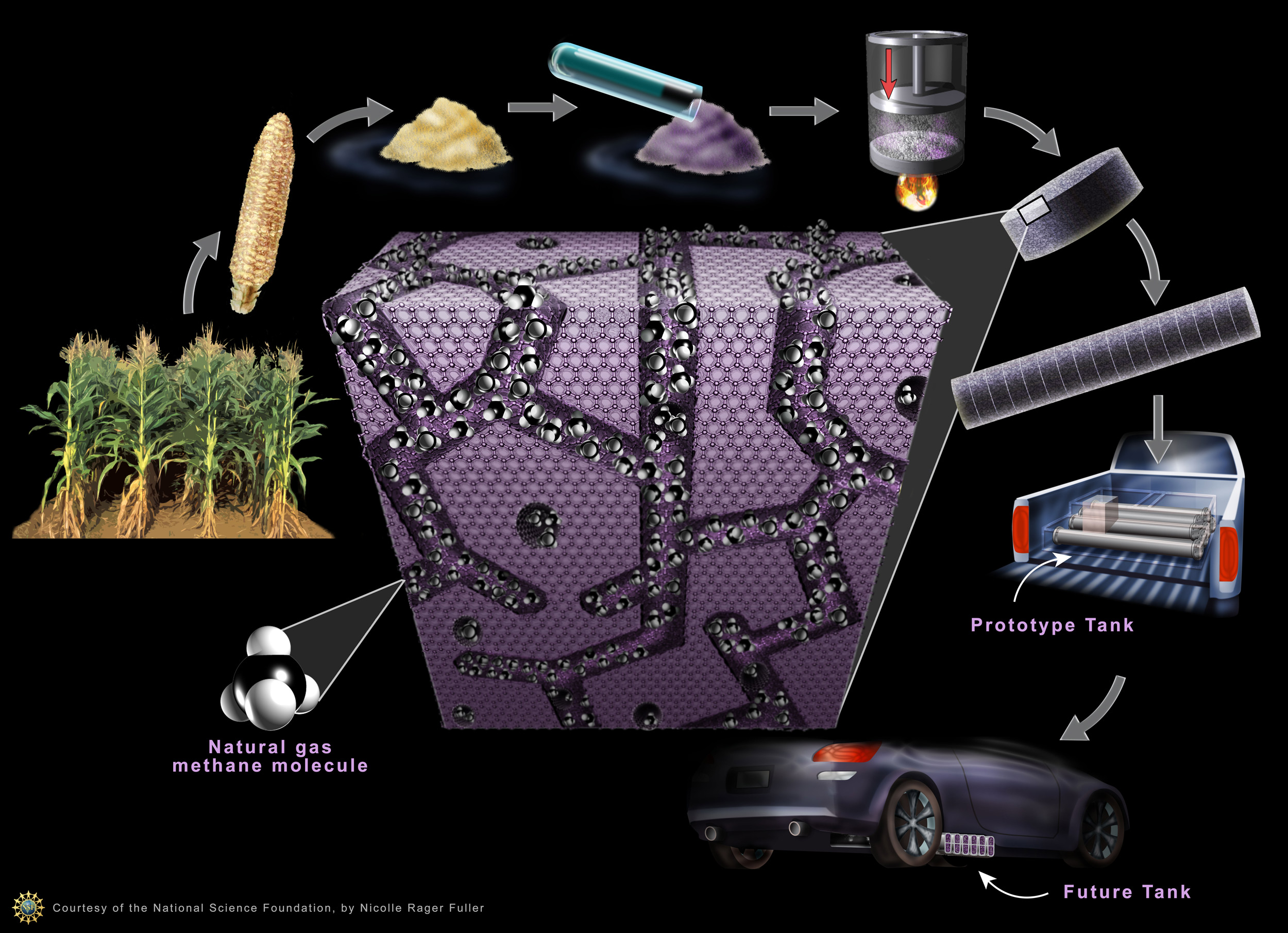 Researchers at the University of Missouri-Columbia and the Midwest Research Institute in Kansas City have developed a method to convert corncob waste into a carbon "sponge" with nanoscale pores. The new material can store large quantities of natural gas and can be formed into a variety of shapes, ideal characteristics for next-generation gas storage tanks on methane-powered automobiles. Credit: Nicolle Rager Fuller, National Science Foundation

Supported by the National Science Foundation (NSF) Partnership for Innovation program, researchers at the University of Missouri-Columbia (MU) and Midwest Research Institute (MRI) in Kansas City developed the technology. The technology has been incorporated into a test bed installed on a pickup truck used regularly by the Kansas City Office of Environmental Quality.

The briquettes are the first technology to meet the 180 to 1 storage to volume target set by the U.S. Department of Energy in 2000, a long-term goal of principal project leader Peter Pfeifer of MU.

"We are very excited about this breakthrough because it may lead to a flat and compact tank that would fit under the floor of a passenger car, similar to current gasoline tanks," said Pfeifer. "Such a technology would make natural gas a widely attractive alternative fuel for everyone."

According to Pfeifer, the absence of such a flatbed tank has been the principal reason why natural gas, which costs significantly less than gasoline and diesel and burns more cleanly, is not yet widely used as a fuel for vehicles.

Standard natural gas storage systems use high-pressure natural gas that has been compressed to a pressure of 3600 pounds per square inch and bulky tanks that can take up the space of an entire car trunk. The carbon briquettes contain networks of pores and channels that can hold methane at a high density without the cost of extreme compression, ultimately storing the fuel at a pressure of only 500 pounds per square inch, the pressure found in natural gas pipelines.

The low pressure of 500 pounds per square inch is central for crafting the tank into any desired shape, so ultimately, fuel storage tanks could be thin-walled, slim, rectangular structures affixed to the underside of the car, not taking up room in the vehicle.

Pfeifer and his colleagues at MU and MRI discovered that that fractal pore spaces (spaces created by repetition of similar patterns at different scales) are remarkably efficient at storing natural gas.

"Our project is the first time a carbon storage material has been made from corncobs, an abundantly available waste product in the Midwest," said Pfeifer. "The carbon briquettes are made from the cobs that remain after the kernels have been harvested. The state of Missouri alone could supply the raw material for more than 10 million cars per year. It would be a unique opportunity to bring corn to the market for alternative fuels--corn kernels for ethanol production, and corncob for natural gas tanks."

The test pickup truck, part of a fleet of more than 200 natural gas vehicles operated by Kansas City, has been in use since mid-October and the researchers are monitoring the technology's performance, from mileage data to measurements of the stability of the briquettes.

In addition to efforts to commercialize the technology, the researchers are now focusing on the next generation briquette, one that will store more natural gas and cost less to produce. Pfeifer believes this next generation of briquette might even hold promise for storing hydrogen.

Written from a news release issued by National Science Foundation.br>