A greenhouse gas that has become the bane of modern society may have saved Earth from completely freezing over early in the planet's history, according to the first detailed laboratory analysis of the world's oldest sedimentary rocks.

Scientists have for years theorized that high concentrations of greenhouse gases could have helped Earth avoid global freezing in its youth by allowing the atmosphere to retain more heat than it lost. A team at the University of Chicago and the University of Colorado has now analyzed ancient rocks from the eastern shore of Hudson Bay in northern Quebec, Canada, which has yielded the first preliminary field evidence supporting this theory. 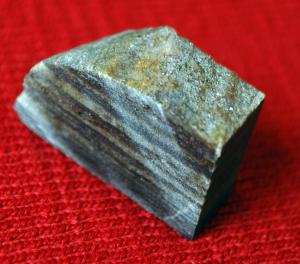 A rock from a banded iron formation in northern Quebec, Canada. The bands vary in thickness from approximately 10 microns (less than the width of a human hair), to 10 meters (30 feet). This sample is measures a few inches across. At 3.75 billion years of age, it is one of the oldest rocks on Earth. "These rocks, with meteorites, are the only time travel machines into the early history of our planet," said University of Chicago geoscientist Nicolas Dauphas. (Credit: Photo by Dan Dry)

"Our study shows the greenhouse gas that could have sustained surface temperatures above freezing 3.75 billion years ago may have been carbon dioxide," said Nicolas Dauphas, Assistant Professor in Geophysical Sciences at the University of Chicago. Dauphas and his co-authors, Nicole Cates and Stephen Mojzsis of the University of Colorado, and Vincent Busigny, now of the Institut de Physique du Globe in Paris, present their data in the Feb. 28 issue of the journal Earth and Planetary Science Letters.

In a companion article in the same issue of the journal, Cates and Mojzsis establish with certainty the antiquity of the rocks and discuss their origin in a wider context.

The study led by Dauphas helps explain how the Earth may have avoided becoming frozen solid early in its history, when astrophysicists believe the sun was 25 percent fainter than today. Previous studies had shown that liquid water existed at the Earth's surface even though the weak sun should have been unable to warm the Earth above freezing conditions. But high concentrations of carbon dioxide or methane could have warmed the planet.

Discovered in 2001 by a team of Canadian scientists, the Quebec rocks are among the oldest-known in Earth's 4.5-billion-year history. Slow-acting geologic processes destroy and recycle the Earth's crust on vast time scales, leaving only scraps of land containing remains of the planet's oldest rock.

The only other outcropping of rocks that are about as old occur in western Greenland. Scientists have studied those rocks exhaustively for more than three decades. But the limited extent of the rocks of this antiquity may have provided only a biased view of the early Earth, Dauphas said.

Mojzsis and Cates revisited the Canadian site to pursue new but as yet unrealized opportunities for analysis and comparison. Today Mojzsis describes the area as a landscape of rolling hills of grass and marsh, punctuated by lakes, streams and craggy rock outcroppings. Stunted trees of willow grow no more than six feet high, leaving unobstructed views all around.

"It is a grand landscape of water, wind and rock carved by glaciers and only lightly touched by the people who live there," Mojzsis said. But the region would have looked much different 3.8 billion years ago.

"At that time it would have appeared to be a totally alien world to us, with a dense atmosphere of carbon dioxide and methane that would have imparted a reddish cast to the sky, and deep dark greenish-blue oceans of iron-rich water washing onto beaches of small continents scattered across the globe," Mojzsis said.

The Chicago-Colorado scientists focused their analysis on rocks they suspected contained chemical sediments that precipitate like salt from seawater. "A critical issue with these rocks is that they have been cooked and deformed during burial in the crust for several hundred million years, which makes it difficult to identify their nature," Dauphas said.

First they dissolved the rock, separating iron oxides and iron carbonates from other constituents. Then they used a mass spectrometer to measure the isotopic composition of the iron. All iron atoms have 26 protons at their core, but they can be accompanied by a varying number of more numerous neutrons.

"Iron has several isotopes, and the ratio of these isotopes changes from one to another," Dauphas explained. "Sediments that formed by precipitation from seawater have a very distinct signature of iron isotopes." When the Chicago scientists analyzed the iron composition of the rocks, "We found that indeed they had the typical signature of something that formed by precipitation in a marine setting."

The iron probably was released with other metals in hydrothermal vents called black smokers found along mid-ocean ridges, where molten lava emerges on the sea floor to create new oceanic crust. In today's oxygen-rich oceans, the iron rapidly precipitates and concentrates near these vents. But in the oxygen-starved oceans of 3.8 billion years ago, oceanic currents could transport the iron long distances before becoming partially oxidized and deposited in sea-floor sediments.

Previous research on the rocks from Greenland had already revealed the existence of ocean water at that early stage in Earth history, known as the Precambrian Period. But the Canadian rocks showed something else: the first hints that Precambrian oceans also contained iron carbonates. Iron carbonates can only form in an atmosphere that contains far higher levels of carbon dioxide than are found in Earth's atmosphere today, Dauphas said. This carbon dioxide would have played an important role as a planetary thermostat in the support of life on Earth.

"If it gets cold, ice caps form, chemical weathering decreases, carbon dioxide accumulates in the atmosphere, which increases the greenhouse effect and surface temperatures. If it gets hot, the rate of chemical weathering increases, the rate of burial of sedimentary carbonates increases, the amount of carbon dioxide in the atmosphere and surface temperatures decrease," Dauphas said.

Other factors are involved in this simplified scheme. "Still, it is possible that such a thermostat was at work as early as 3.75 billion years ago," he said.

Note: This article has been adapted from a news release issued by University of Chicago.