NASA satellite data have helped scientists solve a decades-old puzzle about how vast blooms of microscopic plants can form in the middle of otherwise barren mid-ocean regions. A research team led by the Woods Hole Oceanographic Institution, Woods Hole, Mass., has used the data in its work to show that episodic, swirling current systems known as eddies act to pump nutrients up from the deep ocean to fuel such blooms.

Dennis McGillicuddy, a Woods Hole oceanographer and leader of the Eddies Dynamics, Mixing, Export, and Species composition (EDDIES) project, found that ocean productivity was surprisingly high when stirred by certain types of mid-ocean eddies. These huge parcels of water were teeming with diatoms - a type of phytoplankton - in concentrations 10,000 to 100,000 times the norm, among the highest ever observed in the Sargasso Sea. 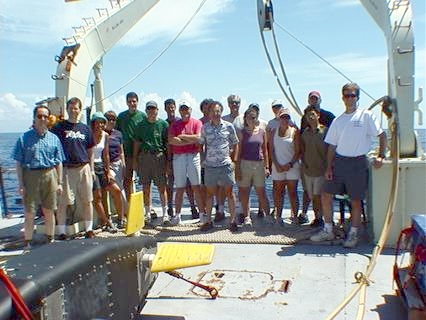 "Past research has shown that the open ocean is far more productive than we could explain based on what we knew about nutrients in the surface water," said McGillicuddy. "Scientists have been trying to figure out where the nutrients come from to make these oases in the oceanic desert, and some of us hypothesized that eddies were part of the answer. The EDDIES project has validated that suspicion."

The Sargasso Sea, like other mid-ocean regions of the world, is warmer, saltier, bluer and clearer than most other parts of the North Atlantic. The prevailing oceanographic wisdom has suggested that such open waters were mostly desert-like, unproductive regions populated by smaller plant species. Yet observations showed oxygen and other biologically important elements being consumed at a higher rate than the theories and models could account for. Scientists believed there had to be some natural nutrient source.

McGillicuddy and his colleagues found that eddy-driven nutrient transport actually primes the ocean's "biological pump," fertilizing the waters with nutrients from the deep. Fed by this unusual upwelling, the phytoplankton population greatly increases and, in turn, attracts more zooplankton and other animals higher up the food chain. The fate of all of that biomass also is important, as plankton blooms can remove substantial amounts of carbon dioxide from surface waters and sink it to the deep ocean. The plants in the bloom either die and sink when the bloom runs its course or are consumed by animals, which then make fecal pellets that drop to the sea floor.

"Eddies are the internal weather of the sea," said McGillicuddy, "the oceanic equivalent of storms in the atmosphere." The largest eddies can contain up to 1,200 cubic miles of water and can last from months to a year.

These distinct parcels of water are formed by differences in ocean temperature and salinity that give water different densities. On a rotating planet, these different water masses tend to dance around one another rather than mix. The density inside an eddy can be higher or lower than the surrounding water, like high and low-pressure systems in the atmosphere. The balance pressure differences and Earth's rotation give eddy currents their distinctive clockwise or counterclockwise spin. The direction of the spin depends on whether the eddy contains a cooler or a warmer core.

Working from a long-debated but mostly untested hypothesis, EDDIES investigators measured how these swirling currents can perturb the layers of the ocean and cause an upwelling of nutrient-rich water into the sunlit "euphotic" zone - the top 330 feet that light penetrates.

In nearly six months of ship-based work in the summers of 2004 and 2005, the researchers employed a combination of remote sensing, video plankton recorders, ocean drifters, tracers and traditional measurements of water properties and current speeds.

The team started with NASA satellite measurements of sea surface height to locate eddies in the Sargasso Sea, south and east of the Gulf Stream in the North Atlantic.