Many earthquakes in the deep ocean are much smaller in magnitude than expected. Geophysicists from the Woods Hole Oceanographic Institution have found new evidence that the fragmented structure of seafloor faults, along with previously unrecognized volcanic activity, may be dampening the effects of these quakes.

Examining data from 19 locations in the Atlantic, Pacific, and Indian oceans, researchers led by graduate student Patricia Gregg have found that “transform” faults are not developing or behaving as plate tectonic theory says they should. Rather than stretching as long, continuous fault lines across the seafloor, the faults are often segmented and show signs of recent or ongoing volcanism. Both phenomena appear to prevent earthquakes from spreading across the seafloor, thus reducing their magnitude and impact. 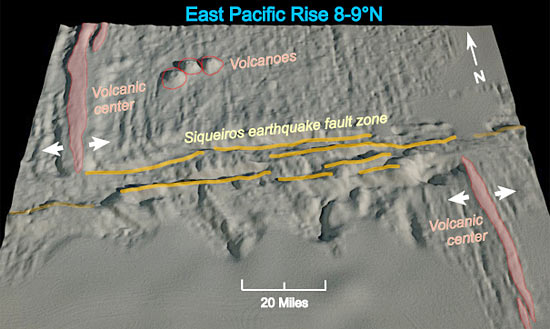 Oceanic transform faults cut across the mid-ocean ridge system, the 40,000-mile-long mountainous seam in Earth’s crust that marks the edges of the planet’s tectonic plates. Along some plate boundaries, such as the Mid-Atlantic Ridge, new crust is formed. In other regions, such as the western Pacific, old crust is driven back down into the Earth.

If you imagine the mid-ocean ridge as the seams on a baseball, then transform faults are the red stitches, lying mostly perpendicular to the ridge. These faults help accommodate the motion and geometry of Earth’s tectonic plates, cracking at the edges as the different pieces of rocky crust slip past each other.

The largest earthquakes at mid-ocean ridges tend to occur at transform faults. Yet while studying seafloor faults along the fast-spreading East Pacific Rise, Gregg and colleagues found that earthquakes were not as large in magnitude or resonating as much energy as they ought to, given the length of these faults.

The researchers decided to examine gravity data collected over three decades by ships and satellites, along with bathymetry maps of the seafloor. Conventional wisdom has held that transform faults should contain rocks that are colder, denser, and heavier than the new crust being formed at the mid-ocean ridge. Such colder and more brittle rocks should have a “positive gravity anomaly”; that is, the faults should exert a stronger gravitational pull than surrounding seafloor region. By contrast, the mid-ocean ridge should have a lesser gravity field, because the crust (which is lighter than underlying mantle rocks) is thicker along the ridge and the newer, molten rock is less dense.

But when Gregg examined gravity measurements from the East Pacific Rise and other fast-slipping transform faults, she was surprised to find that the faults were not exerting extra gravitational pull. On the contrary, many seemed to have lighter rock within and beneath the faults.

“A lot of the classic characteristics of transform faults didn’t make sense in light of what we were seeing,” said Gregg. “What we found was the complete opposite of the predictions.”

The researchers believe that many of the transform fault lines on the ocean floor are not as continuous as they first appear from low-resolution maps. Instead these fault lines are fragmented into smaller pieces. Such fragmented structure makes the length of any given earthquake rupture on the seafloor shorter—giving the earthquake less distance to travel along the surface.

It is also possible that magma, or molten rock, from inside the earth is rising up beneath the faults. Earthquakes stem from the buildup of friction between brittle rock in Earth’s plates and faults. Hot rock is more ductile and malleable, dampening the strains and jolts as the crust rubs together and serving as a sort of geological lubricant.

“What we learn about these faults and earthquakes underwater could help us understand land-based faults such as the San Andreas in California or the Great Rift in eastern Africa,” said Lin, a WHOI senior scientist and expert on seafloor earthquakes. “In areas where you have strike-slip faults, you might have smaller earthquakes when there is more magma and warmer, softer rock under the fault area.”

The findings by Gregg, Lin, and colleagues may also have implications for understanding the theory of plate tectonics, which says that new crust is only formed at mid-ocean ridges. By traditional definitions, no crust can be created or destroyed at a transform fault. The new study raises the possibility that new crust may be forming along these faults and fractures at fast-spreading ridges such as the East Pacific Rise.

“Our understanding of how transform faults behave must be reevaluated,” said Gregg. “There is a discrepancy that needs to be addressed.”