News Staff
There are lots of paradoxes in nature but one - how earthquakes along mid-ocean ridges are linked with low tides - may have revealed a mechanism.

The mechanism is the magma below the mid-ocean ridges.

"It's the magma chamber breathing, expanding and contracting due to the tides, that's making the faults move," says Christopher Scholz, a seismologist at Columbia University's Lamont-Doherty Earth Observatory.

Low tide correlation to earthquakes is surprising because of the way the mid-ocean fault moves. The fault as a tilted plane that separates two blocks of earth. During movement, the upper block slides down with respect to the lower one.

It would follow that at high tides, when there is more water sitting on top of the fault, it would push the upper block down and cause the earthquakes. But that's not what happens. Instead, the fault slips down during low tide, when forces are actually pulling upwards --  the opposite of what you'd expect. 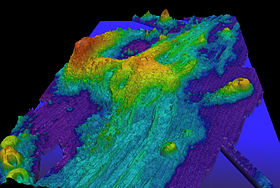 The Axial Volcano along the Juan de Fuca Ridge in the Pacific Ocean to the rescue. Axial erupts around every ten years so scientists have set up dense networks of ocean bottom instruments to monitor it. The team behind the new paper used the data from those instruments to model and explore different ways the low tides could be causing the tremors. Tidal earthquakes in this region are so sensitive that when the team charted the earthquake rate versus the stress on the fault, they realized that even the tiniest stress could trigger an earthquake. 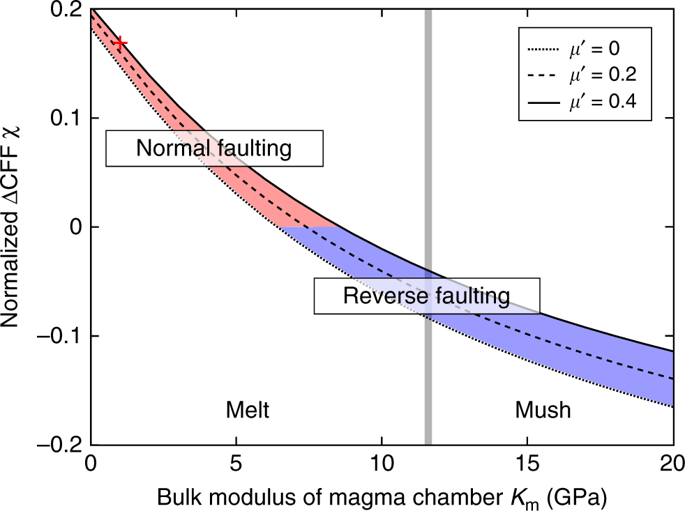 Properties of the magma chamber deformation system. The vertical axis χ is the average ΔCFS on a 67° dipping normal fault from the tip of the magma chamber to the surface (bold line in Fig. 3b) resulting from an applied vertical tidal stress, normalized by that stress. The red area defines the conditions in which low tides encourage seismicity on normal faults and high tides discourage it, and the blue area vice versa. The plus sign indicates the conditions shown in Fig. 3b

The tidal data helped to calibrate this effect, but the triggering stress could be caused by anything -- such as the seismic waves from another earthquake. They even suggest fracking could cause it, which is perhaps their way to try and generate media buzz but scientifically is more in line with claims an American politician made that more soldiers on Guam would cause the island to flip or another politician claiming natural gas extraction would cause earth to deflate.

In reality, a small stress over a small area isn't going to cause a devastating earthquake. But the suggestion about fracking may be enough to get Washington Post to cover their study.

Instead, the culprit was the volcano's magma chamber, a soft, pressurized pocket below the surface. The team realized that when the tide is low, there is less water sitting on top of the chamber, so it expands. As it puffs up, it strains the rocks around it, forcing the lower block to slide up the fault, and causing earthquakes in the process.
News Articles
More Articles All Articles
About