The largest climate change in central North America since the age of the dinosaurs 65 million years ago, a temperature drop of nearly 15 degrees Fahrenheit, is documented within the fossilized teeth of horses and other plant-eating mammals, a new study reveals.

The overwhelming majority of previous climate-change studies on the 400,000-year transition from the Eocene to the Oligocene epochs, about 33.5 million years ago, focus on marine environments, but University of Florida vertebrate paleontologist Bruce MacFadden and his colleagues turned their attention to fossils from the Great Plains. 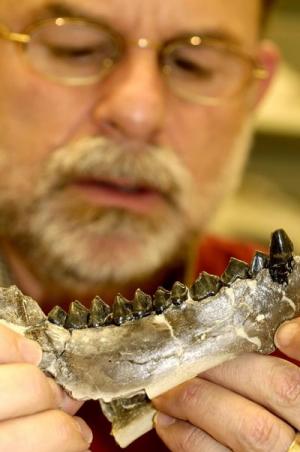 University of Florida vertebrate paleontologist Bruce MacFadden examines a fossil oreodont jaw from Nebraska in the Florida Museum of Natural History collections in Gainesville, Fla., on Jan. 30, 2007. MacFadden is part of a team that is the first to use fossil teeth and bones to provide evidence of a dramatic climate change about 33.5 million years ago. (Photo by Jeff Gage/Florida Museum of Natural History)

The study will be published online Feb. 7 in the journal Nature and will appear in the Feb. 8 print edition.

"If a temperature change of this magnitude occurred today, Florida would have weather similar to Washington, D.C., or even farther north," said MacFadden, a curator at the Florida Museum of Natural History.

The Eocene-to-Oligocene transition is known in the fossil record as the Grande Coupure, the "Big Cut" in French, because it marks a massive extinction of life in both marine and land environments. Scientists believe the drop in temperature was likely due to changes in oceanic currents, MacFadden said.

"Fossil mammals are archives of ancient information," MacFadden said. "Their teeth are like little time capsules that allow us to analyze chemicals captured millions of years ago within the animals' skeletons."

MacFadden said 49 of the 68 fossil teeth analyzed came from the Florida Museum's vertebrate paleontology collection. Researchers analyzed oxygen and carbon isotopes in the preserved teeth and bones of primitive fossil horses and a primitive cloven-hoofed mammal called an oreodont. Isotopes are atoms of naturally occurring elements, characterized by varying numbers of neutrons but constant numbers of protons. Oxygen isotopes act as thermometers, telling scientists at what temperature they were formed; and carbon isotopes act as barometers, revealing relative humidity.

"A combined analysis of the isotope composition of bones and teeth is a new approach to studying this boundary in time," said Alessandro Zanazzi, a doctoral student in geology at the University of South Carolina and lead author of the paper. "Tooth enamel has very low porosity and low organic matter, so it maintains the isotopic composition of when it was formed."

Donald R. Prothero, a professor of geology at Occidental College and an expert on the Eocene-to-Oligocene transition, said, "We have long known that there were some dramatic climatic changes in the earliest Oligocene based on the record of marine plankton and isotopes. But we didn't know how much change there was in degrees, although the plant changes suggested it was indeed about 15 degrees."

Prothero also said gaps in the fossil record from Nebraska may have prevented researchers from obtaining detailed temperature data, and he hopes further studies will be completed at other sites such as Wyoming.

Note: This story has been adapted from a news release issued by University of Florida.