A University of Florida-led study has determined that Titanis walleri, a prehistoric 7-foot-tall flightless “terror bird,” arrived in North America from South America long before a land bridge connected the two continents.

UF paleontologist Bruce MacFadden said his team used an established geochemical technique that analyzes rare earth elements in a new application to revise the ages of terror bird fossils in Texas and Florida, the only places in North America where the species has been found. Rare earth elements are a group of naturally occurring metallic elements that share similar chemical and physical properties. 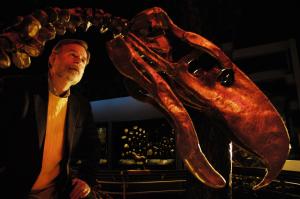 "We found that the Titanis fossils were 2 million years old and not 10,000 years old as had been suggested," said University of Florida paleontologist MacFadden. "This also shows the last known occurrence of Titanis in the fossil record and reflects its extinction." (Image courtesy of Florida Museum of Natural History)

“It was previously thought that Titanis immigrated to Texas across the Panamanian land bridge that formed about 3 million years ago connecting North and South America,” said MacFadden, a curator of vertebrate paleontology at the Florida Museum of Natural History at UF. “But the rare earth element analysis of a fossil Titanis bone from Texas determines its age to be 5 million years old. This shows that the bird arrived 2 million years before the land bridge formed, probably across islands that formed what today is the Isthmus of Panama.”

The study will be published Jan. 23 in the online version of the journal Geology and featured in its February print edition.

The terror bird was carnivorous, weighed about 330 pounds, had powerful feet and a head larger than a man’s. It is known in the fossil record from a single toe bone in Texas, and in Florida by about 40 bone fragments from different skeletal regions. MacFadden’s team also analyzed six specimens from the Santa Fe River in north Central Florida.

“We found that the Titanis fossils were 2 million years old and not 10,000 years old as had been suggested,” MacFadden said. “This also shows the last known occurrence of Titanis in the fossil record and reflects its extinction.”

When an animal dies, its porous bones absorb groundwater as they fossilize. As the local groundwater conditions change, the rare earth elements’ concentrations change, resulting in a unique chemical signature.

Geologists have used the technique to study igneous and metamorphic rocks, but only one other researcher worldwide has applied this technique to date the age of fossils: professor Clive Trueman from the University of Southampton in England.

“It is very difficult to assess the age of fossil bones directly as they are too old to be carbon dated,” Trueman wrote in an e-mail. “Bones can also be moved after death, further confusing their true age. MacFadden’s approach compares bones of disputed age with those of known age. If the chemistry matches, the bones are of the same age irrespective of their final resting place.”

David Gradstaff, a professor and chairman of the geology department at Temple University, said the technique is timely and important.

“If a fossil gets moved or reworked from its place of formation, it will have a fingerprint that is different from the others nearby,” Grandstaff said. “Who knew that all these fossils essentially have a tag that says ‘hey, I’m from over here!’ ”

Co-authors of the study include Richard Hulbert Jr. of the Florida Museum of Natural History; Joann Labs-Hochstein, who at the time of the study was a postdoctoral student of MacFadden’s; and Jon Baskin of Texas A&M University.

Note: This story has been adapted from a news release issued by University of Florida.