Researchers have constructed a protein out of amino acids not found in natural proteins, discovering that they can form a complex, stable structure that closely resembles a natural protein. Their findings could help scientists design drugs that look and act like real proteins but won't be degraded by enzymes or targeted by the immune system, as natural proteins are. 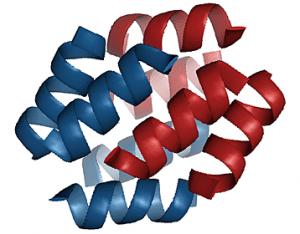 Structure of the Zwit-1F beta-peptide bundle as determined by x-ray crystallography. The bundle contains eight copies of the beta-peptide Zwit-1F with parallel and antiparallel helices in like and unlike colors, respectively. (Image Credit: Douglas S. Daniels)

The researchers, led by Howard Hughes Medical Institute (HHMI) professor Alanna Schepartz, report their findings in the February 14, 2007, issue of the Journal of the American Chemical Society, published in advance online on January 19, 2007. Schepartz and her coauthors, Douglas Daniels, James Petersson, and Jade Qiu, are all at Yale University. A story in the February 5, 2007, issue of Chemical & Engineering News spotlighted the research.

As an HHMI professor, Schepartz received a $1 million grant to find ways to infuse undergraduate teaching with the excitement of research. Several of her HHMI undergraduates synthesized beta-amino acid monomers that were used to prepare the synthetic protein.

Schepartz and colleagues built the short protein, or peptide, from β-amino acids, which, although they exist in cells, are never found in ribosomally produced proteins. β-amino acids differ from the alpha-amino acids that compose natural proteins by the addition of a single chemical component—a methylene group—into the peptide backbone.

“The fundamental insight from this study is that β-peptides can assemble into structures that generally resemble natural proteins in shape and stability,” Schepartz said. She added that their findings about the structure of the molecule that she and her colleagues synthesized will help scientists construct more elaborate β-peptide assemblies and ones that possess true biologic function.

Such β-peptides could also be designed as pharmaceuticals that would be more effective than natural protein drugs, because the enzymes that degrade natural proteins would not affect them.

To biochemists, a protein's chain-like amino acid sequence is considered its primary structure. Its secondary structure is produced when this chain folds, forming characteristic shapes such as helices. The three-dimensional arrangement of these shapes gives a protein what is known as its tertiary structure. Each of these levels of organization is crucial to determining a protein's function.

In previous studies, researchers had shown that β-peptides could fold from their chain-like primary structure into more complex secondary structures. But these synthetic β-peptides adopted very little or poorly defined tertiary structure, and no one had yet shown that a β-peptide could self-assemble into the kinds of stable bundles of spiral-shaped helices that are characteristic of natural proteins, Schepartz said.

In their studies, Schepartz and colleagues synthesized a β-peptide they called Zwit1-F. They allowed the chain of β-amino acids to assemble into its own structure and then analyzed it with x-ray crystallography, a technique in which x-rays are directed through a crystal of a protein so that its structure can be deduced from the resulting diffraction pattern.

The researchers found that the Zwit1-F peptide folded into a bundle of coiled helices that resembled those in natural proteins. In particular, Schepartz noted that both natural proteins and the β-peptide bundle folded in ways that placed the “water-hating” hydrophobic segments of the molecule in the core of the structure. Other features, too, were remarkably similar to a coiled helix bundle formed of α-amino acids.

“What is interesting about the β-peptide bundle is its similarity to α-helical bundles when viewed from afar,” she said. “It has a massive hydrophobic core, parallel and antiparallel helices, and an array of polar side chains on the surface. Looking from a distance, you'd say this was a helical bundle protein.”

There were significant differences, however. “Only when you look at the details, does it become clear that there are differences between the β-peptide structure and natural helical bundle proteins,” Schepartz said. For example, when helices of natural peptides nestle against one another, often their “side chains” extend from the sides of each helix, fitting together like ridges in grooves. The β-peptide helices, however, are structured so that their side chains alternate like interlocking fingers.

Schepartz said that the discovery of the tertiary helical bundle structure of Zwit1-F offers a “structural blueprint” for the design of more complex β-peptides that would function like natural proteins. Natural proteins, for example, operate as enzymes that catalytically guide chemical reactions in the cell.

Schepartz and colleagues now want to try to bind metal ions to the Zwit1-F structure. Metal ion binding would enable the researchers to begin designing enzymes based on the β-peptide, she explained. “We're also interested in generating versions that can assemble in membranes, as a first step toward making transmembrane proteins composed of β-amino acids,” she said.

One of the most exciting potential results of their finding could be design of β-peptide drugs. “There is growing interest in proteins as drugs,” said Schepartz. “And although certain proteins are very effective pharmaceuticals, protein drugs generally suffer from storage and stability problems outside the body and from degradation inside the body. β-peptides may be more stable than traditional protein drugs and would not be recognized by the proteases that destroy proteins in the cell.”

Schepartz said their discovery that the β-peptide Zwit1-F structurally resembles natural peptides raises a thorny biological question: Why don't β-peptide proteins exist in nature? "Certain β-amino acids are naturally synthesized in cells, and they are even loaded onto transfer RNA molecules that carry the amino acid components to the protein-making machinery of the cell, the ribosome," she noted. “But to my knowledge, there are no ribosomally constructed proteins that contain β-amino acids,” she said.

“The most provocative finding of this paper is that β-amino acids were not avoided as the building blocks of proteins because they cannot assemble into complex structures,” she said. “We've shown that clearly they can."

Jack Szostak, an HHMI investigator at Harvard Medical School who studies the origin of function of nucleic acid and peptide molecules, commented: "This paper shows that protein-like folded structures can be formed by molecules that are protein-like but have chemically distinct backbones. This is conceptually similar to recent demonstrations by Eschenmoser, Herdewijn, Benner, etc., that many nucleic acids that are chemically distinct from RNA and DNA can still form base-paired duplexes. In both cases, the implication is that biology uses its standard macromolecules not because they are uniquely suited to their tasks, but at least in part because of other considerations, such as ease of synthesis, or possibly historical accident."

Note: This article has been adapted from a news release issued by Howard Hughes Medical Institute.