For the over four billion years that our terra firma has been around, meteorites have been hurtling through the atmosphere at high speeds toward its surface. and some argue that resulting debris may have included carbonaceous chondrites — a class of meteorite whose members contain significant amounts of water and small molecules, such as amino acids - and could have contributed to the evolution of life on Earth.

Like the multiverse and other science fiction, without a plausible mechanism for that it is just a guess, but recent lab experiments showed that reactions between simple molecules, such as ammonia and formaldehyde, can synthesize amino acids and other macromolecules, but liquid water and heat are required. Radioactive elements, such as aluminum-26 (26Al) — which is known to have existed in early carbonaceous chondrites — release gamma rays, a form of high-energy radiation, when they decay. This process could have provided the heat needed to make biomolecules. 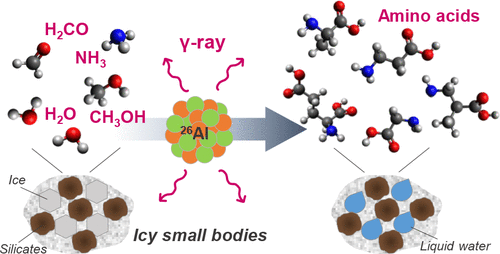 In new work, researchers dissolved formaldehyde and ammonia in water, sealed the solution in glass tubes and then irradiated the tubes with high-energy gamma rays produced from the decay of cobalt-60. They found that the production of α-amino acids, such as alanine, glycine, α-aminobutyric acid and glutamic acid, and β-amino acids, such as β-alanine and β-aminoisobutyric acid, rose in the irradiated solutions as the total gamma-ray dose increased. Based on these results and the expected gamma ray dose from the decay of 26Al in meteorites, the researchers estimated that it would have taken between 1,000 and 100,000 years to produce the amount of alanine and β-alanine found in the Murchison meteorite, which landed in Australia in 1969.

They believe their study provides evidence that gamma ray-catalyzed reactions can produce amino acids, possibly contributing to the origin of life on Earth.
News Articles
More Articles All Articles
About