Picture the flow of water over a rock. At very low speeds, the water looks like a smooth sheet skimming the rock's surface. As the water rushes faster, the flow turns into turbulent, roiling whitewater that can overturn your raft.

Turbulence is important in virtually all phenomena involving fluid flow, such as air and gas mixing in an engine, ocean waves breaking on a cliff and air whipping across the surface of a vehicle. However, a comprehensive description of turbulent fluid motion remains one of physics' major unsolved problems. 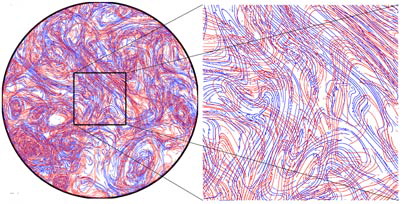 MIT visualization of the chaotic tangle underlying turbulence. Area in black box represents a blown-up portion of the fluid showing the self-similarity of the tangle. Graphic courtesy / George Haller

Now, in a paper to be published in an upcoming issue of Physical Review Letters, MIT researchers report that they have visualized for the first time a convoluted tangle underlying turbulence. This work may ultimately help engineers design better planes, cars, submarines and engines.

Researchers have long suspected that there's a hidden but coherent structure underlying turbulence's messy complexity, but there has been no objective way of identifying it, said MIT research group leader George Haller, professor of mechanical engineering, who also heads Morgan Stanley's Mathematical Modeling Center in Hungary.

"The fluid mechanics community has not reached a consensus even on an objective definition of a vortex, or whirlpool effect, let alone the definition of structures forming turbulence. The mathematical techniques we have developed give a systematic way to identify the material building blocks of a turbulent flow," Haller said.

To picture the skeleton of turbulence, the MIT researchers analyzed experimental data obtained from co-authors Jori Ruppert-Felsot and Harry Swinney of the University of Texas at Austin. The Texas group used water jets to force water from below into a rotating tank of fluid. They seeded the resulting complicated flow with luminescent buoyant particles. When illuminated with a laser, the miniscule polystyrene spheres were visible as they raced around the vortices and jets.

While the particles looked cool, "most important to our analysis were the particles' velocities, which our collaborators obtained by recording the particles' motion with a high-resolution camera, then using a software tool to figure out which particle moved where in a split second," Haller said. "This gave us a high-quality map of the whole velocity field of the turbulent flow at each time instance."

Using involved mathematical tools, Mathur uncovered a convoluted tangle embedded in the flow. "With this approach, we isolated the very source of turbulent mixing, not just its effect on dye or smoke as earlier studies did," said Mathur.

The complexity they found surprised the MIT team. They knew that in turbulent flow, unsteady vortices appear on many scales and interact with each other. What they didn't know was that the complicated, constantly evolving flow patterns are driven by two competing armies of particles constantly being pulled together and pushed apart.

Imagine that the particles visible in the turbulent water are like an army of ants being chased through a bowl of mixed-up red and blue spaghetti. "The ants love red spaghetti and want to stay close to it, but they hate blue spaghetti and won't touch it. And they have to keep running in the bowl under these constraints, stuck in an endless maze forever," said Haller.

The resulting images, which look like dense, tangled masses of blue and red fibers, are snapshots of this stunning, constantly deforming structure. "The chaotic tangle forms the skeleton of turbulence as fluid is simultaneously attracted to, and repelled by, its different components," Haller said.

The MIT researchers call their discovery the "Lagrangian skeleton" of turbulence because their particle-based approach is motivated by the work of 19th-century mathematician Joseph-Louis Lagrange. "Lagrange developed mathematical tools still used today for calculating mechanical and fluid motion," said Peacock.

Among many applications, the new results promise to aid the early detection of clear air turbulence that causes those unexpected jolts in airplanes; they may also help control the spread of oceanic pollution. "Most certainly, they will lead to a better appreciation of ants running in a bowl of spaghetti," said Haller.

Written from a news release by .