Ultrafast intramolecular electronic charge separation during photo-chemical reactions cause up to tenthousand surrounding molecules to perform aligning pirouettes. Researchers observed for the first time such light induced reorientations in an organic molecular crystal.

In their study they initiated a separation of positive and negative electronic charge in a small number of particular molecules with extremely short light pulses. In turn the surrounding molecules responded by aligning their respective dipole axes along the photoinduced electric fields. The researchers observed this fundamental process for the first time by means of femtosecond x-ray diffraction with high spatial precision and in real time. 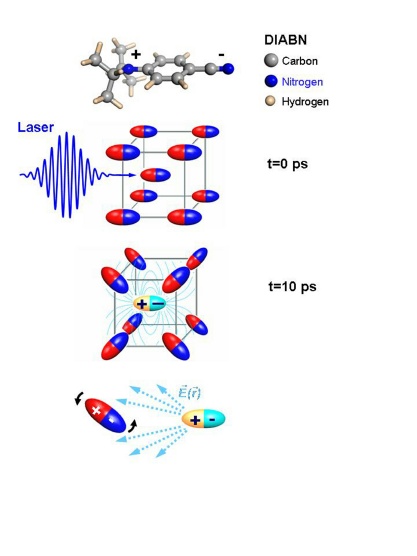 In a crystal 4-(diisopropylamino)benzonitrile (DIABN) molecules (shown as red and blue) with positively and negatively charged end groups are arranged regularly. At time t=0 ps an ultrashort laser puls excites particular molecules (shown as yellow and light blue) inducing an increase of charge separation. In the electric fields arising in the course of this process about tenthousand neighbouring molecules reorient on an ultrashort time scale of 10 ps. These molecular rotations are a consequence of angular momenta generated by the (spatially inhomogeneous) electric fields E(r). The ultrafast alignment process is monitored for the first time by diffraction of femtosecond x-ray pulses with high spatial precision and in real time.

In nature chemical and biochemical reactions are strongly influenced by the surroundings, for instance water, a macromolecular or crystalline environment.
During the course of reaction the structure of the surroundings changes considerably, which in turn determines backwards the reaction speed and the stability of the reaction products. Quite often such processes occur in the time regime of picoseconds, i.e. shorter than a millionth of a millionth of a second.

Ultrafast x-ray pulses provide a sequence of “x-ray snapshots” which directly image the structure of the molecular surroundings during the photoinduced reaction. From those x-ray pictures the separation and orientation of the molecules is deduced. For the generation of x-ray pulses, the scientists from Berlin and Munich used a tabletop femtosecond laser system, a method that is complementary to the planned large-scale free electron x-ray lasers.

In order to resolve changes of molecular distances and orientations simultaneously the researchers chose a crystal made of periodically ordered
4-(Diisopropylamino)benzonitrile (DIABN) molecules as a model system. They were successful in detecting structural changes in the molecular surroundings with a precision of fractions of an atomic diameter. They found that the charge separation in the photo-excited molecules generates electric fields forcing molecules in the vicinity to rotate up to angles of 10 degrees. Due to the distant action of electric fields up to tenthousand surrounding molecules participate in this process. The molecular rotations take place without detectable delay with respect to the intramolecular charge separation occuring within 10 picoseconds. The separation of lattice planes is left unchanged. 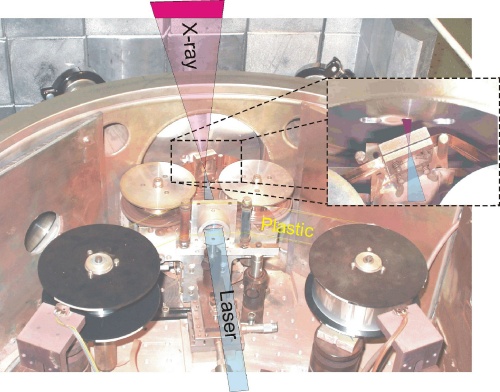 The photograph shows the inside of a vacuum chamber, in which a high-intensity laser beam (blue) is focused into a very small spot (diameter 1/100 millimeter) by a regular lens. The strong electric field of the laser pulses extracts electrons from the metal surface and accelerates them to one third of the velocity of light. These fast electrons generate high energetic x-rays in the copper tape by means of the same mechanism which is used in conventional x-ray tubes. The wavelength of x-rays (1.5 Ångströms) is smaller than the distance between atoms in a solid, and 3000 times smaller than the wavelength of visible light. The duration of an x-ray flash is 0.1 picoseconds, as short as the laser pulse used to generate it (1 picosecond = 1 millionth of a millionth of a second). This is the exposure time of the x-ray camera.

The novel experiments with an unprecedented spatial and temporal resolution show that in nature local chemical reactions cause structural changes in a spatially extended vicinity on ultrafast time scales via electric fields. Such studies pave the way to investigations of more complex systems right up to crystalline biological macromolecules. Besides laser-driven x-ray sources ultrashort x-ray pulses from free electron lasers will be used in future for such investigations, e.g. the XFEL in Hamburg which is currently under construction.