Using Chandra, scientists surveyed a sample of clusters and counted the fraction of galaxies with rapidly growing supermassive black holes, known as active galactic nuclei (or AGN). The data show, for the first time, that younger, more distant galaxy clusters contained far more AGN than older, nearby ones.

Galaxy clusters are some of the largest structures in the Universe, consisting of many individual galaxies, a few of which contain AGN. Earlier in the history of the universe, these galaxies contained a lot more gas for star formation and black hole growth than galaxies in clusters do today. This fuel allows the young cluster black holes to grow much more rapidly than their counterparts in nearby clusters. 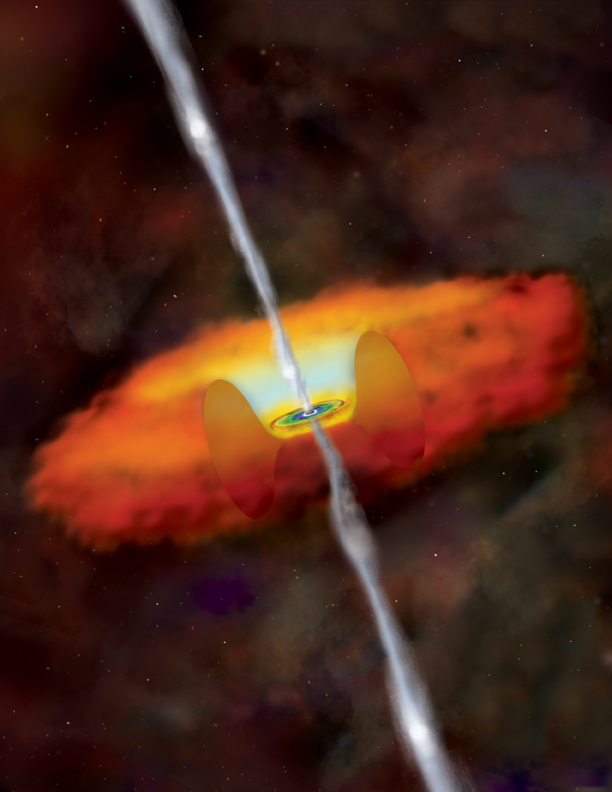 An artist's conception of a rapidly growing black hole, otherwise known as an active galactic nucleus (AGN), in the center of a galaxy. (Illustration: NASA/CXC/M.Weiss)

"The black holes in these early clusters are like piranha in a very well-fed aquarium," said Jason Eastman of Ohio State University (OSU) and first author of this study. "It's not that they beat out each other for food, rather there was so much that all of the piranha were able to really thrive and grow quickly."

The result was the more distant clusters contained about 20 times more AGN than the less distant sample. AGN outside clusters are also more common when the Universe is younger, but only by factors of two or three over the same age span.

"It's been predicted that there would be fast-track black holes in clusters, but we never had good evidence until now," said co-author Paul Martini, also of OSU. "This can help solve a couple of mysteries about galaxy clusters."

One mystery is why there are so many blue, star-forming galaxies in young, distant clusters and fewer in nearby, older clusters. AGN are believed to expel or destroy cool gas in their host galaxy through powerful eruptions from the black hole. This may stifle star formation and the blue, massive stars will then gradually die off, leaving behind only the old, redder stars. This process takes about a billion years or more to take place, so a dearth of star-forming galaxies is only noticeable for older clusters.

The process that sets the temperature of the hot gas in clusters when they form is also an open question. These new results suggest that even more AGN may have been present when most clusters were forming about ten billion years ago. Early heating of a cluster by large numbers of AGN can have a significant, long-lasting effect on the structure of a cluster by "puffing up" the gas.

"In a few nearby clusters we've seen evidence for huge eruptions generated by supermassive black holes. But this is sedate compared to what might be going on in younger clusters," said Eastman.