In the children’s game "red light green light," winners are able to stop, and take off running again, more quickly than their comrades. New research reveals that a similar race goes on in our brains, with impulse control being the big winner.

"The research provides new insights into how the brain controls movements, which helps explain the impulsivity of people with attention deficit and hyperactivity disorder," study co-author Jeffrey Schall, E. Bronson Professor of Neuroscience at Vanderbilt University, said. "It also shows how mathematical models can be used to discover how the brain produces thought and action." 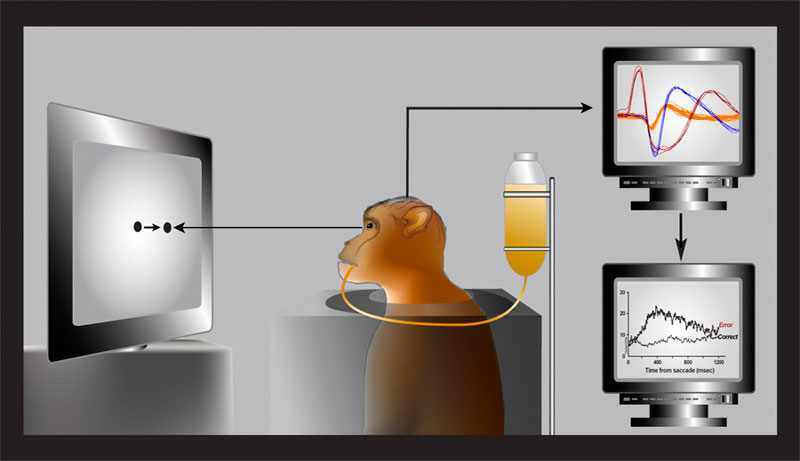 In order to record the brain activity of macaques during eye movements, the researchers teach them how to do various visual tasks by rewarding them with juice drinks. Credit: Barbara Martin

The new paper uses physiological data collected in Schall’s laboratory to show how a theoretical model Logan developed more than 20 years ago is implemented by the brain.

"I developed the race model to explain behavior on a task called the stop signal task with a friend of mine, William Cowan, who is a theoretical physicist, in the 1980s," Logan, Centennial Professor of Psychology, said. Stop signal tasks measure an individual’s ability to stop a planned action, like pressing a key on a keyboard or looking at a target, in response to a signal. "Our race model proposed that two independent processes were underway, one telling us to ‘go’ and one telling us to ‘stop’ in response to the stop signal.

"Applying the model to children’s behavior revealed that stop signal task times are significantly longer in children with attention deficit and hyperactivity disorders than in other children," he said.

The model has been widely accepted and has also been used to explain cognitive problems in people with obsessive-compulsive disorder, schizophrenia and Parkinson’s disease.

"We think of people who are impulsive as acting too quickly," Logan said. "Kids with ADHD are actually slower on the ‘go’ task than the control kids. It’s not that they go too quickly; they stop too slowly."

"The model proposes that there are two processes happening in our brain, one making us ‘go’ and another making us ‘stop,’" Boucher, a postdoctoral fellow, said. "However, as neurophysiologists, we know these processes are intricately linked, not independent. Our goal with this paper was to resolve that paradox."

To answer this question, the researchers applied the independent race model to existing data from experiments that monitored brain activity in monkeys while they were performing a visual stop signal task. In those experiments, the monkeys were taught to look at a visual target unless a stop signal came on, in which case they were supposed to refrain from looking at the target.

"We knew that the neurons responsible for the ‘go’ and ‘stop’ actions were located in the parts of the brain that control movements," Boucher said. "Each trial began with the illumination of a target in the periphery that the subject was supposed to look at. This is when the ‘go’ unit was activated. Sometimes a ‘stop’ signal came on and the subject had to inhibit their eye movement. This is when the ‘stop’ unit was activated."

The researchers found that the results predicted by the model and those shown by the neural activity matched.

"For most of the race, ‘stop’ and ‘go’ act independently. ‘Stop’ interacts with ‘go’ very briefly—it basically has one chance to knock ‘go’ out of the race. It needs to react strongly and rapidly after the stop signal is given," Schall said. "If it is successful, the subject stops his or her planned movement. If it is unsuccessful, the subject goes ahead. In individuals with impulse control problems, ‘stop’ more often loses the race."

The findings are some of the first to bridge cognitive research and neurophysiology—making the connection between the mind and the brain.

"You develop a model to explain behavior and in many ways it’s just made up," Logan said. "But then you find out that it says something about what the neurons are doing, and that’s exciting."