Two biologists at Penn State have discovered a master regulator that controls metabolic responses to a deficiency of essential amino acids in the diet. They also discovered that this regulatory substance, an enzyme named GCN2 eIF2alpha kinase, has an unexpectedly profound impact on fat metabolism. "Some results of our experiments suggest interventions that might help treat obesity, prevent Type II diabetes and heart attacks, or ameliorate protein malnutrition," said Douglas Cavener, professor and head of the Department of Biology, who led the research along with Feifan Guo, a research assistant professor. Their research will appear in the 7 February 2007 issue of the scientific journal Cell Metabolism. 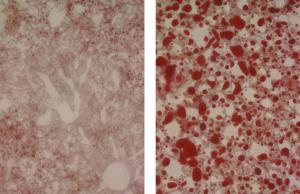 Organisms adapt metabolically to episodes of malnutrition and starvation by shutting down the synthesis of new proteins and fats and by using stores of these nutrients from muscle, fat, and the liver in order to continue vital functions. Cavener and Guo found that the removal of a single amino acid, leucine, from the diet is sufficient to provoke a starvation response that affects fat metabolism. "These findings are important for treating two major problems in the world," Cavener says. "The starvation response we discovered can repress fat synthesis and induce the body to consume virtually all of its stored fat within a few weeks of leucine deprivation. Because this response causes a striking loss of fatty tissue, we may be able to formulate a powerful new treatment for obesity."

The second problem is not excess food intake but insufficient protein intake, which plagues the populations of the poorer nations of Asia and Africa. The Food and Agriculture Organization of the United Nations estimates that 850 million people were malnourished between 1999 and 2005.[1] Those who eat a diet with sufficient calories that is lacking in an essential amino acid may suffer from stunted growth, developmental disorders, or even death. On the other hand, obesity is reaching near-epidemic proportions in wealthier nations. According to the Centers for Disease Control, 30 percent of U.S. adults over the age of 20 are obese.[2]

Rather than working with cells in culture, Guo and Cavener examined metabolic processes in a special strain of mice that lacks the GCN2 kinase and compared them with those of normal mice. "Organisms are remarkably sensitive to dietary intake," Cavener says. "Being deprived of even one essential amino acid is enough for the GCN2 kinase to switch the metabolism into an emergency mode. Despite the fact that these mice are consuming normal amounts of carbohydrates and fats, they rapidly shut down fat synthesis in the liver and mobilize their stored fat deposits. Their bodies are literally tricked into a starvation mode."

One of the especially encouraging aspects of the research by Guo and Cavener was the short time frame in which dramatic changes could be induced. Even after only 7 days of leucine deprivation, the normal mice lost 50 percent of their fatty tissue. They also produced fewer lipids (fats) and showed a small drop in serum triglyceride levels. The mice lacking the GCN2 kinase did not lose as much fat as the normal mice did and, in addition, they developed very pale, fatty livers with unusually high levels of stored triglycerides because they continued to synthesize fatty acids. The remarkable rapidity of the weight change in the normal mice occurred because the repressed synthesis of new fats was coupled with the depletion of stored fats in the body.

These findings about the crucial regulatory role of GCN2 kinase in the metabolism have major implications for the treatment or prevention of obesity, which is associated with increased risk for heart disease, diabetes, hypertension, and osteoarthritis. "Most of all," Cavener says, "we hope to be able to devise dietary interventions that will significantly improve the health of millions of children all over the world who suffer from amino acid deprivation associated with protein malnutrition."

The research was funded by the National Institutes of Health and the Pennsylvania Department of Health.

Note: This article has been adapted from a news release issued by Penn State.