In suspicious environments, like bars and math study groups, females are at greater risk. Scientists from Seoul National University, in Korea, and the Smithsonian Tropical Research Institute in Panama have recently done a study to determine how females avoid the bad males while assessing the good ones.

The males peacock’s showy plumage, for example, is thought to attract females with the promise of better offspring. Showy male peacocks also escape from predators despite their annoyingly conspicuous ornaments and behavior — proof of their superiority. 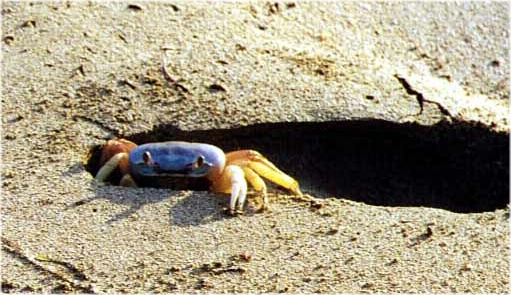 Need a place to hide? I have a big claw

"In our study of fiddler crabs, the strength of female preference for a male signal that increases her own survival increases with her perceived risk of predation. That a female’s choice of a mate is based on sexual signals that benefit her directly is a fundamentally new and perhaps widely applicable idea," said Tae Won Kim, who did this work as a student at Seoul National University and is now a post-doctoral fellow at Ewha Women’s University in Korea.

Female fiddler crabs quickly assess all the waving claws and the hoods and invariably prefer males with hoods to males without.

"When we bait predatory birds into the area—artificially increasing the risk of predation, females show an even greater preference for males who have built hoods," said STRI staff scientist John Christy, who has studied sexual selection in this group for nearly 35 years. This study illustrates how the ecology of choosing a mate can shape sexual communication. "Conspicuous male sexual signals need not advertise the quality of the signaler as a mate," Christy suggests. "Some may simply allow choosy females to stay safe."