The James Clerk Maxwell Telescope (JCMT) on Mauna Kea in Hawaii has a new way to look at the Universe, thanks to two revolutionary instruments called HARP and ACSIS. These instruments operate together, and they recently sliced through the Orion Nebula, recording for the first time the internal movements of its star-forming gases.

Orion is one of the most famous and recognisable constellations in the sky. At its heart, it harbours a vast cloud of gas and dust, the Orion Nebula, which is undergoing a burst of star formation. Astronomers refer to this and other similar regions as "stellar nurseries". Within this cloud, gas and dust extend over vast regions and help to "feed" the star formation. Gravity takes the gas and dust in these clouds and compresses it into stars.

HARP and ACSIS allow astronomers to see the motion of this gas with a clarity and precision not previously available at these wavelengths. Together they give the JCMT the powerful ability to record information in three dimensions. Unlike the previous generation of receiver systems, HARP/ACSIS can produce camera-like images of the sky across thousands of adjacent wavelengths simultaneously; forming a three-dimensional image set called a "spectral cube". The wavelength dimension permits the telescope to sense molecular tracers as well as to detect the motions of the gas.

These slices of wavelength reveal to astronomers the chemical make-up of our Galaxy and others in the Universe. There are many gas molecules that exist in space which emit radiation at wavelengths that HARP/ACSIS can tune to. The JCMT observes in the sub-millimetre range of wavelengths, much smaller wavelengths than a typical radio station, but much longer wavelengths than light waves. The naturally occurring emission from gas and dust in the material between the stars is particularly effective at revealing the processes of material accumulation to form stars. This process is still mysterious in its details, and the HARP/ACSIS receiver system on the JCMT is exquisitely tuned to study the precise constituents and motions of the gas and dust as it collapses to form stars. And that makes this instrument the perfect tool to examine the Orion Nebula. 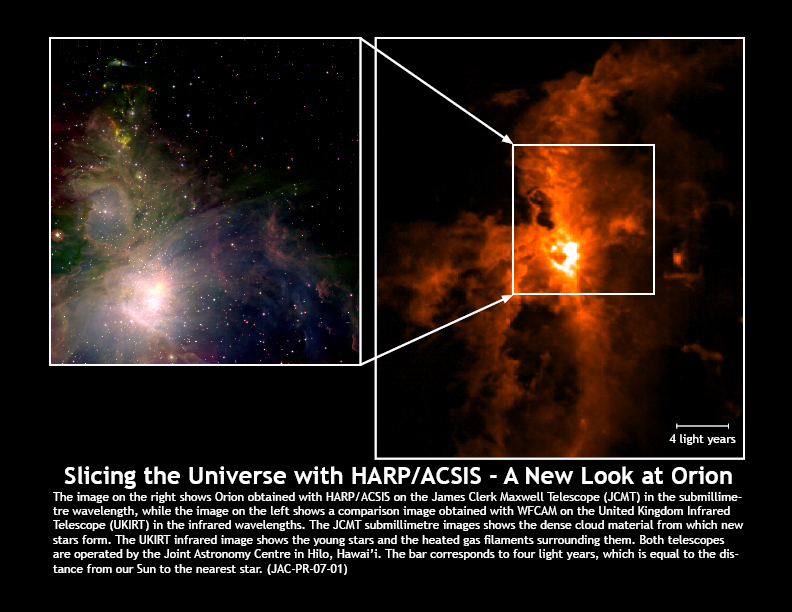 CLICK IMAGE FOR FULL SIZE. The image on the right shows Orion obtained with HARP/ACSIS on the James Clerk Maxwell Telescope (JCMT) in the submillimetre wavelengths, while the image on the left shows a comparison image obtained with WFCAM on the United Kingdom Infrared Telescope (UKIRT) in the infrared wavelengths. The JCMT submillimetre image shows the dense cloud material from which new stars form. The UKIRT infrared image shows the young stars and the heated gas filaments surrounding them. Both telescopes are operated by the Joint Astronomy Centre in Hilo, Hawaii. The bar corresponds to four light years, which is equal to the distance from our Sun to the nearest star. Credit: STFC

The information that is recorded along the third "wavelength" dimension shows how much the gas molecules, in this case carbon monoxide, are radiating and how fast they are moving. We see gas with large motions both towards us and away from us at velocities approaching and exceeding 200 km/s (that's nearly half a million miles an hour). These velocity slices can be combined into a movie, allowing us to see that the hot nebula at the centre, where star formation is occurring most vigorously, is forcing gas out in what is called a "Champagne flow".

Dr. John Richer of the Cavendish Laboratory at the University of Cambridge (UK) says: "It's taken a long time to get to this point
- the first science data from HARP/ACSIS - but it's been worth the wait. For the first time, we can make large-scale maps of the warm gas in molecular clouds and so begin to understand in detail the complex and spectacular processes which occur when stars form."

HARP (Heterodyne Array Receiver Programme) is an array of 16 spectral receivers, arranged in a 4x4 grid and using superconducting junctions as the detector elements. ACSIS (AutoCorrelation Spectrometer and Imaging System) is a system of high-speed digital electronics and computers for analysing the signals produced by HARP and other instruments. It contains more than 1000 customised chips and 30 microprocessors for handling the high data rate and producing results in a form that astronomers can use. ACSIS produces data at a rate 1000 times faster than the old JCMT system. Together these instruments have turned the JCMT into a sub-millimetre-wave 3-D camera rather than just a single-point telescope.

Dr. Bill Dent of the Royal Observatory Edinburgh says:" We often find gas clouds many tens of light-years across containing hundreds of stars all forming simultaneously. With this new system, we can map the structure and measure the speed of the gas that's forming all these new stars and, furthermore, do a chemical analysis, perhaps looking for regions rich in rare and exotic molecules. Before HARP/ACSIS arrived, it was just not possible to study and understand whole clouds in this way."

"It's really exciting to see science pouring out of this instrument at long last," says Professor Richard Hills of the Cavendish Laboratory, the Project Scientist for HARP. And Dr. Harry Smith, HARP Project Manager, says: "It was great to work on what turned out to be a world-beating facility instrument."

Dr. John Richer has used the JCMT for 19 years to make spectroscopic observations of molecular clouds. "It used to be a painstaking and slow process. Now with HARP's 16 sensitive detectors, we can take data at a much more rapid rate and begin to answer much more ambitious questions about the formation of new star systems.
HARP/ACSIS is revolutionising our view of star formation in the galaxy," said Richer.

Professor Gary Davis, Director of the JCMT, said "ACSIS and HARP have been developed over the last several years by a network of instrumentation laboratories around the world. By making use of the very latest technologies, we have introduced a new capability at the observatory which cannot be matched anywhere in the world.
Astronomers will now be able to study star-forming regions such as Orion with unprecedented scope and detail. We are really excited about the science that these instruments will make possible for the first time."