From roundworm to human, most cells in an animal’s body ultimately come from stem cells. When one of these versatile, unspecialized cells divides, the resulting “daughter” cell receives instructions to differentiate into a specific cell type. In some cases this signal comes from other cells. But now, for the first time, researchers at the Carnegie Institution’s Department of Embryology have found a type of stem cell that directly determines the fate of its daughters. 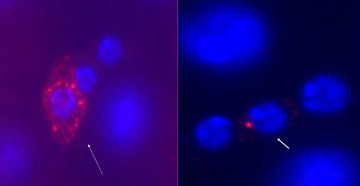 The finding, reported in the January 25 online edition of the journal Science, could transform our basic understanding of stem cells by demonstrating that some tissues maintain themselves throughout life. It could also prove valuable in the fight against some cancers.

“We found that stem cells can participate actively in determining what type of cell their daughters will become right at the moment of stem cell division,” said Embryology director and study co-author Allan Spradling. “This suggests that tissue stem cells might not just be a source of new cells, but could actually be the ‘brains’ of the tissue—the cells that figure out what type of new cell is needed at any given moment.”

Because they truly can become any cell in the body, “embryonic” stem cells tend to receive a lot of attention. Yet “adult” stem cells remain in fully-developed organisms, where they replace specific cell types lost to age or disease. Spradling and postdoctoral researcher Benjamin Ohlstein performed the study using intestinal stem cells (ISCs), a type of adult stem cell in the fruit fly Drosophila melanogaster that they discovered only a year ago. 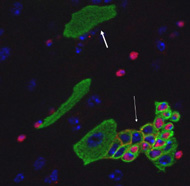 Mutations that disrupt the Delta protein can cause ISCs to produce many tumor cells (thin arrow, bottom) as well as a few normal enterocytes (thick arrow, top).

These cells directly use the “Notch” signaling pathway, a system well-known to biologists, to replenish one of two cell types in the fruit fly’s gut. The fate of any given daughter appears to depend on a protein, called Delta, which sits on the surface of the ISC and activates the Notch pathway in its daughters.

“Delta and the Notch receptor protein are both attached to the surface of cells, and don’t float around freely, so we always have to assume that the Delta signal comes from nearby cells,” Ohlstein said. “But the ISC is literally about as nearby as you can get.”

Most daughters receive a strong Delta signal from the ISC and become enterocytes (ECs)—cells that line the inside of the gut and absorb nutrients. But when the Delta signal is weak, the daughters will become hormone-generating enteroendocrine cells. For every 15-20 ECs it creates, a given ISC will also produce two enteroendocrine cells, usually in matched pairs at the same time.

Spradling and Ohlstein tracked the whereabouts of Delta, Notch, and several other related proteins using fluorescent marker molecules. They found that most ISCs have large amounts of Delta protein. This made it relatively easy to single out ISCs during the experiments—usually a significant challenge with stem cells—and to track where Delta molecules moved over time.

Delta seems to control not just what types of new cells are made, but also puts the brakes on excessive cell division. In several experiments where Delta or other Notch signaling genes were disabled or blocked, the daughter cells continued to divide, eventually producing tumors.

“Each individual stem cell seems to have a great degree of independence from the rest of the animal’s body,” Spradling explained. “On one hand, the ISCs can respond quickly to the needs of the gut lining as it loses cells. On the other hand, they seem rather vulnerable to losing control of cell division.”

It remains to be proven whether ISCs require a specific microenvironment created by neighboring cells, known as a niche, as other types of stem cells in Drosophila and mammals do. Understanding such a niche could have huge implications for the study of certain kinds of cancer, including those of the brain and intestine.

“Our hope is that the distinctive molecular properties of Drosophila ISCs we discovered will now allow mammalian intestinal stem cells to be definitively identified and better studied,” Spradling added.

This article has been adapted from a news release issued by Carnegie Institution.